A city of ruin

This month four years ago, New Zealand's third-largest city, Christchurch, suffered an earthquake that claimed the lives of 185 people from 17 different countries and forced the mammoth rebuilding of a broken city. Herpreet Kaur Grewal visited to see the results - and find out how the city's FMs coped

"By the time we got outside there was liquefaction - wet sediment that seeps to the surface through cracks - running down the street, and a huge plume of dust hanging over the city. People were starting to run back from Cashel Street covered in blood."

This is Vivien Hardie's description of what the centre of Christchurch looked like on the afternoon of 22 February 2011, after suffering what is now on record as the country's second-worst natural disaster in terms of loss of life.

British-born Hardie is the facilities management team leader at Christchurch City Council. "We didn't know how bad it was until we got outside when it hit I remember hanging onto my desk, being thrown forward and my chair shooting out from under me."

As FM at the council's primary Hereford Street offices, it was Hardie's job to evacuate the building. "I switched into sergeant major mode in an instant," she remembers. "I grabbed my fluro (fluorescent jacket) and my hard hat and started barking orders at people, saying 'get out of the building'.

"As I was doing that, the fire alarms were going off, the sprinkler pipes had burst and there was water everywhere. Being the building warden, I was the last person out. And when I met the mayor and CEO outside, I said 'no way, we're not going back in today'."

One of the most immediate concerns in the days and weeks after the earthquake was temporary accommodation - and inevitably, the spotlight fell on facilities management departments to make this happen.

"FM is still a young profession in New Zealand," says Hardie. "But the earthquake brought it to the fore because everyone was saying 'what do we do now? We need temporary accommodation and facilities'. They turned around and looked at us and said 'a-ha! That's what you people are for'."

What's perhaps remarkable is that the 2011 quake was in fact the second suffered by the city in 12 months. In the previous September, an earthquake had struck the county of Canterbury in which Christchurch is situated. Although of greater magnitude than the 2011 quake, its epicentre wasn't central to the city and it happened during the night. A further aftershock occurred in December of that year.

Indeed, Christchurch residents have become accustomed to the possibility of earthquakes, as New Zealand is on a major fault line. However, the 2011 quake - and its focus on central Christchurch - was in another league.

After the quake, many employees worked from home where this was a possibility. Otherwise, businesses started to share facilities - a process of pooling resources that helped feed a sense of community spirit that had emerged post-quake.

In one case, the council had earmarked a warehouse it already owned as a new municipal bus exchange. However, as conversion work had not started, the facility was turned into new office accommodation for employees. "We bought every trestle folding plastic table available in just about all of the South Island," says Hardie, "and we set them up in rows. We just heaped as many people as we were allowed to in there, and that became our temporary accommodation."

Around 350 council employees were also housed in the art gallery building, a space funded by Christchurch City Council. The building had been used as Christchurch's Emergency Operations Centre (EOC) following the 2010 Canterbury earthquake, so was pressed into service again following the February 2011 quake.

Furthermore, two of Christchurch's biggest libraries - in the suburbs of Fendalton and upper Riccarton - were cleared of books to allow for 100 council employees to be accommodated in each building.

"These buildings became the main sites for the council over the year," says Hardie.

Opus, a property asset management company in New Zealand, had to relocate the Canterbury Catholic Diocese, which have approximately 37 schools and various parishes.

Anthony Van Meer, property services manager for Opus, says: "We relocated a primary school and a secondary school. One primary school had to move four times because we had moved them in September but then had to move them again in February. We moved a 300-kid primary school four times in six months. It was pretty tough on the parents and the kids. We had to bus the kids to new locations. We moved a secondary school - Marian College. Their site was too close to a small creek, there was a lateral spread and liquefaction issue there. They are never going back. We did a lot of panicked, quick work after the earthquake to find new homes for congregations, schools, clients' offices and so on."

The council also placed 3,000 portable toilets in Christchurch in the absence of sewage facilities. However, Deon Swiggs, director of charity Rebuild Christchurch, says: "Whole streets were missed and there were arguments between different city councillors and government and the agencies. I remember those chaotic times. Everyone was then issued with a chemical toilet. Then, dispensaries were put outside where you could empty your loo. Some people were using those for eight months after the earthquake." 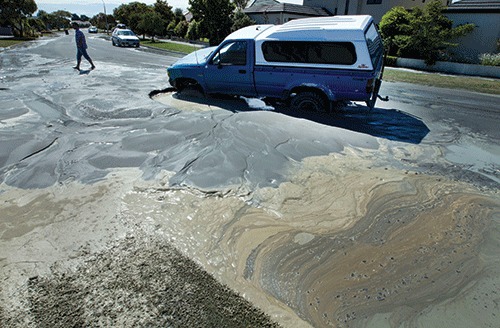 The council's main building on Hereford Street had remained sturdy after the quake, "like a nuclear bunker", according to Hardie. However, "it had to be closed because the plasterboard lining the stairwell walls (called 'Gib', short for Gibraltar Board - a brand of plasterboard in New Zealand) was so badly damaged that it was falling in lumps. All of it had to be replaced.

"As soon as that cracks along the joins, you lose your 60-minute fire rating and you can't occupy your building. You can have all the sprinklers and fire suppression systems in the world, but if your emergency staircases are not safe, that's it - the building has to close."

A lot of the concrete was cracked too and many metres of epoxy crack injections had to be administered across the building in the floors, columns and beams.

Other buildings, however, were not designed to withstand an earthquake. Older buildings like the Catholic Cathedral were too severely damaged for quick repairs (see our front cover). Nicholas Dawe, work group manager for facilities management at Opus, says: "It's pretty hard getting into the basilicaWe couldn't get anyone in for years and we ended up flying a drone into it because none of the engineers were prepared to go in...The building has been mothballed and made stable but is still not safe. It's only 20 to 30 per cent of the new building standard."

The Anglican cathedral in Cathedral Square in the centre of the city - described by some as the "jewel in the crown of Christchurch's renowned Victorian Gothic architecture" - had its spire and part of its tower destroyed, with the remaining structure severely damaged.

A transitional cathedral built nearby by Japanese architect Shigeru Ban for $6 million has come to be known as an icon of Christchurch's rebuild. It is made of cardboard, local wood, and steel, with a polished concrete floor (under which runs a heat piping system) and a polycarbonate roof. It is built to comfortably exceed the country's building code stipulations on earthquake proofing, "making it very safe". Designed to last for at least 50 years, it's planned that the 'Cardboard Cathedral' will eventually be renamed the parish church of St John in Latimer Square once the city's permanent cathedral is built again in Cathedral Square. 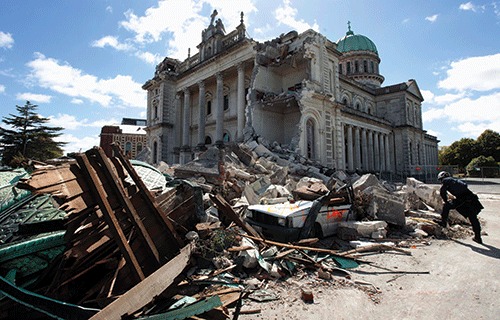 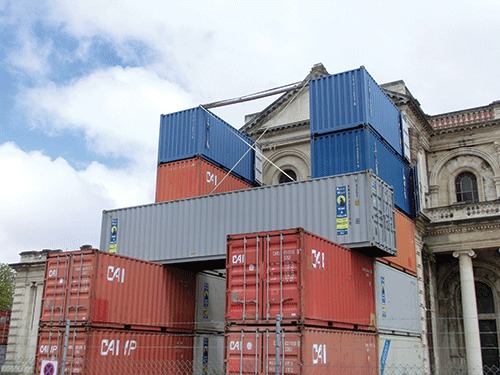 Due to what some thought a slow response to the disaster, many businesses started to locate themselves in the suburbs. "A lot of people have located there and won't come back," says Dawe of Opus. "It was a no-win situation; the companies couldn't afford to wait and the government couldn't make decisions. The central business district was in limbo while they came up with another central city plan."

A new IT hub - the Enterprise Precinct and Innovation Campus (Epic) was set up in the centre of the city to house 17 companies displaced by the earthquake.

Tragically, the earthquake exposed some real design and engineering problems with some buildings in the city. The Canterbury Television (CTV) building showed this most starkly; it collapsed within minutes, killing 115 people inside. Some died from the building rubble, others from the fire that started shortly afterwards. A government inquiry found that the building should not even have been issued a permit as it failed to meet the building code in force at  the time. The inquiry concluded that there were inadequacies in the construction of the building and problems with its design. The site is now being considered as a memorial for earthquake victims.

All these stories have prompted academics, policy makers, planners, designers and architects to think hard about how the city should be rebuilt. A Christchurch Central Recovery Plan for the city is also being enacted.

Hardie says: "Obviously an enormous amount of work has been done on foundation design (in the city), especially for multi-storey buildings, raft foundations and base isolation. All these things are routinely being used now in Christchurch to stop ground from moving around."

While longer-term projects have been mulled over, the city council and community organisations are working to temporarily activate vacant sites within Christchurch through a variety of creative projects. One such example is Gap Filler, which was actually set up in response to the 2010 quakes. Coralie Winn, co-founder and director of Gap Filler, explains: "When we began, it was about tapping into this sense among my peers that we didn't want to rush the rebuilding of Christchurch. We wanted it to be thought through properly, and temporary use of some of these sites could buy time. We were concerned that there would be this haste to rebuild and we'd end up with a lot of crappy architecture; fast-forward 30 years, and a city with poor design and poor architecture is not one that people want to live in."

Gap Filler has been responsible for many temporary facilities within the city. Many have been amenity-based projects such as a dance floor on the corner of Gloucester and Columbo Streets.

Winn says: "We lost a lot of dance studios and dance space in the earthquake so we created a dance floor with coin-operated lighting and sound It was an experiment to see as to how people would use public space and it has been really well used and a success."

An outdoor cinema powered by bicycles was also created, as was a 'Pallet Pavilion' - "a venue made from 3,000 pallets, a 20 by 25-metre structure with no roof, built by 250 volunteers taking six weeks". Winn says: "It was here for two summers and used as a venue for events and music."

After the earthquake, the use of shipping containers came to be seen in Christchurch as a new form of 'architectural device'. The ubiquitous containers are being deployed in a number of ways, working as walls to stop rock falls; as small and temporary storage and accommodation; as a temporary inner city shopping district; as venues for arts and community events; and as bracing for damaged buildings. It's going to be some years before the last container is driven away from Christchurch, its departure symbolising the end of a major rebuilding project - and a new awareness of FM borne out of a major catastrophe. 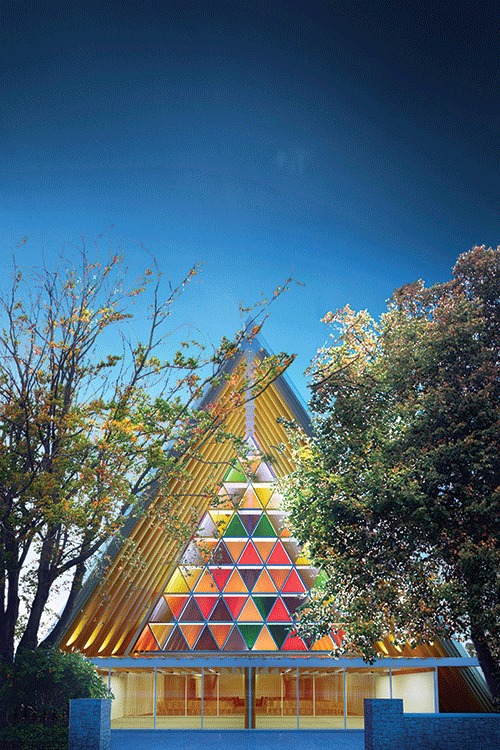