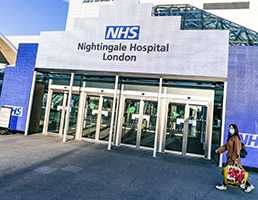 New NHS Nightingale hospitals will be opened in Sunderland and Exeter to provide extra beds for patients with coronavirus symptoms should they be needed in the weeks ahead.

Six days after announcing the development of NHS Nightingale hospitals in Bristol and Harrogate, NHS chief executive Sir Simon Stevens has confirmed the additional sites in Devon and Tyne and Wear.

In common with the five other Nightingale sites, converting the facilities – at the Centre of Excellence for Sustainable Advanced Manufacturing in Washington, and the Westpoint Centre in Exeter – will be a joint project between local NHS organisations, armed forces personnel and contractors.

This brings the total of confirmed NHS Nightingale hospitals to seven in a matter of weeks.

The Exeter and Sunderland sites are expected to be operational by the end of April or early May and will add up to 700 beds to be used by local services.

This extra capacity is on top of the 33,000 additional beds freed up across NHS hospitals – the equivalent of building 50 district general hospitals – and up to 8,000 beds put at the NHS’s disposal through an unprecedented deal with the private sector.

These measures mean that capacity still exists in hospitals to care for patients with coronavirus, as well as other patients who may need urgent and emergency treatment. The Nightingales will stand ready if local services need them beyond that.

The latest announcement comes after the first patients were admitted to NHS Nightingale Hospital London, which was operational less than two weeks after its conception.

Sir Simon said: “These hospitals will provide back-up and support for NHS hospitals across the South West and the North East, should it be needed.

“Our local health service staff have rightly recommended that we go ahead with these additional facilities. But our ambition as a country has to be to continue to stay at home to cut infections and save lives – so that the need to actually use these Nightingale hospitals is as limited as possible.”

The seven confirmed NHS Nightingale hospitals will be integrated with and support existing NHS Hospitals in areas across the length and breadth of England.

The Nightingales are part of a nationwide effort to respond to the greatest global health emergency in more than a century.

All Nightingales will draw on existing NHS staff, as well as the thousands of returning staff and training clinicians who have already begun to swell their ranks.