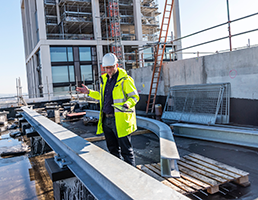 The Building Engineering Services Association (BESA) has warned that there could be another surge in mental health problems across the construction and building engineering sectors as more sites and buildings reopen.

It said Mental Health Awareness Week [18-24 May] was an opportunity for firms to assess the mental health and wellbeing of all employees to avoid “a ticking time-bomb of cases”.

Many operatives, says the association, are nervous about their safety on site and in buildings that may have been locked down for weeks.

A YouGov poll for the Chartered Institute of Personnel and Development (CIPD) found that 44 per cent of UK workers were feeling anxious about the prospect of going back to work because of the health risks posed by Covid-19 and 31 per cent are anxious about commuting – a figure that jumps to 52 per cent in London.

This also follows a CBI webinar that revealed that for every person who has died during the Covid-19 pandemic, six more were suffering intense grief and had not been able to grieve properly because of social distancing measures.

BESA chief executive David Frise said: “We have all been affected during this traumatic time... These sobering statistics are why it is important that this week we recognise that the pandemic is not just a health and economic crisis, but also a human one.

“Everybody’s lives have been turned upside down. We know in normal times that mental health issues affect one in four adults and suicide is the leading cause of death of males under 50. That puts our heavily male dominated industry particularly at risk.”

Between 2011 and 2015, more than 1,400 construction workers died by suicide and research from the Chartered Institute of Building (CIOB) suggests almost a quarter of all people employed in the industry have considered taking their own lives at some point. Also, 97 per cent of respondents to a recent CIOB survey of 2,000 construction workers cited experiencing some level of work-related stress.

Earlier in the lockdown, 41 per cent of respondents to a poll of carried out by BESA said their mental health was worse than normal as a result of the Covid-19 restrictions – including 5 per cent who said it was far worse.

Emily Pearson, managing director of the mental health in the workplace organisation Our Minds Work, said: “We need to treat mental health with the same seriousness as physical health.”

Speaking during a BESA webinar, she said that mental health “can kill,” and that action should be taken “if someone is having significant problems – just as you would if they had broken their leg”.

BESA also called for more attention to be paid to the impact of stress on business owners. It carried out an industry survey last year with the ECA, which found that nine out of 10 across construction were suffering a range of mental health issues because of payment difficulties and other business pressures.

“Employers in our sector were already severely strained before the pandemic,” said Frise. “It is lonely at the top. Running a business, especially a small business, can be a really stressful experience.”