Poll shows 70% of financial services workers like working from home 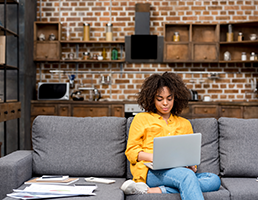 Almost three-quarters (70 per cent) of employees working in financial services rate their working from home experience as positive, according to a survey from Deloitte.

The Future of the City survey sought to understand how financial services employees – including those in banking, investment management and insurance – have adapted to working from home since the country was brought into lockdown following the outbreak of Covid-19.

It found that only one in 10 (10 per cent) offered a negative experience.

When asked what makes the experience positive, more than three-quarters (76 per cent) gave not having to commute as the top reason.

Other reasons were having more flexibility (43 per cent), being able to spend more time with the family (39 per cent) and having more time to exercise (28 per cent).

Employee wellbeing has also taken a positive turn, with more than a third (36 per cent) stating their wellbeing has improved during lockdown, against just under a quarter (24 per cent) that said it has worsened.

Of those who rate the experience as negative, over half (51 per cent) suggested that this was because they enjoyed fewer in-person interactions, followed by the challenges of maintaining a work-life balance (41 per cent).

Additionally, more than three-quarters (76 per cent) of respondents feel that they are as productive, or more so, working from home during the lockdown. This is mainly because they spend less time commuting to and from work (72 per cent), followed by fewer distractions (54 per cent) and a quieter working environment (52 per cent).

Margaret Doyle, financial services partner at Deloitte said: “Against the backdrop of the Covid-19 pandemic, the lockdown and all the challenges of home working – from health and financial anxieties to childcare – it is perhaps surprising that financial services employees are finding remote working so positive.

“But given ways of working are likely to be constrained for a while, this is good news. Longer-term, this forced homeworking experiment offers the industry a chance to reflect on its ways of working.”

Although more than half (55 per cent) of the respondents expect their employer to reopen offices by September, working patterns are set to change.

The survey reveals that the portion of financial services employees who expect to work from home at least once a week after lockdown ends almost doubled from 41 per cent to 77 per cent.

Meanwhile, the proportion of those who expect to work from home more than two days a week has jumped from 12 per cent to 43 per cent.

With increased expectations to work from home, employees shared thoughts on what would improve their experience. Almost half of those surveyed (44 per cent) said wellbeing tools – such as reminders to take breaks – would help.

There is also a disparity in remote working tools available to employees, with fewer than half (45 per cent) having and using online video applications, just over a third (35 per cent) using wellbeing tools and under than a third (30 per cent) receiving training on how to use new technology from home.

Richard Hammell, UK financial services leader at Deloitte, said: “Even with the extensive use of advanced technology and offshore operations, the activities of the City have centred on direct, in-person working patterns. That model was changing before the lockdown but is now irresistible. The specific in-person aspects of office life most valued by our respondents will never disappear. However, the City will need to use this experience to reconsider the employee proposition that underpins the financial services industries. Far from being the death of the City, it’s a chance to shape it for the future.”