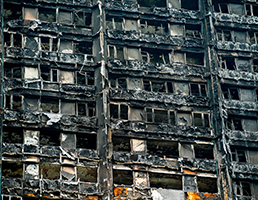 The Construction Industry Council (CIC) says the government should extend the ban on the use of combustible materials on a wider range of buildings than is currently proposed.

It wants the ban to include care homes, halls of residence and potentially schools.

The CIC’s recommendations are in response to a government consultation first published in January, which proposes changing the building regulations to ban the use of combustible materials in and on external walls and in specified attachments to the external walls on buildings such as hotels, hostels and boarding houses of 11 metres or higher.

The government consultation seeks views on the ban of the use of combustible materials in and on external walls of buildings, including building types covered, height threshold, list of exemptions, attachments such as blinds, shutters and awnings.

The CIC supports these changes but recommends that they go further “to include residential buildings such as halls of residence and residential colleges”.

It adds: “There is also a case to extend the ban to buildings where there is a reduced capacity for escape such as care homes and hospitals and where young people assemble, (e.g. schools and nurseries) and public assembly buildings (e.g. theatres, libraries and community centres).”

The CIC also urges the government to consider reducing the 11m height for buildings where vulnerable people sleep, including care homes.

It states: “A risk-based approach should be considered, rather than relying only on trigger heights as the key criteria for making these decisions. For example, Rosepark Care Home in Hertfordshire was only two storeys yet the 2017 fire there resulted in 14 deaths. We would welcome further research into the height aspect.”

Graham Watts, chief executive of the CIC, said: “Our members are strongly of the view that government proposals, while extremely welcome, do not go far enough and we need to do more to protect the safety of the most vulnerable in society. It is for these reasons that we are urging that the ban on the use of combustible materials be extended to far wider use classes.”

The government is proposing the outright ban on metal composite panels with a polyethylene core (including the type used on the Grenfell Tower), which the CIC also supports.

The CIC has highlighted a number of areas where it wishes to see more research and investigation to help determine the height at which combustible buildings should face an outright ban.

It also cautions against taking actions that would prohibit the use of timber as structural material. “Timber structures are used successfully in buildings in other countries to heights well above 11m and the difference between fire risk in timber cladding and fire risk in timber structures should be fully understood before taking steps that may have the unintended consequence of prohibiting sustainable timber.”

A final area of concern to the CIC is the lack of focus on other aspects of the Building Safety Programme outside of fire and structural concerns, and it points to the significant potential problem of overheating in buildings, which it says is being overlooked.

It says: “Overheating is already a problem – it is hard to quantify because cases are often being settled confidentially out of court. Further published, peer reviewed evidence (from UCL) suggests a growing problem, leading to several thousand excess deaths per year by 2050.

“The connection of the issue of overheating to this consultation on combustible materials is that it does not seem to acknowledge that overheating is a problem, or that external shading is one of the measures to mitigate it. There needs to be a commitment to some specific research into the influence of external shading devices on the external spread of fire.”