The final piece of the data puzzle 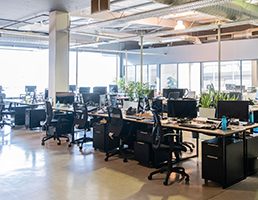 In a post-pandemic workplace, aiming for 50 per cent occupancy levels is a realistic goal, listeners of a workplace webinar heard last week.

In the Worktech webinar, Returning to the New Normal: The Impact on the Workforce, The Workplace and Real Estate, Paul Statham, CEO of Condeco, said that from many years of research and gathering data, his organisation has seen businesses underuse their workspaces.

Traditionally, buildings have been designed for the 80 per cent – those that want to come to the office for some of the time, usually on a Monday. However, after the “Monday spike”, usually from Tuesday lunchtime onwards, occupancy drops to 30-60 per cent. Statham argued that 50 per cent occupancy levels are “very achievable” for companies that can manage the Monday spike through flexible and home-based working.

The real estate cost savings of reduced occupancy levels are enticing on their own. But the enforced shift to working-from-home practices has also presented workplace and facilities managers with an important and previously missing data input.

There has been plenty of CRE data available, Statham said, resulting in many accepting the 50 per cent figure as “universal across most of the real estate but the problem is they don't know which 50 per cent of the employees want to come in at which time and into which building and where they want to sit”.

In response to the pandemic, employees now have the opportunity to input their choice to work from home or from a particular building or location. “That’s data that we’ve never ever had,” Statham said. “Before we’ve had when they turned up and sat down or not turned up, but we’ve now got their actual desire at the point of making that choice by capturing that data.

Data of this type will help reduce workplace density that arises from organisations “trying to squeeze those busy Monday mornings into a smaller piece of real estate without making major investment… It's not all about saving money, you can be producing that utopian workspace that really does do what people want it to do and when they want it to do it. And all we’re now asking people to do is tell us when they’re going to come in and what they need”, said Statham.

Trillions of lines of data about employee behaviour will lead to a “computer-generated” workplace within the next three years, Statham added.

Webinar host, chair of the Worktech Academy and CEO of UnGroup, noted this missing puzzle piece would transform workplaces from dumb buildings into “real-time real estate that enables a building to be load balanced”, calling it a “remarkable transition for the profession”.

“Using the VC technologies, let's say Microsoft Teams and others out there, our teams have actually gotten closer and more productive and bonded more by having that visual connection more so than pre-Covid, where people were really just on the phone, internally and with clients. So it’s really been an amazing shift because of the pandemic,” Cerria explained.

Statham said: “I think the level of trust has gone up as an employer.”

Initially companies might have worried about whether employees could be trusted to perform without any physical or visual controls. But people have shown up each day and been productive.

“I know myself, as an employer, will not forget that in a hurry… The empathy between the employer and the employee will be a bond I hope will never break.”

However, Davis noted that many – employees and business leaders – want to return to the workplace. “From a business perspective, we bring people together for positive conflict — so that's co-creation, spontaneous discussion, collaboration, idea generation. That's what the business wants to get from bringing people together. The employees, of course, want social interaction.”