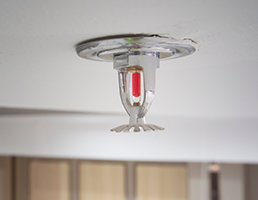 On 26 May, the government released the inaugural phase of its Fire Safety Approved Document Work Plan – the implementation plan based on the Hackitt Report recommendations to create a new building safety regulatory framework.

As part of this, the government announced updates to the building regulations in Approved Document B, whereby the current trigger height for sprinklers in new residential flats would be replaced from 30 metres in height (typically 10 floors) to only 11 metres (typically four floors).

This change means that any new flat developments with a floor at the new threshold would have to be fitted with a sprinkler or an alternative fire suppression system.

The requirement, which comes into effect on 26th November this year, would apply only to projects lodged before this time and that have not started ahead of the official cut-off date of 29 January 2021.

The government also recently prescribed the new requirement for wayfinding signage in flat developments in stairs and lobbies to assist firefighting operations. More regulatory reforms are expected to follow later in the year – including consideration of evacuation alert systems and possibly the introduction of a new 11 metres height requirement for firefighting shafts, as opposed to the current 18 metres.

Andy Lowe, technical and training director for Bureau Veritas Building Control, said: “Following an ongoing consultation period, we are in full support of the government’s decision to considerably lower the threshold height for the provision of sprinklers in new flat complexes, while also including the provision of storey identification signage in staircases to assist wayfinding for firefighters.

“While these may seem relatively simple changes, they are incredibly important ones which will go a long way in helping to ensure that residents are safer in their homes and that more adequate preventative measures are in place should an incident occur.”