Is this the end of open plan? 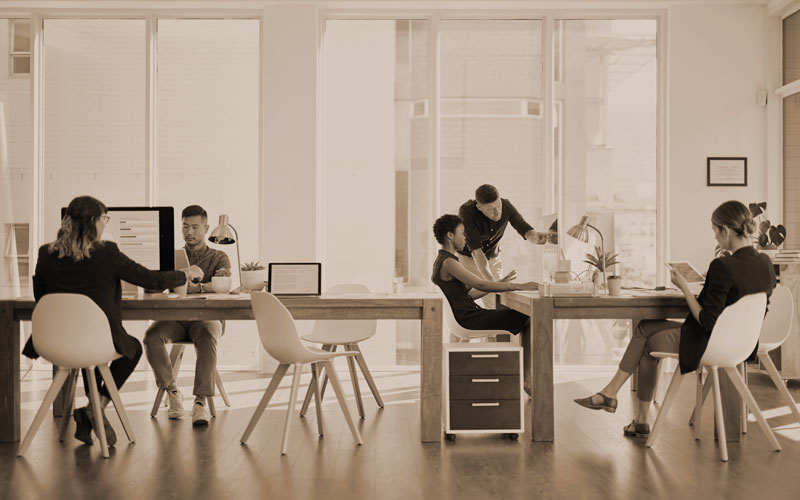 Does the pandemic spell the end of the open plan office? In short, no, despite the many headlines and social media pundits calling for its death. This moment in time, however, provides an opportunity to rethink the current layout to enable employees to work effectively, safely and in comfort. Bradford Keen reports.

The open plan office is here to stay. It just needs a little improvement.

“We will not move away from the open plan concept,” says Marie Cecile Puybaraud, global head of research at JLL. Instead, we will see “adaptation”. “Most of our clients are planning to return to the open plan office; they are not planning any major destructuring of the open plan office, but they're trying to think about the new working environment.”

The prevailing narrative is that the future office will chiefly be a space for collaboration, while employees’ focused tasks can be completed at home or elsewhere.

There’s a sense of vindication for Puybaraud who, back in 2014, published a report arguing that in the future, 70-80 per cent of the office will be dedicated to collaboration and face-to-face interaction spaces, noting a significant reduction in solo working areas.

“Honestly, when I published my report people thought I was an alien,” she says. On social media people accused her of being totally unrealistic. Now it seems this is a viable option that caters to the blended homeworking and office-based model. Part of the research involved contemplating and defining the personas of the modern workforce, now with increased flexibility and permission to work from anywhere.

Puybaraud is helping to develop a new global workforce persona and mobility profile to help organisations understand that what the office will look like depends on who chooses to occupy it. Will it be the agile employees persona seldom present on site or those anchored to a particular location? Could it be the flexible worker who mixes up their home and onsite work? Understanding who will be in the office shapes how it should be designed and how it should function.

Adjusting and adapting the office effectively is possible but Nigel Oseland, director of Workplace Unlimited, says: “We have to go back to the days before we became too cost-focused and start to think about how we can provide open plan spaces that support workers and their performance”.

Much of the criticism of open plan can be attributed to poor design, which Oseland describes as a “sea of desks – high-density desking at that – so very little space and people crammed in a bit like call centres or battery hens if you like”.

Nevertheless, there are many companies that have seen the faults associated with the worst cases of open plan. Andrew Mawson, founder of Advanced Workplace Associates, says these organisations are moving towards workplaces that enable activity-based working and support people to complete focused solo work or enable collaboration.

People should be able to “pick and mix” the way they work and where they work from, says Mawson. “Most companies faced with change – a refurbishment or relocation – are adjusting in this way. Very few, I think, are just building on a traditional open plan model.”

Thoughtfully designed open plan is still advantageous in many ways, not least because of the flexibility it affords. As Dan Pilling, consultant at TSK Group, says: “Many office layouts are conceived around a moment in time need, fixed headcounts, processes and economic conditions – flexibility to adapt to change isn’t often afforded by building walls.” Oseland says the coronavirus pandemic is an opportunity to rethink how we use office space: “Let's make it more humane, less dense and actually better for health and wellbeing.”

A better future office, says Monica Parker, founder of data analytics firm Hatch, is one that is “designed based on the evidence of the people who inhabit them; they should be well-thought-out and provisioned for the activities that need to get done there; and people should have maximum autonomy to use those spaces how and when they see fit”.

That sense of autonomy and freedom of movement and choice could go a long way in resolving the most common complaints of the open plan office, including temperature, air quality, acoustics and being disturbed. Simply “enabling people over time to plan their own activity” would help, says Pilling.

People are reportedly missing the interaction and in-person collaboration that a workplace can bring. This missing element, plus encouragement from the government and some employers to get employees back in the office needs to be tempered by the most pressing needs currently.

“We have our priorities completely botched if we’re trying to figure out how to keep people safe just so they can sit in the same room to stick some post-its on a whiteboard,” Parker says. More pressing than the open plan debate is the commute and the fear of being fired for not returning to the office.

“Trains, tubes, lifts, loos and general cleanliness are bigger concerns – regardless of open or cellular design,” Parker explains. “For many, the sensible thing would be to move to a more social and collaborative office environment with far fewer desk settings, but that should only be embraced when people can safely get to and occupy their office.”

Oseland feels similarly. Spacing people out, keeping occupancy levels at 50-60 per cent at any one time, and halving the number of seats in a meeting room, for instance, would reassure people and “probably better than you’re getting at the moment, on a train, pub, restaurant or down the street”.

A useful way to help build employees’ confidence in the safety of the workplace is through targeted interventions rather than “wholesale reinvention of the office landscape”, Pilling says. These interventions include addressing overpopulation, hygiene factors and adopting technologies that augment our work activities.

Despite calls to return to the office, there will likely be reduced occupancy for many months yet as employees continue to work from home. Mawson estimates that around 40 per cent of seating capacity will be filled in the short-term. (Oseland thinks 60 per cent is a realistic goal with many employees favouring two to three days in the office each week.)

“You certainly can’t upgrade a traditional model of working, you’ve got to move to a much more shared environment in one form or another. So you get people away from ownership. When we’ve come out the back end of this, occupiers will want to reshape the space they are using and they'll want to sublet the space they’re not using or consolidate.”

A move towards a workplace that accommodates more virtual work and favours a central activity-based workplace would yield great results for companies, Mawson believes the right technology will enable frictionless work, liberation of employees to work in all sorts of places and “you'll be able to recruit from all sorts of places that you never thought you could before”.

Puybaraud also advocates for technologies to be embedded into the new way of working – at the office, in the home and elsewhere. “That’s probably the first priority, well before thinking about the concept of the touchless office,” she adds, despite touchless tech being high on the agenda currently. Its implementation is inhibited by high costs.

“The priority seems to be around how to create collaboration of quality for people who are physically within an office environment and others who are remote – and to sustain that within the existing open plan office.” 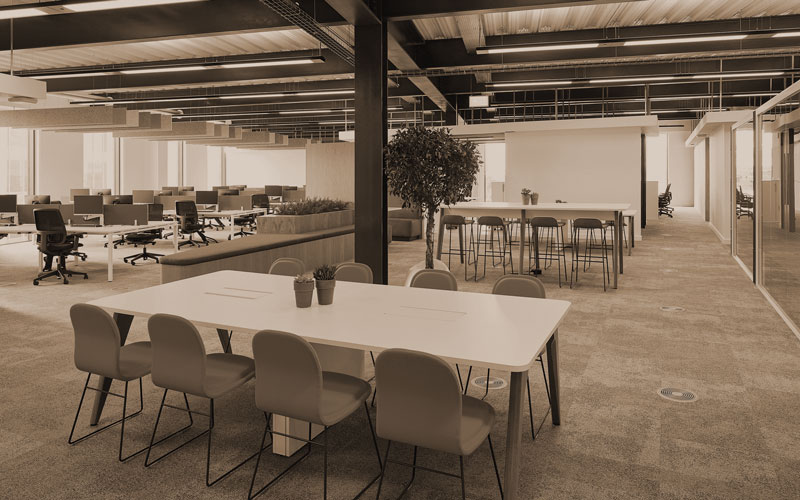 Physical distancing must be carried out in offices to reduce the spread of the virus and this will require rethinking the layout. However, it’s worth contemplating this change with a short, mid and long-term view.

Interim responses have included a lot of office DIY, Puybaraud says. Partitions between desks or work areas are interim solutions that are not intended to persist post-pandemic. Oseland agrees, warning against going “over the top with the screening” when adequate spacing of employees could be used to better effect.

Looking beyond the interim, however, is challenging as it is so hard to make any predictions about the future.

“Clearly the move towards one cubicle for everybody, which we spent decades to move away from, is not yet back on the agenda,” Puybaraud explains. Instead, clients are keen for  solutions that keep the employees safe by modifying the working environment but not “damaging it”.

She adds that clients are thinking about the long-term, potentially permanent solutions but nothing as dramatic as “mass structural changes”. Instead, the conversation is around “de-densification of space” and new protocols that will help navigate through this interim period and beyond.

Any permanent design changes as a reaction to the pandemic would be “bonkers”, Parker argues. “People rushing to make permanent changes aren’t doing so because it actually makes sense to do it – we still have offices with desk phones on them when we have had soft phones and mobile devices for almost 20 years – but rather because people have to be seen to be doing something. It’s pure action bias at work, not sensible design strategy.”

Parker warns that “pandemic design is a red-herring” or “Rorschach test”. “If the company wanted open plan pre-pandemic because it’s cost-efficient or allowed for better communication, then those drivers will seem even more important today. If the company was looking for an excuse to stay cellular, then they will magically find that excuse now.”

However, Parker sees the pandemic as a chance to change direction. “My hope is that any permanent effects are driven by continued mass-adoption of remote working that in turn challenges our assumptions about the purpose of an office.”