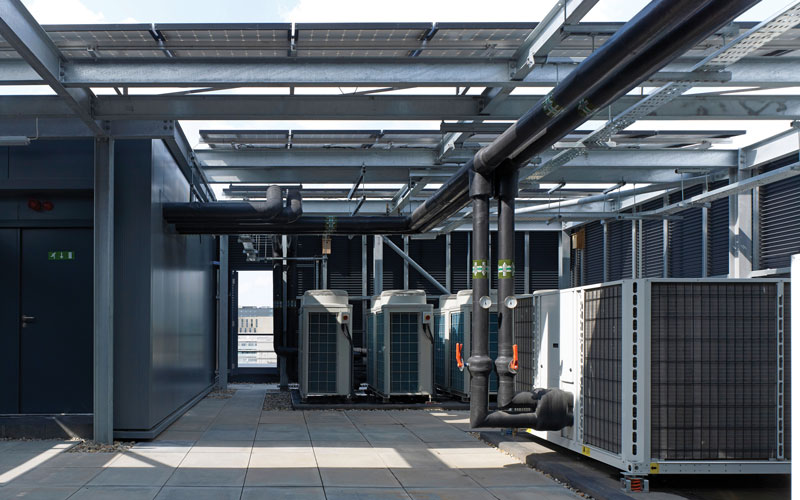 Heat pumps will play a critical role in tackling emissions from London’s buildings and delivering the mayor’s 2030 net-zero ambitions, said a report by the Carbon Trust last month.

The study, Heat Pump Retrofit in London, commissioned by the Mayor of London, includes analysis of the potential to retrofit heat pumps across a range of existing buildings in London and recommends a plan for scaling up energy efficiency and heat pump retrofit across the capital.

Decarbonising heat is London’s biggest challenge to achieving net-zero emissions. Natural gas,  used mainly for heating buildings and water, accounts for 37 per cent of greenhouse gas emissions in the capital. To achieve the mayor’s net-zero target by 2030, London will need to make a rapid transition from gas to low-carbon heat solutions, most of which will be retrofitted with at least 80 per cent of current buildings expected to still be standing in 2050.

London will need to make a rapid transition from gas to low-carbon heat solutions, most of which will be retrofitted

Heat pump systems have the potential to deliver immediate carbon emission savings of 60-70 per cent compared with conventional electric heating and 55-65 per cent when compared with an efficient gas boiler.

As the grid decarbonises further in coming decades these carbon savings are expected to increase to 90-100 per cent of carbon emissions by 2050.

Additionally, a prerequisite for the roll-out of heat pumps in many buildings will be improved thermal energy efficiency, which is likely to require significant investment from central government, alongside investment and coordination with local authorities and the private sector. Retrofitting energy-efficiency measures, combined with heat pumps, provides multiple benefits, including reducing energy bills, and enabling the heat pump to operate more efficiently.

According to Will Rivers, manager at the Carbon Trust,  it is a similar picture nationally. He told Facilitate: “Broadly speaking, the national picture is similar to the London picture in lots of ways and many of the findings will be relevant nationwide. Our action plan for delivering heat pump retrofit at scale is certainly applicable at a national scale. Heat pump retrofit installations need to be scaled up rapidly across the UK in order to deliver net-zero carbon targets. London currently has particularly low numbers of heat pump installations , with the lowest numbers of RHI heat pumps installations of any region in the UK.”

He added: “A key overarching finding from the research is that heat pumps are a highly varied and versatile form of technology that, with appropriate design, installation and commissioning, can work well in all building contexts – and therefore can work well in all regions.

“However, the profile of heat pump technologies is likely to differ between regions based on factors such as the age and energy efficiency of the building stock, local geology and the relative density of buildings – these will all influence the particular types of technology that are most suitable. For example, in London air source heat pumps are likely to be a key technology type, but probably less prevalent than in other regions due to the difficulties of retrofitting air source heat pumps in particularly dense urban environments such as large blocks of flats.”

Graeme Fox, head of technical at the Building Engineering Services Association (BESA), told Facilitate that to achieve the net-zero targets, action would need to be taken now and even if it was, he pointed out a number of challenges that had to be tackled for this to happen.

“The acual issues are multilayered,” he said. For a start, Fox says the most efficient type of pumps had to be fitted – known as the split type system. Fox says more engineers willing to fit pumps into domestic buildings were needed and fitted adequately – by someone qualified to fit it.

Fox said manufacturers were “quite comfortable that they can meet the demand of actually producing the units. The demand or the supply shortfall is going to come in on the labour side. In the installer base rather than the manufacturing of products”.

Fox added: “Then there’s the issue of servicing them and the repairs – that’s a lot of concern [if there is not enough labour].”

He also thinks there “needs to be more government action” and that “heat pumps need to be made available to homeowners”.

Although commercial buildings also need to have heat pumps fitted, it is a “more mature market” and already being done in retail and office buildings as a matter of course, according to Fox.

He said: “We remain committed to investing in this technology for the long term as part of meeting our target for net zero carbon emissions by 2050.

“Homeowners will be able to get heat pumps fitted with our £2 billion Green Homes Grant, on top of the £2.8 billion we are investing in heat pumps and similar technologies through the Renewable Heat Incentive.”

The government also said that as of March 2020, there were approximately 60,000 heat pump installations in Great Britain supported through the Renewable Heat Incentive Scheme.