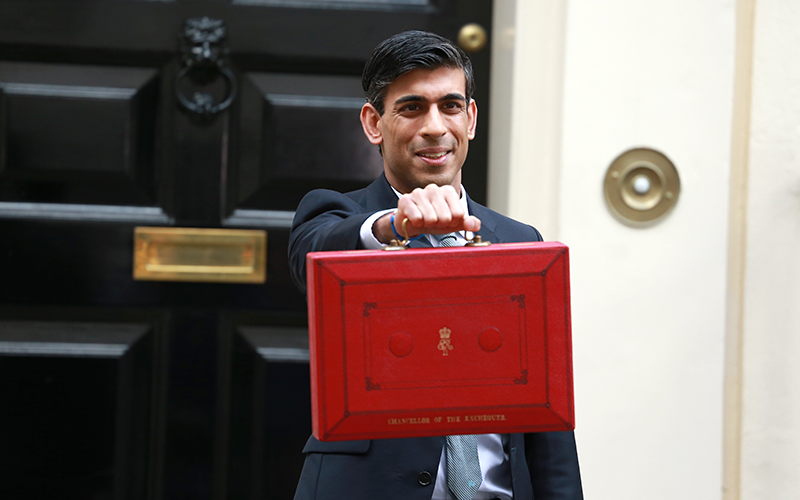 Chancellor Rishi Sunak has announced support for businesses in retail and hospitality and funding for apprenticeships in the 2021 Budget.

Delivering the Budget to Parliament today, Sunak, said eligible retail, hospitality and leisure businesses will pay no business rates for 3 months, with up to 66 per cent relief for the rest of the year worth over £6 billion in 2021-22.

The government also extended the temporarily reduced VAT rate for hospitality and tourism.

There will be payments to firms to encourage them to take on apprentices, said Sunak. Payments that are incentives for firms to hire apprentices will be doubled, to £3,000 and there will be £126m to help people offer trainees shifts to apprentices.

The Chancellor said the Job Retention Scheme would also be extended until September.

He said the current economic forecasts show the economic response is working. The Office for Budget Responsibility (OBR) is now forecasting a “swifter and more sustained recovery” than it was expecting in November.

He said the OBR now expect the economy to recover to its pre-Covid level by the middle of next year - six months earlier than previously expected.

Rain Newton-Smith, CBI chief economist, said: “Quite simply, extending the [Job Retention] scheme will keep millions more in work and give businesses the chance to catch their breath as we carefully exit lockdown.

“The furlough scheme has been a stand-out success throughout the crisis. It’s common sense to keep the scheme going while business resilience remains so fragile for some months yet.

“As we make progress into the summer, it’s right that businesses start contributing to be part of the scheme. Meanwhile, it’s great to see more support for the newly self-employed, who have missed out over the last year.”

Atul Bhakta, CEO of One World Express, said: “The chancellor has lived up to his promise by prioritising emergency support for UK businesses.

“Ongoing pressures caused by Covid-19, not to mention the additional challenges posed by Brexit, have meant that as many as 25 per cent of British companies fear they will not survive until the end of the year, according to a recent study by One World Express. So, the extension to the furlough scheme, coupled reinforced with support for the self-employed and prolonged VAT cuts, offers some welcome relief.

“That said, the government still has scope to go further. Realistically, businesses will not bounce back to their pre-Covid operational capacity for some months or even years. So, the chancellor must look to develop a more long-term recovery plan, as opposed to relying on further extensions to temporary schemes to re-stimulate growth. Otherwise, the UK’s economic recovery could stagnate.”