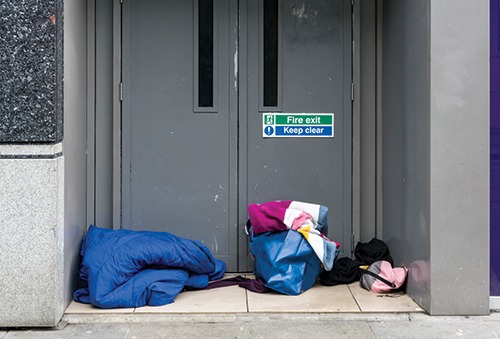 Homelessness is a growing social issue and security personnel need to be equipped to manage it, says Duaine Taylor.

For security officers working at city centre sites, commercial premises or retail spaces, coming into contact with the homeless is a daily occurrence. Having the right skill sets, training and confidence to approach people who appear vulnerable is critical.

Any on-site policy should centre on positive action, not only to maintain site security but also to safeguard vulnerable people visiting it.

Don't try to move people on, simply sending the problem to a neighbouring property. Instead, check on the person's wellbeing and direct them to professional help such as shelters, support groups or rehabilitation centres.

2 Draw on other skills

Security personnel should have a solid foundation of skills learned from Security Industry Authority training to bring into play. Their customer service training, for example, prepares them to be polite and professional, and treat anyone on site as a visitor, regardless of status, and fulfil their duty of care if first aid is required.

Training in conflict management will also have taught officers to keep their body shape assertive rather than aggressive.

But dealing with a homeless person requires a balance of skills: a security officer needs to be sensitive to the person's circumstances but must also protect himself and other people around them. In this case, more intensive training should be considered.

Set up toolbox training for site managers to help officers take the right approach. For example, officers should be trained to make a full assessment of the risk of harm before making any kind of approach to someone who appears to be homeless - or indeed anyone who is suffering from a mental health issue or under the influence of drugs or alcohol.

Observation is key, along with a dynamic check of the environment.

Officers should wear gloves and keep them on even if offered a hand to shake after a successful conclusion.

Proper training will emphasise that any situation involving someone who is homeless or vulnerable should be carried out with respect for the individual and in a manner that preserves the person's dignity.

It starts with positive engagement and building a rapport and finding ways to help the person, such as using the security team's knowledge of the area to suggest places that can offer help or refuge.

Even when a positive outcome is achieved, and the person agrees to move from the site, it is important to maintain that respect.

Officers are trained not to take actions that could be misinterpreted as an effort to move the person on more speedily. So, while it might be a natural reflex to help pick up personal possessions or sleeping bags; officers should be reminded that this can be used against them should the person feel under pressure, and it can also present a risk should anything harmful be concealed within the belongings.

The overall approach of the security team should be to notice vulnerable people. Teams should be building good relationships with local police and the local authority, using non-emergency numbers to provide regular reports/updates as required.

Site proximity means that a problem on one site is invariably a problem on the site next door, so they should also share information with other security teams. This could mean passing on notes about a vulnerable person who has been approached or something spotted on CCTV that might be headed in a neighbour's direction.

This article appeared in our March 2020 issue of Facilitate Magazine.
Click here to view this issue
Filed in
Know How
Also filed in
Content
Know How
Explainers
Topics

London (Greater)
Up to £47,276 per annum plus excellent benefits
Reference
59097
END_OF_DOCUMENT_TOKEN_TO_BE_REPLACED