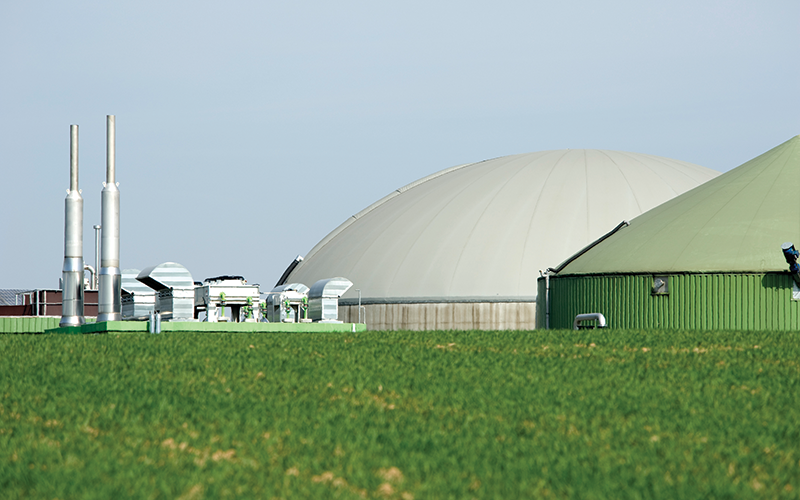 Anaerobic digestion is the secret green energy source that could be powering your business, says Valpy Fitzgerald

Last summer, Bristol Community Transport opened a biomethane gas filling station to fuel a fleet of 22 biogas-powered city buses and an additional 77 vehicles to be introduced in April, resulting in 80 per cent reduction in greenhouses and 95 per cent less nitrogen oxide.

The biomethane gas is produced through anaerobic digestion (AD), which already powers many UK businesses. Opus Energy has enough AD plants to produce 170 gigawatt hours a year – equivalent to keeping the lights on in more than 54,000 houses a year.

What is anaerobic digestion?

AD is the breakdown of organic materials into gases, with water as a by-product. The organic matter, which can include manure, slurry, food waste or crops, is broken down by oxygen-intolerant microorganisms in an airtight container.

This process releases biogas – a mix of methane and carbon dioxide – that can then be used as fuel for grid resources such as heat and electricity generation or as biofuels for transport. Once all the biomass has been processed, the leftovers in the tank can be dried for fertiliser owing to the high concentration of nitrogen and potassium.

Who can use an anaerobic digester?

ADs have been used in sewage treatment plants for many years, as the vast quantities of waste water and sewage processed on-site provide a constant supply of organic matter. Bristol sewerage works, for example, treats 657,000 cubic metres of sludge and 35,000 tonnes of food waste from local homes, food manufacturers and supermarkets each year, all of which can produce as much as 34,000m3 of biomethane a day in the process.

Those using microscale ADs, such as farmers, can produce their own renewable fuel and biofertiliser, and improve waste management on site. Excess energy can also be sold back to the grid. Small-scale applications are getting popular, but the amount of organic material needed to feed the digester is a limiting factor.

The most vital step is finding a supportive partner to help you investigate your options – from technology viability to arranging a power purchase agreement (PPA). Suppliers will manage the process from start to finish, so do research to find out what could be best for your business.

Can ADs be used for commercial applications?

ADs aren’t yet suitable for commercial applications because of the waste material that remains at the end of the process. But that doesn’t stop them using AD to reduce gas-related carbon emissions.

For example, commercial businesses can offset their carbon emissions through certification schemes such as the Green Gas Certification Scheme (GGCS), which certifies producers of biomethane in the UK and tracks ‘green gas’ throughout the supply chain. All biomethane produced through AD that is injected into the National Grid is classified as green gas.

For every kilowatt equivalent of green gas injected into the grid, the producer is issued with a Renewable Gas Guarantee of Origin (RGGO). Energy suppliers can buy these certificates and offset them against a customer’s consumption. The money is used to develop biomethane production.

How does AD compare in efficiency to other renewable energies?

One of the big advantages of AD is that it offers a constant source of energy generation. To head to a zero-carbon future, the UK needs a balanced mix of renewable energy technologies to ensure power stability when the wind isn’t blowing and the sun isn’t out.

Just as city councils can use AD to improve air quality, businesses should be aware of AD’s potential to cut their carbon footprints. Given the government’s climate commitments, we can expect use of AD to increase rapidly in the coming years.

This article appeared in our August 2020 issue of Facilitate Magazine.
Click here to view this issue