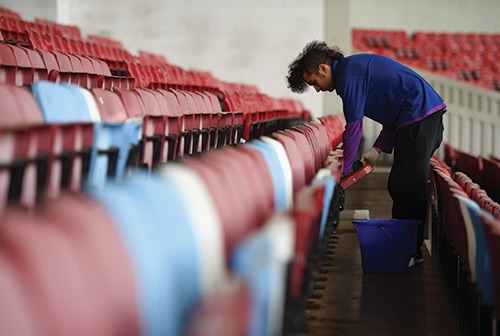 The FM industry has expressed concern at the government's changes to the immigration system, saying it could lead to a labour shortage in sectors such as cleaning.

The government unveiled the Australian-style points system as an opportunity to take "full control" of British borders and create "a high wage, high-skill, high productivity economy".

But the British Cleaning Council (BCC) has said it's "very worried and concerned" about the possible impact of the proposals. The industry body for the cleaning sector fears plans to restrict visas for lower-skilled, lower-paid overseas workers will cause serious labour shortages in the cleaning sector, which is worth £49.9 billion and employs 914,000 people.

BCC research released last year showed that cleaning sector workers tend to have lower levels of qualifications, with migrants making up 19 per cent of the workforce with an average pay at £8.42 per hour.

The research, which was conducted well before the immigration rule changes were proposed, predicted that 93,000 new cleaning jobs would be created by 2024.

BCC chair Paul Thrupp said: "The cleaning sector was expected to thrive over the next few years, creating thousands of jobs. Instead, these proposals would strangle our industry by cutting off easy access to the lower-skilled, lower-paid, overseas workers we rely on. With the lowest UK unemployment for years, there is no chance of UK-born workers being able to take up the slack and fill the vacancies. This has serious implications across the economy.

"Health and safety will suffer through lower hygiene standards, because cleaners have a vital role in all sectors, including healthcare and all industries such as chemicals and manufacturing. It will hit the environment, because of the role of our colleagues in street-cleaning, waste and recycling. Cleaning is also important to the success of many enterprises such as hotels and restaurants. Cleaning businesses could shrink or close because of this labour shortage. Because of the sheer size and the number of people the sector employs, this in turn, will also affect the UK economy and damage growth," Thrupp concluded.

Sofie Hooper, head of policy at the IWFM, echoed the concerns. "We wonder who will staff our reception areas, clean our offices and secure our airports, hospitals and schools. A fit-for-purpose system must be able to deliver the skills employers need with a balanced approach to immigration. Facilities management is one of several professions with a low barrier to entry and while we heed the need to develop homegrown skills, an absence of a route for low-skilled workers, outside agriculture, will undermine service provision - including in those organisations providing public services."

But at last month's Workplace Futures conference (see pages 14 to 15), others in the industry welcomed the proposals, saying they would go some way in paying workers usually exploited by the industry a much more respectable wage.

Martin Pickard, an FM consultant hosting the event, said: "New immigration rules means you can no longer exploit foreign labour. We are going to have to make sure we are paying people the right wage for the right job."

Kath Fontana, managing director, public sector, critical infrastructure and capital projects at Mitie and president elect at RICS, said: "I personally see this as a huge opportunity for action." She said people should be "rewarded for their skills and talents".

London (Greater)
Up to £47,276 per annum plus excellent benefits
Reference
59097
END_OF_DOCUMENT_TOKEN_TO_BE_REPLACED