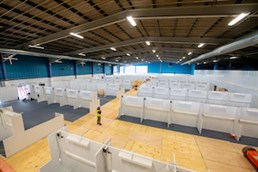 VINCI Construction UK is a part of a group that is creating temporary Rainbow Hospitals at Deeside Leisure Centre and Bangor University – the equivalent of the Nightingale hospitals that have opened in parts of England.

Renamed Ysbyty Enfys Glannau Dyfrdwy (Rainbow Hospital Deeside) and Ysbyty Enfys Bangor (Rainbow Hospital Bangor), they will form two out of three sites that have been handed over to Betsi Cadwaladr University Health Board (BCUHB) to provide a combined 1,000 additional beds to help to meet increased demand over the coming weeks and months.

BCUHB is working in partnership with local authorities and military planners to rapidly establish the hospitals so they can begin providing care for patients by the end of April.

VINCI Construction is delivering the work as part of Integrated Health Projects (IHP) under the Welsh Health Framework and work began last weekend to demolish the 16,000 square feet indoor wooden skate park at Deeside Leisure Centre, which will be converted into the main ward space for the hospital.

John Roberts, regional managing director of VINCI Construction, said:  “This is the latest in a number of projects where our teams have led from the front to help support the NHS at this time of national emergency. It’s a privilege to play a part and it has been amazing to see how everyone has collaborated in just a matter of days to turn this hospital around.”

VINCI Construction has teams working across six hospitals in Wales and the north-west of England either to establish field hospitals from scratch, to refurbish existing units or create critical care wards ahead of schedule to provide the NHS with extra capacity.

IHP, the joint venture between VINCI Construction and Sir Robert McAlpine, is also leading on the development of the Nightingale field hospital in Manchester.