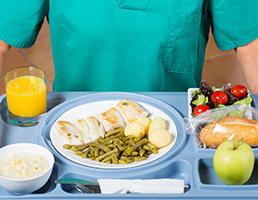 Caterer BaxterStorey has united with industry partners and others working in hospitality to create and serve thousands of meals to frontline NHS staff across 55 hospitals.

FeedNHS, Mealforce, and Feed our Frontline have come together with BaxterStorey to coordinate their campaigns to feed critical care teams across the NHS.

From today (20th April), the coalition of caterers will be helping to feed NHS teams across the nation – first in Aberdeen, Glasgow and Edinburgh, with ongoing discussions to expand to Manchester, Birmingham, Brighton and Cardiff.

Meals are being served by LEON, BaxterStorey and by Mealforce, a group of businesses working with the charity NHS Helpforce. As a result, the coalition now has the scale to serve more than a million meals.

A number of high street brands including Dishoom, Wasabi, Tortilla, Franco Manca, Farmer J and Wrap it Up are working alongside LEON.

The coalition has estimated that it will be able to sustain 25,000 people a day for the next six weeks, but more money is required to increase the number of meals served by an additional 15,000 and to extend provision beyond six weeks.

The coalition of leaders from the restaurant industry and from finance have been in constant contact to coordinate their efforts, and to match the meals available with the hospitals in the greatest and most immediate need. By coming together, the coalition has been able to pool its funding, coordinate engagement with the NHS trusts, and share lessons on how best to work with and support the hospitals.

In addition to the money raised by FeedNHS, through the generous support of 24,000 members of the public, a number of individuals have contributed significant sums to boost the funds available.

Carol Haraldsson, head of charitable giving at UCLH NHS Trust Foundation, said: “Many doctors and nurses in critical care units do not have time to leave wards to get a good meal. Support from the FeedNHS coalition and funding has made a massive difference to our frontline team at UCLH, helping to get meals to NHS staff that need them most.”

Alastair Storey from BaxterStorey said: “By working together with LEON, Mealforce and the high street brands, we can expand the work of FeedNHS to support additional hospitals in Scotland, Birmingham, Manchester and Cardiff.”

People can donate to FeedNHS by visiting www.feednhs.com