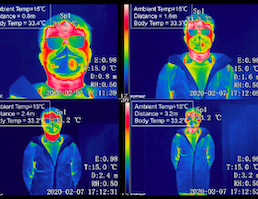 Corps Security has launched a thermal imaging tool to support business as they plan the return to work following the lockdown necessitated by Covid-19.

The AI body temperature measurement tool, which comes in handheld, fixed and tripod-mounted options, scans people’s temperatures as they enter buildings, allowing organisations to identify anyone with a high temperature.

Installed within 10 minutes, the cameras can simultaneously scan up to 16 faces – up to 3,600 an hour – making them suitable for corporate offices, arts venues, manufacturing facilities, retail outlets and other high footfall locations. The millisecond response means people have no reason to adapt their behaviour as they enter a facility, so business efficiency is unaffected.

Corps Security has invested in a training programme for site-based colleagues to manage the solution, as well as new standard operating procedures to support rapid deployment.

Mike Bullock, CEO of Corps Security said: “The Chief Medical Officer for England, Professor Chris Whitty, has said it is ‘wholly unrealistic’ to expect life would suddenly return to normal so organisations of all sizes need to plan for a different approach to building occupation. This is one of a number of tools that can help them.”

Mitie Security announced in April that it had developed a similar system by adapting existing thermal imaging technology that quickly detects raised human temperatures to within an accuracy of 0.3ºC, to raise the alarm for monitoring teams.