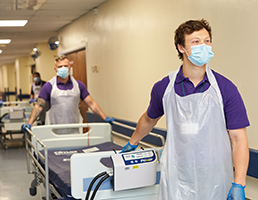 Medirest, the healthcare division of Compass Group UK & Ireland, has announced that it will pay its healthcare frontline employees who support the NHS the equivalent NHS Agenda for Change rate of pay.

Employees will receive an average 5 per cent raise in pay to match earnings of colleagues doing similar jobs in the NHS.

More than 2,200 Medirest employees providing catering, cleaning, portering and security services at 20 NHS trusts are now receiving aligned basic rates of pay where Agenda for Change is currently not in place. The uplifted pay will be implemented from 1 June.

In addition to the increased pay, Medirest sickness entitlement is also being improved. Other changes that have already been implemented include six-week bonus payments to healthcare frontline employees and their supervisors who have supported the national effort against Covid-19. During this time, employees have been given additional financial assistance, access to emotional and mental health support, 7,500 complimentary essentials food boxes and other care packages.

Steven Cenci, managing director for Medirest, said: “We want our colleagues to feel as valued as the NHS staff they work alongside. This new pay award recognises the exceptional work and the contribution our healthcare heroes are making at the hospitals in which they work.

“Over recent weeks our teams have shown extraordinary professionalism and commitment to their roles. We are incredibly proud of the work they have done to support the hospitals and communities in which they work.”