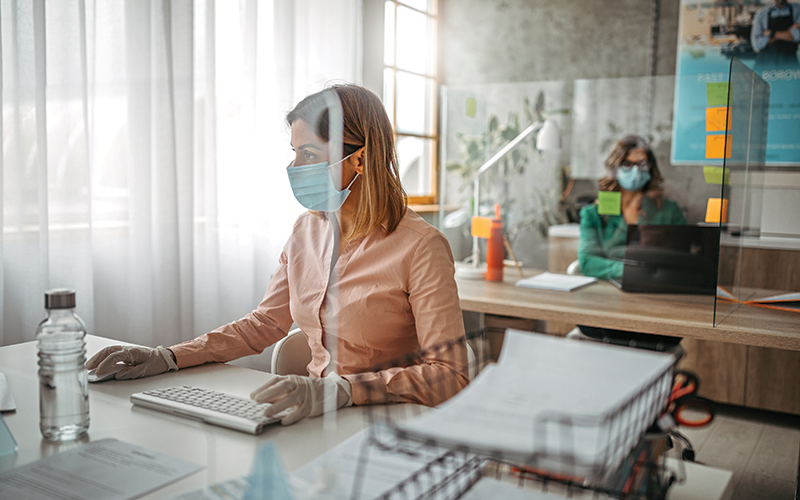 A survey from Office Space in Town (OSiT) shows that most employees (95 per cent) would return to work if a vaccine were found.

Health concerns remain a significant deterrent to returning to the office, with two-thirds of respondents being worried about contamination. Nevertheless, more than 60 per cent said extra cleaning measures would help them feel more comfortable, along with social distancing markers (52 per cent, face masks and gloves (52 per cent), hand sanitiser available at all desks (50 per cent), and sneeze screens (36 per cent).

However, physical health and wellbeing is also a concern for employees working from home.

Of those who participated in the survey, 70 per cent were working from home and 64 per cent of that group said their companies did not offer practical guidance to ensure that their homes comply with health and safety rules and they were concerned about the longer-term health impacts.

Respondents (29 per cent) also reported a lack of equipment while homeworking. OSiT maintains that this supports the research from the British Council for Offices showing an increase in musculoskeletal complaints such as:

The OSiT survey findings revealed that remote working has also had negative effects on people’s wellbeing:

Only 5 per cent of workers said they want to work remotely on a full-time basis once a Covid-19 vaccine is developed. However, of the 95 per cent that do want to return to the office after a vaccine is found, 59 per cent wanted greater flexibility in working hours.

There were, however, perks from working from home:

Niki Fuchs, managing director of OSiT, said: “The survey results show that, given the chance, people would significantly prefer to be in the office. It seems that working from home is neither a sustainable option for the majority of people nor for their employers. We thrive on the water cooler moments, in-person collaboration and development opportunities cultivated in the physical office, where a professionalised environment fosters productivity and community.

“As we all look ahead to getting back to the office safely, employers and office providers should remember they have a responsibility to ensure people feel comfortable to return to work. The steps unveiled in this survey offer a simple, realisable road map for this – provide a clean environment and offer flexible hours to encourage people back to the office and back to normality. It’s what the majority of workers want – so, let’s deliver it for them.”