Keep an open mind on open-plan 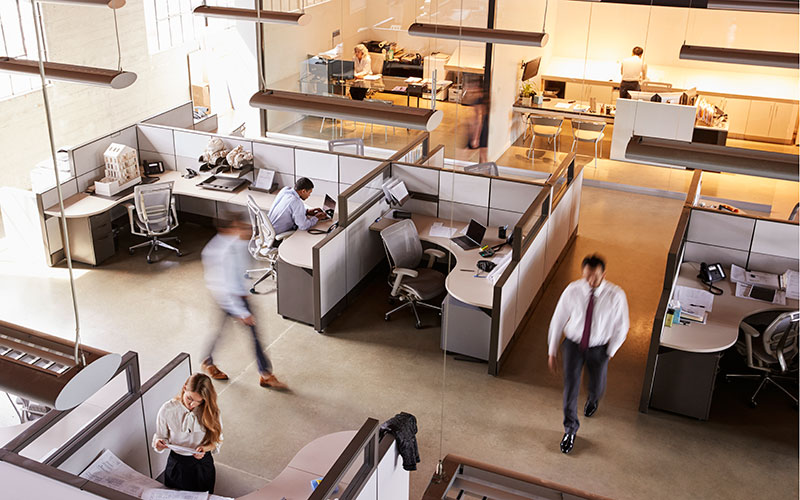 Are the days of open-plan offices numbered? – iStock

“For it to work properly,” says Nigel Oseland, director of Workplace Unlimited, “we have to go back to the days before we became too cost-focused and start to think about how we can provide open-plan spaces that support workers and their performance.”

Much of the critique of open-plan design in the media – “not from you guys”, Oseland says – stems from studies that fail to identify which of the very many variations have been the focus of the research. It’s best to think of open-plan as existing along a spectrum of possibilities, with each of varying quality.

“When most of us think of open-plan, we think of the worst-case scenario: a sea of desks – high-density desking at that – so very little space and people crammed in a bit like call centres or battery hens if you like.”

Oseland recounts his early days of working, back when desks were 2 metres wide, significantly bigger than the current industry norm of 1.4m. He says a client he has worked with even suggested reducing this to 1m.

“We're just increasing the density over time; we’re putting people on top of each other and that’s bad for noise, bad for temperature because the buildings can't always cope with these increased and intense densities, and, of course, it’s particularly hard for cross-infection from airborne diseases.”

Worst-case scenario open-plan often lacks social, breakout and meeting spaces or quiet pods. “I think that’s why open-plan gets bad press because quite often we’re focusing on just poorly designed open-plan; whereas I believe open-plan has got its merits and I think there’s a place for open-plan.

“It has to be done properly and to do that, we have to move away from thinking of the open-plan as this opportunity to save lots of space and property costs and start to think about how the open-plan can actually support the people within it.”

Taking such an approach would require lower-density environments, more facilities and bigger desks ideally set out in clusters of two to four rather than eight to 10.

Oseland says it should be more like the social democratic ideals of the Bürolandschaft offices of 1950s Germany, which departed from the prevailing Taylorist view of open-plan – rows of desks neatly spaced out – to reach a “more organic and free-flowing” space with “emphasis on the individuals and how they work”.

Sadly, however, the Bürolandschaft ideal was lost to the obsession of space and cost efficiencies. And with the current financial pressures and announcements from big organisations that they will be reducing office space, there is an even greater risk of ending up like sardines in a shrunken tin.

Nevertheless, despite accusations that he is being impractical, Oseland says the coronavirus pandemic is an opportunity to rethink how we use office space. Let’s not rush to cut office space in half. “Let's make it more humane, less dense and actually better for health and wellbeing.”

Check out the next edition of Facilitate (with readers in the first week of October) in which we address whether the pandemic has tolled the bell for open-plan design.