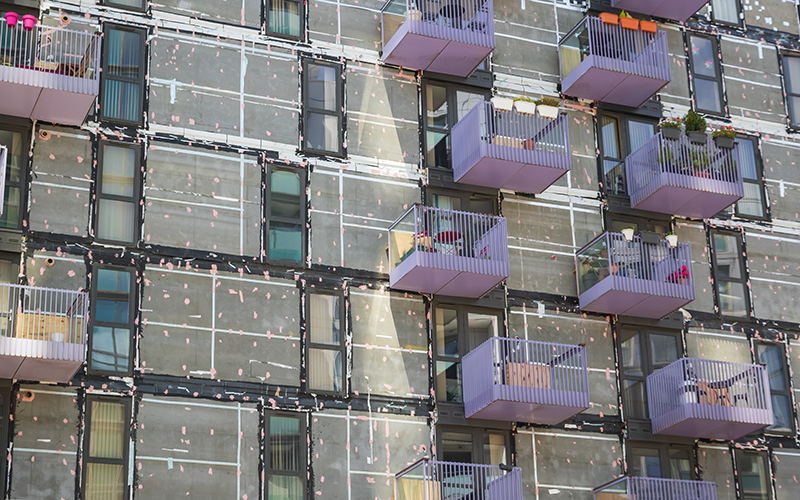 Exposed cladding to be removed – I Wei Huang-Shutterstock

The government has launched a fund to enable tens of thousands of residents in high-rise buildings to access financial support to make their buildings safer while they wait for the completion of remediation work.

The announcement comes the same day that Labour Party leader Keir Starmer has set out a series of demands to tackle what the party calls the “cladding scandal”, as new figures suggest up to 11 million people are at risk from "life-changing cladding costs and unsellable properties".

The government fund will "protect leaseholders from the high costs of ‘waking watches’, where a building is continually patrolled in case of a fire, by providing financial support for fire alarms, which will also make buildings safer in the long term”.

The fund will be distributed through councils, regional authorities and directly through the Ministry of Housing Communities and Local Government, depending on the location of the building. The funding will be targeted in the areas with the largest numbers of unsafe buildings across the country, including  Manchester, Birmingham and Leeds.

Buildings over 18 metres with unsafe cladding systems and where waking watch costs have been passed on to leaseholders will be eligible.

Housing secretary Robert Jenrick said: “We know many people are anxious about the costs of waking watches, which was always only intended as an interim measure while historic safety issues were fixed. This fund will relieve the financial pressure on residents in these buildings and ensure they will be kept safe.  I encourage those who are eligible not to delay and start their applications swiftly so we can distribute the funds as quickly as possible.”

The criteria for the fund have been published, setting out which buildings are eligible for funding, the evidence needed to apply and how applications will be assessed, as well as the way the funding is provided.

The fund is "not a substitute for swift remediation of unsafe cladding – for which the government  has provided £1.6 billion in  financial support".

Around 95 per cent of the highest-risk buildings with unsafe cladding similar to that found on Grenfell Tower have been made safe or have work under way compared with a year ago; with work starting on 159 buildings last year compared with 90 in 2019 – representing more buildings on site with remediation work in 2020 than at any point previously, said the government.

In its proposals, the Labour Party has called for a national cladding task force to “drive this work after years of delays and ineffective measures from the government”.

The task force would be given strong powers to establish the full extent of dangerous materials on buildings, prioritise them according to the risk and ensure there is enforcement against those who refuse to undertake works.

Labour’s analysis of figures from the New Build Database and the ONS suggests “the cladding scandal could be even larger than previously thought, affecting as many as 11 million people”, it states.

The Labour Party argues that the “New Build Database estimates it may affect up to 4.6 million properties, with an average of 2.4 residents per property. Data also shows the scandal risks freezing the entire market for flats, after sales halved compared to last year".