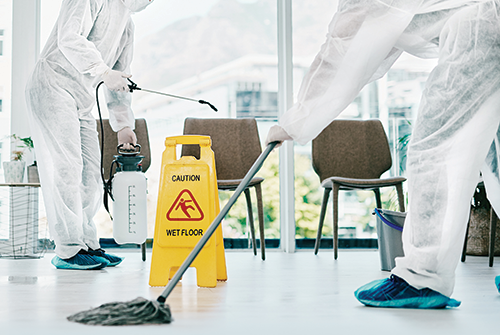 This month the All-Party Parliamentary Group (APPG) for the cleaning and hygiene sector was inaugurated.

The group was put forward as an idea last year and is now officially active.

However, British Cleaning Council Chairman Paul Thrupp said: “We are currently going through a Parliamentary process to register the APPG. Once that is done, we expect members will discuss and agree on their agenda and priorities. We'll be helping them to do that over the coming weeks.”

A total of 53 MPs and three members of the House of Lords have indicated that they will join, making it one of the bigger and most credible APPGs, according to the BCC, which is sponsoring the group.

At the inauguration meeting in February, MPs elected Nigel Mills, MP for Amber Valley, and Lady Greengross as co-chairs, and agreed on vice-chairs and the make-up of the committee that will run the group.

The aim of the APPG is to represent the interests of the cleaning and hygiene sector in Parliament and to influence MPs, ministers and the government.

One of the items that the BCC wants the APPG to put on the agenda is the status of the sector’s operatives as key and essential workers, and their priority for Covid-19 vaccination, at the top of its agenda, in recognition of their role fighting the Covid-19 pandemic.

In a press conference before the inauguration, Thrupp said it was about time the industry had representation because it was “a £54 billion industry that employs over 1.6 million people, which is around 5 per cent of the GDP – putting cleaning in the top 10 UK industries”.

He added: “The APPG will help ensure policymakers are aware of the vital work we do and ensure the sector’s voice is heard in decisions that affect it. An industry of such large scale and huge importance as ours needs to have this kind of representation in Parliament.

“I’m particularly pleased that so many MPs have agreed to give the group their backing. Such widespread backing will ensure it is highly credible and influential.”

One of them was “the creation of a recognised and universal training accreditation for cleaning and hygiene within the UK”.

He said: “Cleaning is not simply an add-on to someone’s day job and if carried out incorrectly it can compromise the environment and potentially delay the recovery from Covid-19.”

Deputy chairman of the BCC, Jim Melvin, said: “We have recently seen the prime minister praise the work of cleaning operatives who maintain hygiene at the most unsocial hours and have done bravely throughout the pandemic. It is surely true now more than ever to recognise that this is not a role that is exempt of skill, but one in which we have more dependency now than ever before?”

Melvin said the formation of the group showed that there is “growing recognition of the industry’s contribution and the vital work of its personnel, particularly in the fight against Covid-19”.

Melvin added that “many people haven’t seen this industry as a career” but the group was a chance to start changing the perception of it through an accreditation.

Another issue BCC hopes the APPG will address is to take a very close look at how the immigration rules will affect the industry.

Thrupp said: “We also want to consider the impact on our people’s wellbeing as we see the wider introduction of automation within the industry.”

Other priorities will be the fight for the Real Living Wage to be paid across the sector, highlighting wellbeing and mental health awareness, and to commit the industry to “full compliance with the Modern Slavery Act, within the UK cleaning industry and its supply chain”.

Thrupp said: “We also want to ensure product safety and the elimination of unregulated products with unsubstantiated claims.”  This was an issue that was highlighted during the pandemic, with fake PPE being sold.

The BCC has been working alongside former MP for Stirling, Stephen Kerr, to support the establishment of the APPG, as well as encouraging member organisations and cleaning and hygiene companies to lobby their MPs to join. He said that the “pandemic had shown that a cleaning and hygiene voice was needed” in Parliament.

Kerr, who has had 30 years in the industry as the director of various cleaning bodies, said the group would at least “last until 2024” when the current session of Parliament is due to end – with hopes that it will endure beyond that.

He said the group would produce a regular newsletter for all 650 members of Parliament about the topics and issues of the industry that need to be addressed.

Plans for the group were announced late last year as the coronavirus pandemic pushed the industry even more to the fore.

A new and welcome impetus

Facilitate editor, Martin Read, reflects on how the cleaning industry has finally become recognised enough to have its own parliamentary group.

“It’s nearly a quarter of a century since John Major’s Conservative administration sought a conversation with the wider cleaning industry, calling a meeting with just that intent. I recall the then-minister for small business, Richard Page, complaining about how the cleaning industry was represented by too many representative bodies – 17 back then – and that this was unhelpful for a service sector seeking to show a united front to central government. 'Sort yourselves out and come back to us when you’re ready' was the general message.

“Of course, even back then the British Cleaning Council existed as the de facto umbrella group for the sector. But we have since lived through everything from the introduction of the minimum wage to ‘best value’ and, since last year, the broader acceptance of cleaning’s value brought about by the pandemic. So, much has changed, but much in terms of structure and conditions has stayed the same. Over the years even Parliament's own cleaning arrangements have come under the spotlight, but any real shift in appreciation of the sector has been slight.

“What’s so encouraging here is that it is the politicians who see the value of regular conversation with the sector, the BCC acting as the principal connection on the industry side.

“APPGs may be informal groups, but they are a heartbeat away from influencing policy and as such very valuable. Twenty-five years on, this shift in the political conversation about cleaning, with all it could mean for those who perform the task is most welcome.”