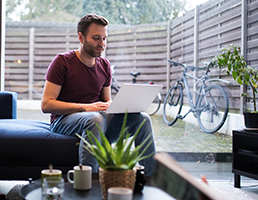 Remote working has enabled businesses to keep running efficiently throughout the pandemic. – iStock

Remote working will play “a huge role in post-pandemic life” despite Prime Minister Boris Johnson’s recent comments that it would not be a part of the ‘new normal’, according to a technology company’s VP.

Last Friday, Johnson spoke at a rail industry conference in which he said workers would return to offices in “a few short months” and a more traditional way of working and meeting colleagues face to face, rather than remote working becoming normalised.

But Mark Sweeney, Citrix's regional VP of UK and Ireland, has said: "While the prime minister is undoubtedly right that many office workers may have a strong desire for face-to-face meetings once again, this does not mean remote working will not play a huge role in post-pandemic life.”

Research by Citrix found that flexible working initiatives have “improved both the professional and personal lives of many UK employees – through the flexibility to perform at their best, no matter where they are and what other commitments they have to juggle”.

Sweeney said: “It’s telling that 46 per cent of the employees we surveyed said they would only accept a role which offered flexible work options if they were to change jobs, highlighting a clear desire for remote working to remain in some capacity and the potential loss of talent for any company that reverts back to an entirely office-based way of working.”

He added: “When planning for the future, business leads should work with their HR teams to learn what works best for their employees and – where possible – promote choices around working models, instead of implementing blanket policies around the location of work. A key learning we should take from the past year is that work is not dictated by a particular place, and should companies use flexible technologies – such as cloud-based virtual desktops and apps – to offer employees a hybrid model of working, then they are likely to see happier and more engaged workers that stay committed for longer.”