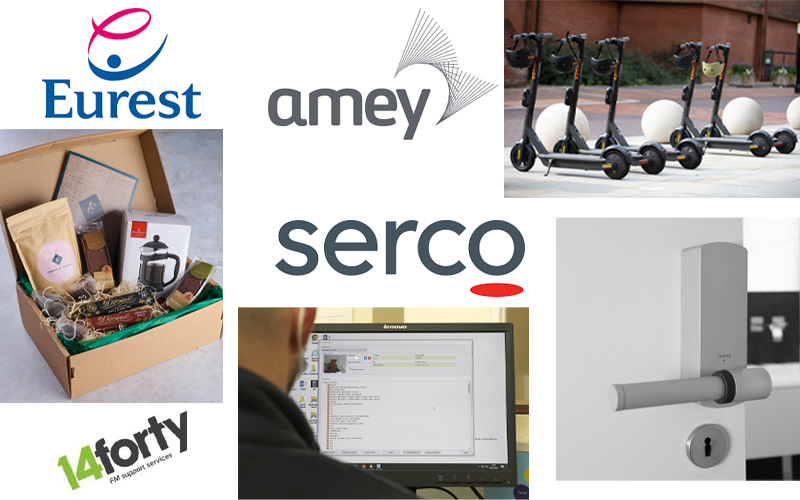 A news round-up of stories in the FM sector

Swiss tech company Tweaq launched its self-cleaning aluminium door handle, Touch 1, in November 2020. Customers can order now for delivery in July 2021. The user engages with the door handle as they normally would. Then, once the door handle is released, a sensor activates a peristaltic pump to dispense disinfectant liquid from the casing into the sponge located inside the ring around the door handle.
An internal electric engine drives the outer aluminium ring backwards and forwards once along the surface, eliminating 99 per cent of bacteria and viruses in under three seconds. Touch 1 is powered by a lithium battery found in each cartridge, which also houses the disinfectant tank. Each cartridge allows for up to 1,000 uses and both the battery level and level of disinfectant can be monitored using the Tweaq app. Installing Touch 1 takes less than 10 minutes and can be used with standard doors with no modifications required. The cartridge replacement is also quick and simple for users to replace after 1,000 uses.

Amey has been partnering Staffordshire County Council in a six-month trial with electric scooter providers Ginger and Zwings to launch micromobility trials in Stafford and Newcastle-Under-Lyme, as part of the £22.9 million ADEPT Smart Places Live Labs programme. Since the trial began in September there have been more than 18,732 rides taken covering a total distance of 93,676km – twice the circumference of the earth. These rides taken, when compared with car journeys, have saved an estimated 13,066kg of C02. Now, as the country starts to come out of lockdown, those living and working in Staffordshire are being encouraged to try e-scooters as an alternative mode of transport to navigate the towns. The SIMULATE team is also deploying e-scooters into more rural locations in Staffordshire to further understand the feasibility and impact of micromobility in rural settings.

Workplace caterer Eurest (part of Compass Group) and FM services provider 14forty have partnered with charity Mental Health UK in a campaign to emphasise the benefits of taking regular breaks at work. The partnership will see Eurest and 14forty’s staff and customers benefit from enhanced mental health initiatives to increase awareness using resources such as guides, webinars, and signage. Over the next year, the companies will also donate 5p for every cup sold of ‘Coffee by Eurest’ and ‘Peak St.’ brands to Mental Health UK. Eurest and 14forty will also carry out fundraising activities including Mental Health UK’s ‘Step by Step’ event. This will see participants challenge themselves to walk distances of their choice and raise money for the charity through sponsorship. The companies serve or sell tens of thousands of cups of coffee every week across 700 sites nationwide.

Serco, which runs six prisons in the UK, has trialled a new electronic system to manage prisoners’ property at HMP Dovegate in Staffordshire. Loss of prisoners’ belongings, which are being held for them while they are in jail, has been a challenge in prisons, particularly when transferring prisoners to and from other prisons and the courts. Currently, care of prisoners’ property depends on manual property record cards and problems can occur due to the mixed quality and differing handwriting, illegible prisoner signatures and interpretation errors. The Electronic Prisoner Property Management System (EPPMS), developed in conjunction with Unilink, uses spare capacity in the prison’s custodial management system, a computer system used to manage many other aspects of prison life, including prisoner requests and activities.