Kew Gardens launches bid to be ‘climate positive’ by 2030 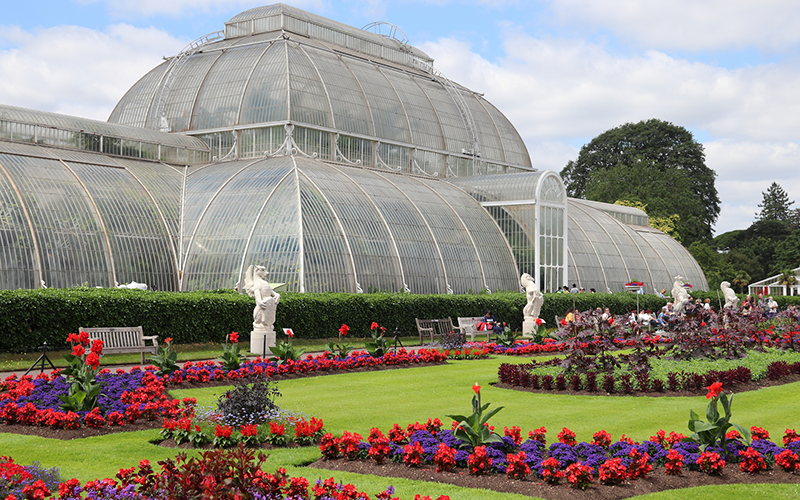 The Royal Botanic Gardens at Kew (RBG Kew) has released its first Sustainability Strategy today (25 May), setting out a series of ambitious commitments to lower the organisation’s carbon footprint.

It pledges to use its “trusted voice, alongside its workforce of leading plant scientists and network of global partnerships, to call for the change needed to tackle the environmental emergency”.

Its overarching target is to exceed net-zero, with Kew committing to become ‘climate positive’ by 2030, setting a science-based carbon emissions reduction target. This goal is one of the commitments outlined in Kew’s 10-year strategy ‘Our Manifesto for Change’ published in March.

The organisation says: “Rapid change must take place this decade if we are to prevent more than 1.5 degrees of warming, which will bring devastating consequences for people and nature”.

RGB Kew is internationally respected for its outstanding collections as well as its scientific expertise in plant and fungal diversity, conservation and sustainable development in the UK and around the world.

The science and conservation body, with bases in London, Sussex and Madagascar, is aiming to cut emissions as fast as possible, and to surpass the offset of any unavoidable emissions by investing in nature-based carbon sinks.

The three routes to achieving its sustainability goals identified in the strategy are:

Richard Deverell, director of the RBG Kew, said: “This new strategy and commitment to be climate positive by 2030 is the culmination of many years of work. Tackling the environmental emergency must sit at the very heart of everything we do and as a global plant science institution and visitor attraction, we have a unique responsibility to act now. Failing to take urgent action will cost us severely and will leave us unprepared for the unprecedented challenges of the decades to come. This is just the start of a journey in which we will all need to play our part.”

As part of this pledge, ahead of COP26 being held in Glasgow in November, RBG Kew has joined the Race to Zero, a UN-backed, global campaign to rally leadership and support from businesses, cities, regions and investors, for the necessary shift to a decarbonised economy that would prevent future threats, create decent jobs, and unlock inclusive, sustainable growth.

The sustainability strategy sets out how RBG Kew aims to accelerate these plans, starting with its own operations and activities at its two UK sites, Kew Gardens in London and Wakehurst in Sussex.  Kew’s progress so far  includes:

Collaboration with the public

Visitors to Kew Gardens and Wakehurst (and digital followers) will be able to see some of this action come to life. For instance, the new Family Kitchen & Shop set to open in Kew Gardens in autumn 2021 will have a real-time display showing the amount of energy generated from solar panels in the roof. Kew will also encourage visitors to make greener choices by offering more plant-based food options in its catering facilities, encouraging visits to the site by bicycle or public transport, and asking people to bring their own reusable cups.

Rachel Purdon, Kew’s head of sustainability, said: “We want everyone to share the urgency and the commitment to change that underpins our ambitious new strategy.  Cross-sector partnerships and collaborations are vital, as is the engagement and action of our supporters and visitors in bringing about the change we desperately need to see to save our planet.”

Kew’s 132 hectares of landscaped gardens, and Wakehurst, Kew’s wild botanic garden in Sussex, attract 2.5 million visits a year. Kew Gardens became a World Heritage Site in July 2003 and celebrated its 260th anniversary in 2019. Wakehurst is home to Kew's Millennium Seed Bank, the largest wild plant seed bank in the world. The Kew Madagascar Conservation Centre is Kew’s third research centre and only overseas office. RBG Kew receives a third of its funding from the Department for the Environment, Food and Rural Affairs and research councils.