Fire reforms post-Grenfell are slow but progress is emerging 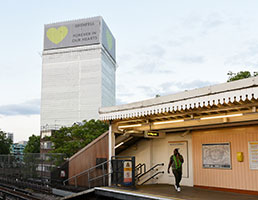 Fire safety reforms are not moving fast enough after the tragic Grenfell Tower fire in 2017, according to some – Shutterstock

A fire door industry body states that it feels "frustrated" at the slow progress of fire safety reforms four years since the Grenfell Tower Fire.

The Door & Hardware Federation (DHF), a not-for-profit trade association, said that although problems are being addressed, "English building regulations are still largely unchanged" especially when it came to emphasising the importance of fire doors.

The importance of fire door maintenance has been confirmed by recent evidence to the Grenfell Inquiry, in which it was revealed that inspection of the flat entrance doors in Grenfell Tower generally took place only when a resident moved out or during major work programmes.

Following the fire, it was discovered that approximately two-thirds of the door closers were broken or missing. This led to some fire doors remaining open and this undoubtedly had played a part in the loss of life.

DHF cites the recent passage of the Fire Safety Act 2021 (covering England and Wales), as an example of some progress. The body states that the act has clarified the responsibility for fire safety inspections of flat entrance doors which amends the Regulatory Reform (Fire Safety) Order 2005, specifying that the “responsible person” under the order is responsible for, among other things, flat entrance doors.

The DHF says that previously, "this was not entirely clear".

It welcomes this clarification, which it says "should serve to improve standards of maintenance".  The DHF stated that it shows the industry is rising to the challenge, with one outcome being an upsurge in demand for fire door inspection training.

It added that it has seen this increase in demand first hand. It works collaboratively with the BRE Academy to provide a series of training courses, one of which is fire door inspection. So far this year, there have been 37 courses delivered and a raft of online courses taken.

Disclosures from building materials manufacturers at the inquiry have preceded the recent creation by the government of an independent review of the construction products testing regime. The body says that evidence at the inquiry has suggested that the existing system made it "too easy to cheat" and it welcomes "a more rigorous and thorough approach".

Michael Skelding, DHF’s general manager, said: “We look forward to cooperating with the review and continuing to promote third-party certification of fire doors as part of the solution to this problem."

The review is headed by Paul Morrell OBE and Anneliese Day QC.

Product information is also the focus of another initiative supported by DHF – the Code for Construction Product Information (CCPI), which is due to be launched later this year. This has been created by the Construction Products Association (CPA) to help to ensure that information about construction products is always clear, accurate, up to date, accessible and unambiguous. The code, although voluntary, is supported by major contractors, which will help to ensure its success, said the DHF.

Skelding added that the DHF is pleased "to be able to play a part in these various initiatives, whether led by government or industry, which are helping to improve the construction industry’s competence”.

He said: “It should also lead to the availability on the market of correctly tested products, accompanied, of course, by accurate performance data.”