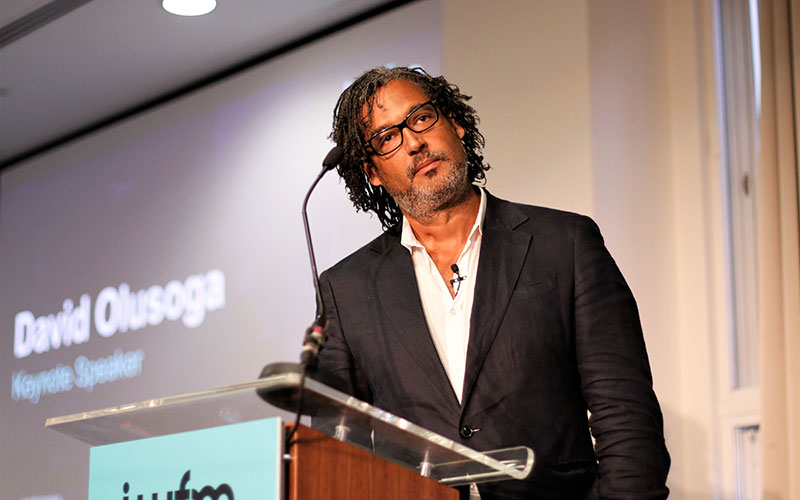 Companies have begun the process of looking into their practices and cultures as a way of tackling structural racism after the Black Lives Matter protests during 2020 and 2021, said historian, broadcaster and film-maker David Olusoga at the IWFM conference this week.

Olusoga, who gave the last keynote speech of the event, said the Black Lives Matter protests during 2020 and 2021 had "transformed debates around race" and this call was being recognised by companies more than politicians.

He told delegates: "If you turn off the background noise of Westminster, of the tabloids, and instead listen to what's happening within organisations, what you realise is that this is an enormous moment of change – a shift of consciousness – that is being led from the bottom up by the private sector, rather than politicians who are seeking to exploit this moment for electoral gain. They are not able to offer leadership at the moment and organisations and individuals are taking the lead themselves."

Olusoga said whole sectors of the economy have "begun the process of looking deeply, honestly and self-reflectively into their practices, into their cultures". They have started to confront the ways in which "old ideas that linger on can damage people without meaning to" and "can infect our practices" and "normalise the abnormal". He added: "They can prevent us from seeing things that our rational selves, would be repelled about."

Understanding that race is structural "is not an attack or an assault or a libel against our society as its so often mischaracterised. It's an intellectual tool to help us demolish an idea that was built and propagated and spread around the world by men who have been in their graves for two centuries".

Since the Black Lives Matter protests of 2020/21, the idea of structural racism has become an important topic.

Olusoga said: "Structural racism, like every idea that has come out of the study of race for more than a century, is being deliberately distorted and misrepresented because structural racism doesn't mean hyper racism. It does not mean our society is irredeemably racist, it's not a way of expressing your hatred of Britain or of white people.

"What structural racism argues is that this idea of race – one of the most powerful, toxic ideas ever created, now hundreds of years old – exists deep within the fabric of our society in ways that are difficult to recognise. Racism is concealed within our cultures, our practices,  and can unintentionally or unwittingly discriminate or damage people of colour. It exists in our subconscious and that is true of all of us, irrespective of our own race.

"The idea of race – the idea of black inferiority and white superiority – is structural, historians would argue, because it was constructed by men who sought to defend slavery and the slave trade and then it was repurposed and adapted by men who wanted to use it to justify imperialism. Over the centuries, vast amounts of money, billions of hours of efforts and ingenuity were poured into creating the ideas and stereotypes that were used to justify slavery and empire and they have worked their way into the fabric of our society so deeply that they have long outlived the phenomenon they were invented for: to defend and justify."

See the latest issue of Facilitate for an interview with David Olusoga.

Further reports on the IWFM Conference presentations will appear over the next few weeks.

See a previous report on the event here.