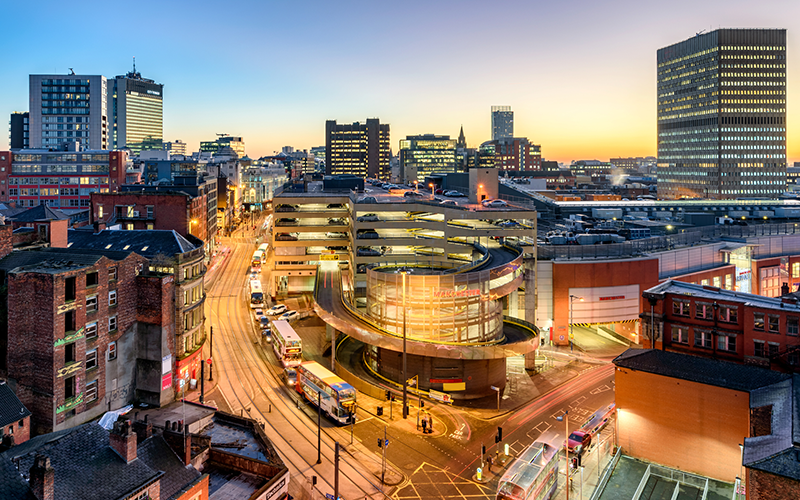 Six of the UK’s key regional economic centres risk not achieving their net-zero targets unless significant action is taken to upgrade and improve their commercial real estate in the next 10 years, according to analysis by JLL.

The Sustainability and Value in the Regions report concludes that 90 per cent of the office stock in England and Wales’s largest regional office markets is at risk of not meeting the UK government’s target for all non-domestic properties to have an EPC B rating by 2030. These findings come at a time when three of the cities analysed – Birmingham, Bristol and Cardiff – have committed to achieving net-zero status by 2030. Leeds and Manchester, both aim to be net zero by 2038.

With no completed office development across the eight UK regional centres – including Edinburgh and Glasgow – having yet achieved the UK Green Building Council’s embodied and operational net-zero carbon standard, the research also finds that just 16 per cent (20 million square feet) of existing regional office stock is rated BREEAM Good to Outstanding.

The findings point to the need for a significant programme of refurbishment and retrofitting, delivered over the next decade, to support the green agendas of local authorities as well as occupiers. The research identified that the office footprint of regional firms with science-based sustainability targets has more than tripled in the past three years to almost 4.5 million square feet.

JLL estimates that the UK’s rate of repurposing commercial stock needs to hit 5 per cent annually in order to help the country hit its 2050 carbon-neutrality goal, which would be more than double the levels of redevelopment seen in the past decade.

Jeff Pearey, head of regional office agency at JLL, said: “As well as the net-zero deadlines set by local authorities, we’re seeing a conscious shift in mindset among occupiers which, will ultimately lead to improving achievable rents and increasing the speed at which investors and developers are able to lease sustainable properties. Equally, investors are driving the agenda, with two-thirds prioritising the sustainability of the portfolio more so than they have done in the past 12 months. 2030 is, in reality, just one property cycle away, so it’s critical that office stock keeps up with these ambitions and that some of the UK’s most important cities aren’t held back by low-performing assets.”

Elaine Rossall, head of UK offices research at JLL, said: “As COP26 has only served to reinforce, the next 10 years are imperative to the future of the planet. The built environment accounts for around 40 per cent of all carbon emissions, but is even higher in many cities, meaning our cities and commercial centres must change or risk undermining any regional efforts – now set in stone in the carbon frameworks of most major cities – to achieve net-zero status in the 2030s. This research indicates just how far short of those targets  some regional office markets will be if, in addition to ongoing investment in new low-carbon stock, the vast majority of existing offices aren’t improved via refurbishment or retrofit.”