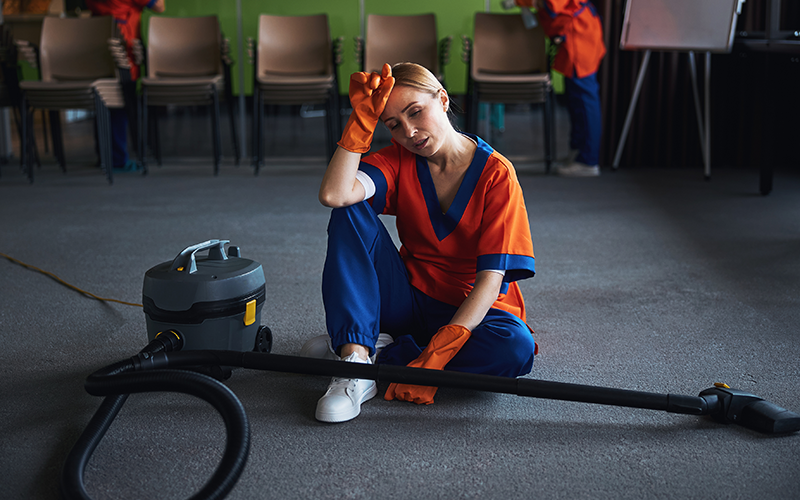 A continuing shortage of contract cleaning jobs could put remaining workers at risk of “burnout” and increase costs for contractors, warns the British Cleaning Council (BCC).

In an interview on BBC Radio 4, group CEO at The Exclusive Services Group and BCC chairman Jim Melvin said that its members were trying hard to cope with a staffing crisis.

“People are taking additional hours and overtime and the worry is that people burn out,” said Melvin. “In some cases, identifying key areas for clients spending more time in those areas rather than across a whole site and employing mobile cleaning and hygiene operatives at additional cost.”

He said that some contractors were asking clients to change their practices and open buildings up for cleaning on a 24/7-hour basis if necessary.

Turnover of staff and people leaving the industry is an increasing concern as workers seek higher pay elsewhere or move to other contractors who have increased wages to attract staff during the shortfall. Melvin said contractors had lost staff to HGV driving or government-assisted jobs.

The pandemic, some foreign nationals going back to families, and people changing their work-life balance have also all contributed to the shortage, and the fact that the Immigration Act 2020 lists cleaning as exempt of skill, or low-skilled, does not help, said Melvin.

He also warned that wages would be inflated and most cleaning contractors would look at ways to negate cost increases before they go to clients.

“There’s no question that if we don’t do something about this now, that’s [wage rate increases] going to be further down the line, which only adds to inflation.”

He added: “There are certainly rate increases going on throughout the country.”

However, Melvin also said that cleaners should be recognised as key workers and highlighted the role that they played in allowing first responders, health workers and staff in other key sectors to do their jobs with confidence and in safety.

Last month, the BCC warned that the rate of staff vacancies in the cleaning and hygiene industry “could hamper the nation’s recovery from Covid-19” with cleaning in the healthcare, transport, leisure and food hygiene sectors badly hit.

Eleven of the industry’s biggest firms took part in a BCC survey, reporting a total of 1,917 vacancies. Two firms said that their number of vacancies over the past six months had increased by 252 per cent and 267 per cent respectively.

Most reported the reason for this problem being foreign nationals going home or employees moving to other jobs such as truck driving or hospitality.