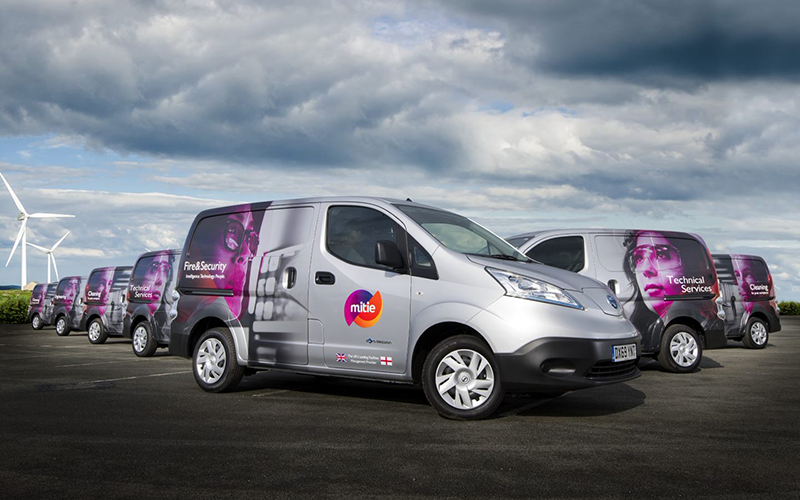 Mitie has exceeded its target to convert 30% of its fleet to zero-emission electric vehicles (EVs) by March 2022  – three months ahead of schedule.

Consequently, the FM provider has increased its target to have 35% of its fleet electric in the same time frame.

Mitie now has a range of electric cars, vans, and even a gritter, taking its total by the end of 2021 to more than 2,000 EVs, which it believes to be the nation’s largest electric vehicle fleet. The vehicles are based across the UK, as well as EVs working on contracts in Overseas Territories, including Ascension Island in the South Atlantic Ocean. The company has also invested in the UK’s electric vehicle charge-point infrastructure, installing thousands of charge points for a broad range of its clients, and at its employees’ homes.

The transition to a fully electric fleet is a key part of Mitie’s Plan Zero commitment to eliminate carbon emissions from its power and transport. Its current fleet of EVs reduces Mitie’s annual CO2 emissions by around 10,000 tonnes and the firm has a set timeline to switch the rest of its vehicles to zero emissions by 2025. Its fleet team has put a series of measures in place to cut emissions from its existing petrol and diesel vehicles – it claims its Telematics Driver Behaviour system has reduced diesel use by 75,000 litres and saved 19.5 tonnes of CO2 in a year.

The firm is carrying out a large-scale roll-out of electric vehicles to support more businesses to transition to zero-emission fleets. Last November it expanded its EV charging infrastructure capacity with the acquisition of Rock Power Connections.

Peter Dickinson, Mitie’s chief of staff, said: “Switching 30% of our fleet to electric by the end of March 2022 was already an ambitious target, so to have hit this milestone three months ahead of schedule is an incredible achievement and testament to the hard work of the Mitie Fleet Team.

“By creating the UK’s largest fleet of electric vehicles in just three years, we’re dedicated to sharing our first-hand expertise and learnings with our customers to help decarbonise Britain.”

A third of white-collar professionals have stated that they are “very likely” to leave their job in the coming months, unless more understanding and assistance is directed toward personal matters that affect their work.
Surveys
Open-access content
Filed in:
News
Also filed in:
Energy management
Sustainability
Environmental Quality