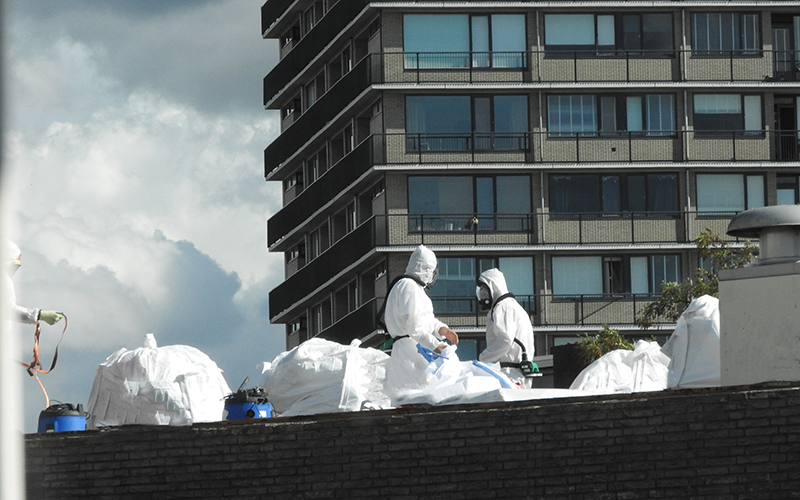 The government must commit to a strategy to remove all asbestos from public and commercial buildings within 40 years, say MPs in a report today.

They argue that the longer it takes to remove asbestos, the risk to health "is only likely to increase as buildings are adapted with the move to net zero”.

The report from the Work and Pensions Committee highlights how, despite being banned more than two decades ago, asbestos persists as the single greatest cause of work-related fatalities in the UK. There were more than 5,000 deaths in 2019, including from cancers such as mesothelioma.

An increase in retrofitting in response to net-zero ambitions means that more asbestos-containing materials will be disturbed in the coming decades and a cross-government approach is needed.

Many of these deaths will relate to exposures from 35 or more years ago. The available evidence indicates that cumulative exposures are much lower now for younger age groups, but more data is needed to understand the current picture.

As asbestos remains in about 300,000 non-domestic buildings and a likely dramatic increase in disturbance from net zero retrofitting is likely, the committee says that reliance on the current asbestos regulations will not be good enough. It concludes that a cross-government and “system-wide” strategy for the long-term removal of asbestos is needed.

The report calls on the government and Health and Safety Executive (HSE) to back up their stated goal of removing all asbestos by committing to a clear time frame and strategy. The plan should strengthen the evidence base on safe and effective asbestos removal in the first instance before prioritising removal from the highest-risk settings, including schools.

The government must also guarantee adequate funding for HSE inspection and enforcement of the current asbestos regulations, which has declined in recent years.

Stephen Timms MP, chair of the Work and Pensions Committee, said: “Asbestos is one of the great workplace tragedies of modern times and while the extreme exposures of the late-20th century are now behind us, the risk from asbestos remains real.

"The drive towards retrofitting of buildings to meet net-zero aspirations means the risk of asbestos exposure will only escalate in the coming decades. Falling back on regulations that devolve responsibility to individual building owners and maintenance managers will not be sufficient to protect people’s health.

"Setting a clear deadline of 40 years for the removal of asbestos from non-domestic buildings will help to focus minds. The clock is ticking and the government and HSE must now come up with a strategic plan which builds the evidence on safer removal and prioritises higher risk settings such as schools.

"This is no time for laissez-faire. The government needs to fund the HSE properly to allow it to reverse the decline in enforcement activity seen in the decade before the pandemic and ensure that asbestos, and its removal, is managed safely and effectively.”

Ruth Wilkinson, head of health and safety at the Institution of Occupational Safety and Health (IOSH), said: “We support the recommendation for there to be an overall ‘plan’ developed by the government and Health and Safety Executive, but we urge caution over doing this without research and evidence around safe removal and disposal.

“Removing asbestos is something which is fraught with risks, so any decision to do so is something which cannot be taken lightly. Full consideration must be given to how the people removing it are protected and where the asbestos goes from there, including its packaging, transportation and final disposal – particularly when considering the large number of buildings this plan will relate to.

“So we would expect to see that any such plans will include detailed information on how these risks will be managed to prevent significant exposure during this process.”

Wilkinson added that should a 40-year plan be set, there would still be a risk for anyone coming into contact with asbestos during that time.

She said: “It is crucial that greater protection is offered to these people, and that a risk-based approach is taken as recommended by the committee.

“There is currently a lack of consistency in managing asbestos among duty holders and a lack of awareness and knowledge about it among those who are coming into contact with it, particularly in smaller businesses. We would like to see a collective effort by policymakers, government, regulators, employers and worker representatives. This should include improved training for employees in how to deal with asbestos, clearer guidance around working with asbestos and more awareness-raising about the dangers of exposure. Action is needed now. People’s lives depend on it.”