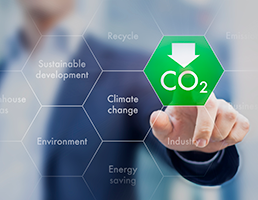 The UK’s World FM Day celebrations were brought to a climax last night with an IWFM international SIG discussion focused on embodied carbon and FM’s role in managing it - a subject ideally suited to this year’s World FM Day theme.

Chaired by David Green, director - asset & facilities management for Buro Happold, the event was held at the London offices of Bouygues Energies & Services UK and introduced by that company’s UK CEO David Carr.

First up was an introduction to embodied carbon versus operational carbon by Natasha Watson, UK embodied carbon lead at Buro Happold. For Watson, the near future - in which so many organisations will seek to repurpose workplaces post-pandemic - represents the perfect time to create strategies for the measurement of embodied carbon and associated mitigation policies.

Embodied carbon is the CO₂ emissions associated with all the materials and the construction processes required throughout the whole lifecycle of a building. Watson concisely broke this down into its constituent parts, including the chemical processes used in construction materials, transportation emissions, and the energy and heat required for processing and manufacture.

The typical lifetime maintenance and refurbishment of a Cat A office building in London would currently represent 32 per cent of its embodied carbon, she suggested, before breaking down the 35 per cent embodied carbon within the further construction phase into its specifics. (By comparison, 33 per cent of the same building’s emissions would be operational carbon.)

What’s worth considering, continued Watson, is that efficiencies in operational carbon reduction as a result of the emphasis on standards such as BREEAM would mean the balance of operational to embodied carbon in a building’s whole life assessment will continue to change over the coming decade, with embedded carbon moving from around a third of the total to being a majority percentage of a building’s total carbon cost.

So - how do you measure a building’s embodied carbon? That’s a question  of taking a quantity of material used and multiplying it by the carbon emissions rate per unit, with unit costs published in such reference products as the ICE’s CESMM4 Carbon & Price book and the RICS whole life carbon assessment for there built environment’, a 2017 document that’s due for an imminent update. Calculations need to be made for generic materials, specific products and the transportation of each.

BAM FM’s strategic development director Reid Cunningham offered a useful case study of his company’s partnership with lighting manufacturer Whitecroft and how a project to ‘upcycle’ existing fittings to move from fluorescent to LED lighting has developed from initial reconfiguration and reuse work through to an LED kit that can be fitted on site and now an entirely new Whitecroft product for the purpose that essentially creates a ‘circular economy’ for such projects. This kind of work, he argued, was what dealing with embodied carbon for fit-outs would increasingly look like.

Bouygues Energies & Services UK’s Amelle Metari then spoke of her company’s collaborations across its supply chain and how it is working with the Supply Chain Sustainability School to better measure embodied carbon at each stage of a carbon reduction projects. This includes working with SME suppliers on individual projects such as the life-cycle emissions of fossil fuel-based plastics, again emphasising the shift in focus from ‘recycling economy’ to ‘circular economy’ metrics. Procurement teams will continue to need training on environmental product declarations in order to make better purchasing decisions, she added, while presenting an example of Bouygues’ ‘whole facility approach’.

All of which was both sobering (in terms of the daunting administrative challenges ahead) and inspiring (in terms of the innovation and deep involvement of FM to the solutions required). And it was left to Alex Marmot, professor emerita at UCL, to round off with a wider view on why all of the technical work detailed earlier would become so important. Marmot spoke of ‘the great acceleration’ - the rising global population levels that remain difficult to predict - and the global temperature rises obliging the greater focus on embodied carbon measurement. We’re likely to benefit from seismic shifts in the deployment of smart property technology, she added.

A positive end to World FM Day, albeit one where the challenges ahead remained clear. One questioner expressed concern that there would still be considerable work to get organisations’ executive teams to appreciate and then invest in what was needed for fabric-first fit-outs on existing buildings.