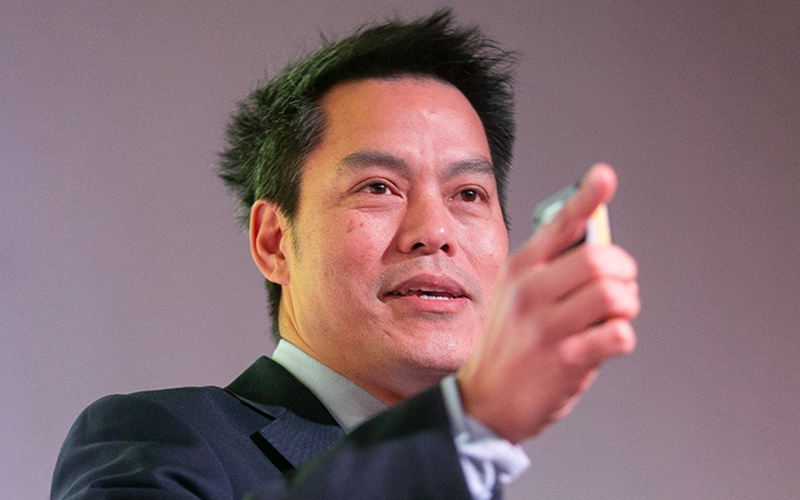 Professor Kevin Fong OBE is a consultant in anaesthesia at University College Hospital in London and part of its emergency response and major incident planning teams. At the IWFM conference he gave a powerful presentation about his work during the pandemic and how he came to realise the critical links between the NHS’s operations, and estates & facilities teams.

• The pandemic was a genuine national emergency and my job was to go into hospitals that were about to fall over. As someone who had worked in emergency planning, I was seconded in March 2020.

• When we modelled the likely infectiousness of the disease I couldn’t believe what was going to happen. I remember being on the tube and looking around at people, thinking ‘you’ve no idea what lies ahead’.

• As an anaesthetist, I have a deep empathy with your profession because, like you, no one really notices us unless something goes wrong.

• The partnership between ourselves and estates & facilities was the most important thing. It was everything: power, ventilation, oxygen – the whole thing.

• Usually, for us in medicine, that stuff is just magically there. But a dialogue had to happen between us and our facilities teams for them to understand our problems, and for us to understand their limits.

• At that point we asked questions we hadn’t asked before, such as: Where does all of this come from?

• We became familiar with what was under the floorboards, and discovered it was more than just a massive reservoir of limitless oxygen.

• We needed to realise that there were some shiny new hospitals that just worked, and some pre-dating the current monarch that didn’t work well at all. On paper they said they would work, so that was difficult for us to understand and led us close to catastrophe.

• We needed to run it for 55 million people. I felt sorry for the estates and facilities manager where the supercomputer is; it draws so much power that if you stand in that room you have to use ear defenders.

• We realised that our solutions lay at shop floor level, so I started putting visits into the facilities.

• There was no single point of control, no single point of command. In a fast moving crisis, the solution is not with your leadership team; their main role is to adapt, facilitate and, as far as possible, allow people on the ground to sort the situation. It’s Theodore Roosevelt’s philosophy: ‘Do what you can with what you’ve got where you are – and we’ll help you.'

• For the BBC, I’ve interviewed most of the people that ran the Apollo missions. I’ve interviewed [astronaut] Jim Lovell at length and this, for me, is the birth of what you understand as the modern art of estates & facilities management. This is the point at which we realised that the stuff we’re using to progress in society is not just a single-person operated vehicle; the spacecraft is not flown by three people, it’s flown by 3,000.

• Apollo 13 was not rescued by Jim Lovell; it was rescued by the many flight controllers responsible for everything from the supply of water and electricity, the temperature, the air exchangers, its trajectory…

This is how you survive. In the face of uncertainty:

• The thing that makes decisions in the face of uncertainty possible is the understanding that you’re going to get it wrong, and that you’ll go again the next day, get it less wrong and eventually get it right.

Lessons from the NHS

• One thing we came to understand is how flexible our estate can be, and also where it has its limits. That is when you need to pivot your operation. When you look at the resilience of organisations, there is a strategic role to be played by its buildings. I bet nobody will look at air handling again in the same way after the last two years.

• The partnership between ops and yourselves, that was the winning or losing of it for us. That none of our hospitals ran out of oxygen is incredible given where we were.

• We need to understand that the things we operate now are not those things from the middle of the 20th century which are just physical structures with no flexibility; there is flexibility, and the partnership between the ops team and the people that build and maintain these things is everything. It’s not just for a crisis. It is for wellbeing.

• The other thing I’ve been doing is looking at how we recover our workforce. It’s clear to me that wellbeing isn’t just chucking them yoga mats and free yoghurts.

We need to learn the right lessons:

• For us, when we have a bad incident at the level of a single patient we take the team aside and have a frank conversation about what went badly and what went well, and what’s badly needed here. I’m unclear that the mechanism to promote that exists at this time.

Maintaining the partnership between estates and critical delivery

• This is about organisational memory. A lot of our most experienced people who worked during the pandemic are leaving the service now. It’s important to capture this [learning] however we can, but it’s easier said than done.

• I’ve just helped write a public policy paper showing that if you look after staff wellbeing you boost retention and reduce absence and presenteeism; you can save about £12 billion in a year for the NHS on conservative economic modelling. The NHS is inefficient, just not in the way you think. The NHS is inefficient with our people, which is a reprehensible kind of inefficiency –- and  we need to get past it.