A matter of perception 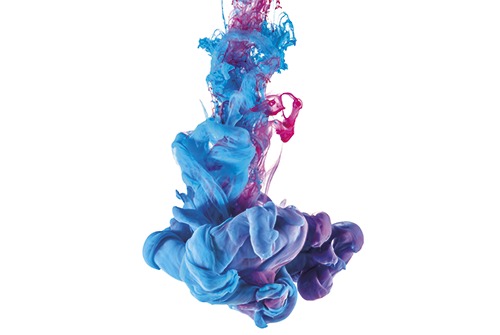 The perceptions of facilities managers leave a lot to be desired, reports Dean Gurden.

A 2017 survey by the IWFM (then BIFM) made for predictable but depressing reading, an overwhelming majority of FMs agreeing with the statement: 'People outside of facilities management don't understand what I do.'

You might at this stage argue the case that FM should be invisible anyway. But facilities managers can be forgiven for a certain amount of frustration that so many within the organisations for which they provide service still have such poor understandings of their role.

Thankfully, things are changing. Ian Seddon, senior facilities manager at Manchester Metropolitan University (MMU), believes that FM is increasingly sitting strategically within organisations, as it is in his.

"Take capital build," he says. "We never used to be involved until the handover and close out of a building, and then during its use. It might have won all sorts of awards architecturally, but its overall usability might have been terrible."

At MMU, FM now aligns strategically with capital projects at the design stage. "We feed in things that have gone well and not so well on buildings, so it can be changed at this early stage," adds Seddon.

Much of the change in relationship with FM is being driven by the movement towards well-being the workplace, says Ravi Bhatnagar, account director with FM service provider Anabas.

"In the past, we were reporting in to finance or procurement. It was all price-driven and not about the value that we could bring," he says. "Now we're more involved in bringing alive the telemanagement of a building and supporting HR.

"We were also taking buildings on well after the design stage, but we've just won a tender on a contract where the client's actually involving us six months prior to moving into their new building. This is the first time this has ever happened in my experience. Normally you get a month, if that, and then you end up with all these workarounds."

Change started to happen around the time of the financial crisis in 2008, when organisations wanted to cut costs regarding property and support services, according to Finbarr Murray, formerly a director of estates and facilities with the NHS and now managing director of 2gether Support Solutions.

"Prior to that, and certainly in the areas that I've worked in, it was perceived as a cash drain.

It was a big cost to carry and didn't pay back," says Murray. "But I've watched it go from being a glorified office support function to something that can be a very strategic component

In Murray's experience, more often than not the person commissioning a project in the first place is now the FM director.

"They are working hand in glove with the real estate or capital build teams. Their influencing skills are not just about service provision, but the commissioning of the project, the strategy and masterplanning that sits behind it," he says. "I'm seeing them making cases to the board, doing the financial analysis, and so on. That's a massive turnaround from when I first started."

But Murray admits receiving blanks looks when he tells people that he works in FM. As a sector it still doesn't have the sense of place and identity that finance or IT do, he says.

Simone Fenton-Jarvis, chief workplace officer with Twinkl Educational Publishing, agrees. "When I started at Twinkl, the CEO didn't even know what a facilities manager was, so I was called an operations manager. I was subsequently made a chief workplace officer, which allowed me to raise issues with finance and HR.

"However, HR still saw facilities as something that simply did health and safety tours during the staff on-boarding process. It was only when we started looking at the workplace as a whole that HR realised that we could improve engagement massively, both internally and externally, and support them as well."

We've probably still have a long way to go before FM becomes a cool and aspirational career choice. Talk to many in the sector and it's a job they seem to have fallen into in a roundabout way, which is probably a lot to do with the lack of recognised pathways into it.

Only in the past 10 to 15 years have universities started offering FM courses. However, slowly but surely it's being recognised for the vital function it performs on a personal, organisational and societal level. It's long overdue.

The following pages show practical implementations from FM function that have shifted perceptions of them from others in the organisation they serve. 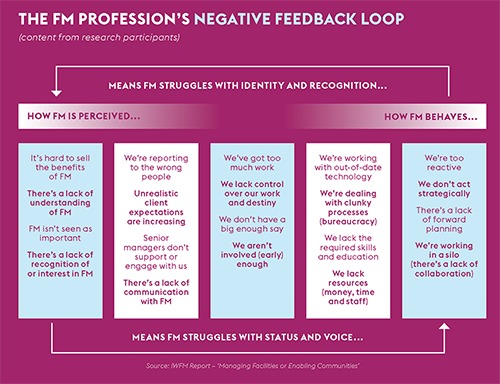 When FM starts to be seen as the go-to department to make things happen, you know you're moving in the right direction. According to senior facilities manager Ian Seddon, this is what has started happening at Manchester Metropolitan University. So what's happened to bring about this change in perception?

"It can be something as straightforward as window cleaning," explains Seddon. "Previously, there might have been cradles inside on a rack, but our experience shows that abseil boats are the preferred option. It's a simple thing, but when you start looking at the life cycle costs and functionality, it's suddenly acknowledged by others outside of FM as a big saving and a great idea."

The business school on the campus is also seven storeys high and to change the main lights in the atrium, Seddon says an internal vehicle was needed each time at a substantial cost so a number of lights were left to go out at a time.

"By doing this in tandem with other contracts, such as the window cleaners, we also made further substantial cost-savings. So we're become a sort of conduit between the customer and these services," he adds.

The FM team has also produced its own design guide that influences decisions for textures and paint on walls to choose more cleanable and durable options. At Edge Hill University, it was an overhaul of the post system that raised the profile of the FM department. Traditionally, students would either queue up at 6pm to collect their mail or it would be distributed to boxes within the residential buildings on site.

"With 2,700 students on campus, we began to question whether this was a good customer experience, as we very much look at students as customers," says Adrian McGillion, director of FM. "So we bought in a product that tracked the mail and notified students when it arrived on site," he says. "We also reconfigured our reception area and brought the mailroom from the back of the building to be more front-of-house, so students can now collect their mail any time they want."

The strategy successfully dealt with the 6,000 parcels delivered to the mailroom on Black Friday in November; students and staff were impressed. "It's now an expectation,' says McGillion. "After all, it's nothing more than these young people would expect in the real world."

The creation of service delivery coordinators is another initiative at Edge Hill that has engaged the facilities team with students and staff. The campus is split into three areas and a coordinator services each one.

"They are like a business partner in an HR context," explains McGillion. "They meet with departments, faculties and the building occupants on a day-to-day basis and feed that back to the FM team. It's something we've introduced in the last 12 months and have got an enormous amount of engagement from because people just want to be listened to." 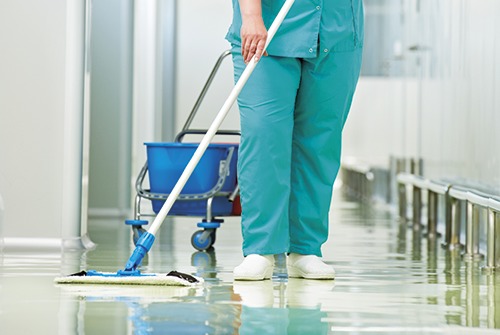 Finbarr Murray, managing director of 2gether Support Solutions, recalls the implementation of housekeepers while he was at the NHS.

"They are a conduit between the FM provider and the customer, effectively the patients," Murray says. "They act in a very holistic way to be the face of the service, but also the person that provides the human touch to the patient. It sounds old-fashioned to have housekeepers, but they have responsibility for the likes of food, cleaning and maintenance. It only cost us about half-a-million [pounds] to implement, but it made a massive difference to the facilities experience.

"The feedback was tremendous. These housekeepers know everybody by name and their individual needs, which meant the service also became more human."

The threefeatures and supporting graphics in this first Facilitate 'long form' feature section were driven by the publication - at the IWFM's launch event in November - of a report produced in association with workplace consultancy 3edges.

In 'Managing facilities or enabling communities - Embracing culture to move FM forward', report authors Ian Ellison and James Pinder argue that the sector appears trapped in a "negative feedback loop" involving a lack of recognition, voice, and resources. The profession, they said, needed to consider which aspects of its ingrained culture are worth keeping - and which needed leaving behind. There is a need 'to develop higher-order competencies beyond those represented in existing competency frameworks'.

The full report can be dowloaded from www.iwfm.org.uk/insight/research/culture-report

At Twinkl Educational Publishing, the FM team suggested a move to agile working to accommodate the varying needs of staff.

"Every time a scrum or project team changed in our production department, we would have to perform multiple seat moves, often for 50 or 60 people where we were physically unplugging people's PCs and lugging them about," says chief workplace officer Simone Fenton-Jarvis. "So we implemented agile and remote working, which has saved so much time. The response has been fantastic."

But small tweaks have also raised the profile of Twinkl's FM team, with customers and staff singing their praises. "The executive team have important visitors arriving all the time," explains Fenton-Jarvis. "Since facilities got involved with aspects of their hospitality, the executive team have told us the feedback has been superb and these visitors leave with a really good impression of the company.

"We provide the food, drinks, and supply Wi-Fi passwords before anyone has even asked. It's these small touches that have made all the difference."

With a company culture that is approachable and friendly, Fenton-Jarvis explains that it's all about making sure people know FM is there to do whatever needs doing. "The feedback we get is that we go massively above and beyond," she says. "With facilities, people generally don't know you're there unless something breaks. I set my team the task of making sure that people know we're there, but without anything breaking."