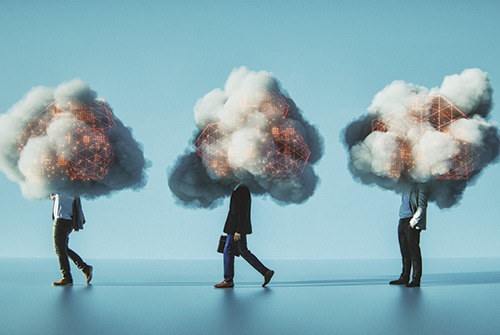 A discreet light-tracking device, powered by Bluetooth, is tacked to your shirt lapel to monitor how much daylight you need compared with what you're getting. The data is captured in an app and reveals your personal 'light diet', informing you of the moments in the day when you're best performing, whether you should sit next to a window - and at what point artificial light is negatively affecting you.

The value of this employee data is significant. It can guide lighting decisions to optimise workplace performance, inform design choices and even help to determine the very building they require.

And beyond light, there's air; indoor air quality has shot up the agenda of late. Georgia Elliott-Smith, director at sustainability consultancy Element 4 Group, foresees the use of a wearable or small device kept at an employees' workstation that flashes red when air quality dips to unhealthy levels. This will potentially have legal and insurance risks, she says, forcing employers to be more aware of the environment they provide for their workers.

Technology often provides a new means to perform an old task. In the 1800s, time and motion studies were used to identify efficiency improvements in workers. Today, all that technology really does is allow a new form of 'observer with clipboard' recording, with wearable sensors capturing what is essentially similar data, says Simon Jones, technical director HSE at health and safety consultancy Alcumus.

Any vestiges of that clipboard are likely to vanish as 75 million wearable devices are predicted in the workplace by 2020, according to a 2016 report by PwC. Furthermore, about two million employees can expect to wear health and fitness tracking devices as a condition of employment.

Workplace health checks are already routinely made in many industries, especially when the worker drives or operates machinery. Jones refers to the 1974 Health and Safety at Work Act, which requires employers to safeguard the welfare and health and safety of employees and, in turn, employees to cooperate as far as necessary.

"Where the requirement for wearables is linked to the legal requirements above and in other H&S legislation, or is already part of the contract of employment, then failure to cooperate with the employer may constitute a breach of contract or breach of criminal law, both of which, of course, could be dealt with under employment law and by utilising the employers' own internal procedures," Jones explains.

Extending the data input to include employees' heart rate and blood pressure is not a far grab from what is already required by the Health and Safety at Work Act, adds Jones. And employees could well encourage that, as 61 per cent of respondents to the PwC survey wish their employers to play an active part in their health.

Despite all of the above, 38 per cent of respondents to the same PwC survey did not trust their employers to use their data for their benefit.

"Trust is really important," says Elliott-Smith, "and the biggest thing has got to be educating the users about what the data is for, who has access to it, why it's being done and setting the boundaries around it.

"When any benefit is given by an employer, there are automatically going to be suspicions from employees about why they want to know or who is going to see it and if it is going to impact them negatively."

Medhurst says that "there is a genuine concern that we are gathering too much data" in what can feel to some like the "Big Brother concept", noting his surprise that the younger generations showed the biggest resistance. He adds that 98 per cent of all data has been collected in the past two years. "But how much data do we truly need? Why do you actually need it? Start to challenge why," he advises.

It is a mistake for any company to conceal the real use of wearables in a well-being package or not to communicate why data is being tracked. "It would be much better to be upfront and candid with people and share why they're looking to gather the data," Angela Love, director of Active Workplace Solutions, explains. "Most people understand and appreciate that businesses want to be more productive and, if well-being is a benefit for an individual, the two can sit alongside each other quite well."

Finding balance between the needs of employers and employees is already an issue, with smartphones blurring the work-life boundaries - especially when the employer supplies the phone. There is an implicit understanding that, within reason, the employee is contactable, says Chris Carr, senior workplace consultant at Space Solutions. Wearable technologies could just be the next step from that logic, he adds, offering the caveat: "Technology on its own will not be the solution. There have to be protocols that underpin technology."

And being sceptical of employers' motives is necessary. Data in the "wrong hands without the right checks and balances" can be used for "nefarious reasons", says Gary Codling, performance director at Vinci Facilities. "We need healthy cynics and people holding others to account when they are not following the rules

On an organisational level, enforced policies should guarantee ethical behaviour. Doing so will reap the significant benefits for the employee such as "a more streamlined and satisfying job", adds Codling.

The problem with aggregated data is that it requires a minimum threshold of participants to ensure that it remains anonymous. "As soon as you get below two people then that's when the sixth sense becomes irrelevant because, if you're the last person in the building, they can tell exactly what you're doing," says Carr.

For wellness projects, Elliott-Smith says employers will need a minimum of 20 employees for anonymous data, which can then be used for averages to determine trouble areas such as poor sleep or fitness, misuse of alcohol or high stress levels.

"The idea is not to spy on people but take the temperature of the workforce and find out the real problems instead of chucking money at things across the board and hoping some of it sticks; let's be more focused to see what people are struggling with," she adds.

Rolling out wearables should happen in phases, Elliott-Smith advises: "The first people to engage are likely going to be those that are pretty active and aware of their health, probably already going to the gym or focused on healthy eating."

Others tend to follow once they see the scheme mature and receive feedback from participating colleagues.

Participation shouldn't be compulsory because some will not want to engage.

With well-being projects, data privacy is often not the main concern; rather, it is people's reluctance to interact with the reality of an unhealthy lifestyle. "It's going to tell them something they don't really want to face up to, so if they're not ready for it we can't force them to do it," she adds.

Another cause for non-engagement is that some believe they already know what their issues are. But the reality is few - usually only fit and healthy people with a good understanding of mindfulness - manage to align self-perceptions with hard data. "We don't often open up the hood to see what's going on in ourselves on a moment-to-moment, day-to-day, week-to-week, year-to-year basis," says Tim Wright, the UK commercial director for Firstbeat.

Wright explains that data can reveal excessive stress, poor sleep and insufficient or inefficient exercise, but it's the coaching that brings the data to life, catalysing behaviour change by setting goals for employees and implementing strategic well-being plans for the company based on the aggregated anonymous group data.

People want to live healthier and less stressful lives. If technology enables that, then positives are to be gained. Indeed, as this focus on health intensifies, more people will expect assistance from employers. Perhaps not through a formal employment contract, says Codling, but possibly a social one: "you keep us healthy; we'll do