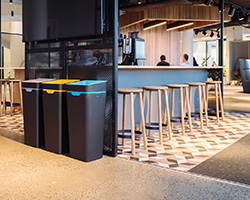 Method have redesigned recycling and waste bins for the modern facility. Their award-winning bins are helping leading facilities around the world to recycle more and waste less, while saving time and money. Their bins are featured in the Sydney Cricket Ground, Foster + Partners, the Office Group and many more.

Method have transformed recycling for the modern facility. The good-looking bins are placed together to form flexible recycling stations that are positioned throughout the open-plan design of modern spaces. With these communal recycling stations, Method has saved organisations around the world time and money - while they recycle more and waste less.

Recycling and waste bins have often been an afterthought when designing a space, hiding them in cupboards or under desks. They are ineffective and often encourage users to place all of their waste into a bin that ends up in landfill or incinerated.

Method co-founders Steven and India Korner began Method when they continuously saw organisations who wanted to recycle without the tools to be successful. They believed a well-designed bin could change the way people interact with recycling and waste in the workplace, and it has. One organisation reduced general waste from 70% to 30% with the introduction of Method bins.

Three years of research and design went into the development of Method's 60L Recycling Bin, optimally sized for open plan spaces. The Korners held focus groups, consulted professionals and even worked the night shift with cleaners. All of this was important to create a system that is well rounded and benefits all those involved in the waste and recycling process of a facility.

For facility managers, the Method system provides you with the results you need in your role. The communal recycling stations reduce the number of bins and liners that need to be purchased and serviced. This reduces the cost of waste management substantially over the course of a year. As well as the lowered costs of disposal as you recycle more, and waste less. Further, the visible recycling stations become a statement of your organisation's commitment to recycling and sustainability.

The system is flexible and able to adapt to the unique requirements of a variety of facilities, you can easily introduce new bins and streams as you need. Method recommends one recycling station per 30-50 employees (no more than a 10-second walk away), however, single bins can be placed where recyclables are produced to further increase recycling rates. Such as an organics bin in the kitchen or a paper bin next to the printer.

The bins are now a part of the furniture in leading and innovative facilities around the world including the Sydney Cricket Ground, Qantas, The Office Group's coworking spaces and Foster + Partners in London.

Design giant Canva needed a recycling solution that was easy to implement, use and maintain that also complimented their aesthetic. They are constantly working to be one of the most sustainable offices in the world and needed superior results.

"Method's beautiful bins allow the sometimes daunting task of having four recycling and waste options to be manageable across our ever-expanding offices".

Method have also engineered specialised accessories to complete the system. Precyclers are temporary desktop waste storage that encourages users to separate waste at the desk before transferring it to a communal station. They are a particularly useful tool in the transition away from desk bins.

Method's Heavy Duty Connectors seamlessly lock the bins in place side-to-side, to a wall, or back-to-back. This means that cleaners don't need to move the bins back into place, especially in high-traffic areas.

Come and meet the Method team at the London Facilities Show at ExCel in June to find out how Method can help you to optimise the waste and recycling in your facility. Find out more here.