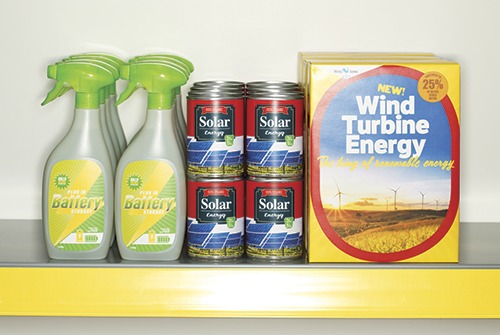 An increasing number of large retailers, retail parks and shopping centres are investing in on-site power generation and energy storage to enhance the customer's retail experience.

A survey of over a thousand businesses by Centrica Business Solutions reveals that 77 per cent of UK and Irish businesses expect to be producing a quarter of their electricity needs on-site by 2025.

Nonetheless, there is still a long way to go to close the gap between ambition and action. While 29 per cent of businesses have a formal energy strategy, far fewer back this up with specific targets or budgets.

The ever-rising cost of grid electricity has seen the potential for on-site power generation and energy storage gain acceptance by energy-intensive retailers.

The average energy consumption of shopping centres is about 300 kWh per square metre. According to the Financial Times [itals] February 2018, UK electricity costs are a third higher than in Europe, partly because of the oligopoly of six major utilities but also because Europe's markets benefit from better interconnections, cross-border trading and long-term supply contracts.

In addition, the past decade has seen a rise in wholesale energy costs as well as legacy costs (the transmission, distribution and policy costs of subsidising renewable energy), which now account for 20 per cent of power bills.

By contrast, the costs of purchasing, installing and operating on-site generation and/or energy storage have declined over the same time period.

According to International Monetary Fund figures, the price of solar panels and turbines has fallen by 76 per cent and 34 per cent respectively, making renewable energy competitive with fossil fuels as well as with hydropower and nuclear.

And battery storage technology is continuing to come down in price. Lazard's levelised cost analysis predicts that the capital cost of lithium-ion battery-based storage will have fallen by 36 per cent between 2017 and 2021. These stark cost declines have increased the attraction of on-site renewable energy generation.

Scott Barrows, managing director of Eden Sustainable - the solar partner of AMP Clean Energy - affirms that "a large retail park, shopping centre or distribution centre could provide a roof space of around 1,000 square metres for a solar power plant of 125 kilowatts peak (kWp), which could provide annual savings of £7,000 and £390,000 over 25 years. When you increase this to a major roof space of 20,000 sq m, a solar power plant of 2,500 kWp could provide annual savings of £140,000 and a huge £7.8m over 25 years."

In fact, according to the Carbon Trust, a 20 per cent reduction in energy costs could translate into a 5 per cent increase in sales.

In addition to saving money, on-site generation promises a new source of

revenue because surplus energy can be sold to district heating schemes, the National Grid or e-motorists.

In fact, under the UK's Smart Hubs demonstrator project, it is expected that car drivers will be able to shelter their vehicles under solar panels while having their vehicles charged directly from said panels, or by battery storage, as they shop.

The wider benefit to on-site heat and power generation by the retail sector is a political one; renewable energy retailing can make a significant contribution towards the UK's Paris agreement targets and reduce reliance on the National Grid, especially when supplies are tight or during peak times when prices are higher.

At the same time, self-generation protects against ever-higher electricity bills, power outages and increases business's environmental credentials to an increasingly aware and concerned customer base.

Indeed, according to consumer research conducted last year by Danish power company Ørsted, 73 per cent of consumers would like retailers to be 100 per cent sustainable. Given the climate agenda, self-generation using sustainable resources allows retailers and facilities to future-proof themselves against increasingly stringent environmental regulations and legislation.

Landsec, owner of the White Rose shopping centre in Leeds, employed EvoEnergy to install a 2,902-panel solar array, which in a single year from August 2017 generated 680 megawatt (MWh) and reduced carbon emissions by 250 tonnes, equal to more than 500,000 miles of car emissions. A single 250-watt solar panel costs between £400 and £500, making the cost estimate for this installation around £1,160,800. Landsec sells its surplus power to the grid and foresees that expected advances in battery technology "could soon see retail sites generating and storing enough energy in the summer months to service much of their energy needs throughout the rest of the year".

Sainsbury's has partnered with British Gas in a £15 million project to install geothermal technology to regulate cooling and heating. Stores in Godalming, Wolverhampton, Leicester and Reading have already received this technology with those in Ellesmere Port, Monks Cross, Thanet, Redditch and Newbury next up. By 2020 at least 20 large stores will have operational heat pumps. The British Gas Business Services energy performance team installed and maintain the ground-source heat pumps.

To counteract the growth of e-commerce, future footfall in shopping centres will increasingly rely on the quality of the environment, meaning highly efficient climate-control and lighting systems. But the battle to get consumers on-site is also leading to a wider change in the nature and type of retail space.

All types of retail space operators, from shopping centres, retail parks and retail zones in stations, airport, ferries and cruise ships, are installing wider service offering from cafés and restaurants through to gyms, hairdressers and barbers as well as entertainment offerings such as cinemas and escape rooms.

Forget the quick, purposeful shop; this variety of attractions is aimed at keeping consumers on site for longer. But from an energy consumption perspective, retailers face a difficult balancing act. Offering so many diverse shopping experiences can increase revenues - at the expense of increased energy use.

The EU's CommONEnergy project might offer a solution here. The scheme is targeted at reducing existing retail centres' energy use by as much as 75 per cent through the retrofitting of technologies that can cover their costs in just seven years.

Retail members of the scheme include the Mercado del Val covered market, which opened in 1882 in Valladolid, Spain, the CitySyd mall in Trondheim, Norway, which opened  in 1987, and the 1970s era Modena Canaletto shopping centre in Modena, Italy.

To achieve CommONEnergy targets, establishments - principally shopping centres - undergo deep retrofits of  their internal and external architecture, as well as their heating, lighting and cooling systems. Examples of innovations include installation of multi-functional climate-adaptive façade systems, applications of multipurpose coatings and insulation, and the use of vegetation strategically placed to reduce heating and cooling demand.

A smarter approach to HVAC

Higher summer temperatures and rising energy costs are inducing designers and operators of retail space to question the need for artificial, high-emitting, air-conditioning. Operators are looking at natural or passive approaches to cooling, including the encouragement of natural cross-ventilation, the use of reflective blinds and surfaces, and the planting of trees to shade buildings.

Lighting has always been a significant cost for retailers, and newly matured technologies are now having an effect. Retrofitting LED lighting and installing lighting systems controls that automatically adjust to meet specific functional needs, allow daylight dimming or real-time natural illumination to adjust mood, are making a significant contribution.

As senior research scientist Matthias Haase at Norwegian research consultant SINTEF points out: "Clothing and foodstuffs should not be exposed to direct sunlight. This is why replacing lighting in communal areas should be different from retail spaces and should be regulated in terms of light intensity and colour throughout the day."

A case in point is the CitySyd mall, in which the lighting systems were changed to raise the level of natural light by installing more windows, new skylights and light tubes and electrical fixtures replaced with smarter solutions with ambient effects for different uses.

The revolution to come

A full refit with IT platform and building-monitoring networks integrated into intelligent building energy management system will integrate all energy using and energy supplying systems to work in harmony, cutting energy use while enhancing comfort and visual features for both workers and customers.

Recent experience of retrofitting has brought new knowledge to guide the planning, installing and overseeing the installation of high-tech energy management systems.

As the era of new-build shopping malls in cities and out-of-town places ends, restyling and retrofitting existing retail centres will be the retailer's challenge in the years to come.