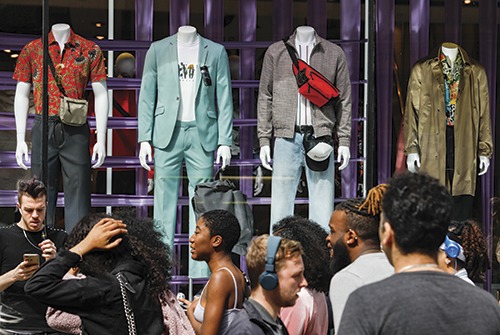 As facilities management professionals' roles evolve to take on more operational duties in the retail space, Bradford Keen investigates if they will have the necessary skills.

Imagine you're a retailer that sells clothing and homeware but, during stocktake, your radio-frequency identification (RFID) device tells you that you've got 20,000 footballs on-site. The error? Radio frequency interference from JD Sports next door.

RFID technology relies on a tag, equipped with an antenna that emits radio frequencies, being attached to individual products or boxes of items. An RFID device reads the tag and informs retailers quickly and accurately - most of the time - of how much stock they have on-site.

But the small problem of RFID interference sometimes happens when radio frequencies travel through the walls of neighbouring retail outlets. The solution to this type of problem is not complex, says Steve Roots, senior FM at Matalan and outgoing IWFM chairman.

First, check the device and codes themselves. If these are right, FMs might need to install shielding walls or curtains. "They aren't big structures but we integrate them into the building fabric to ensure we don't get interference," Roots explains.

Technology is a useful starting point when talking about FM in retail as the increase in online shopping has driven retailers to reconsider the physical space to deliver an enhanced customer experience.

Over the past decade, Roots says retail parks and shopping centres have been "trying to redefine themselves as destination venues" at which retail is just one aspect of a broader leisure experience replete with food and entertainment.

But when a retail outlet is not part of a shopping centre or retail park, achieving destination status is even tougher. The oft-lamented decline of the high street highlights the challenge. Matalan is one of few businesses opening new stores on the high street and in shopping centres, Roots says. "It's about picking the right location," he explains, making sure the local area offers leisure, food and entertainment to attract shoppers and enhance their experience.

The focus on customer experience has necessitated a shift in the FM function, says David Eden, facilities management director at Savills, which now has to "focus on the bigger picture rather than just the routine maintenance".

As a result, the skills required by FM teams in retail differ from those in a standard commercial FM setting, says Eden. "There is much more focus on the person and their experience in the retail sector rather than the traditional technical/H&S focus normally adopted when recruiting for an FM."

Retailers have high expectations, which has forced FM professionals to get better at understanding their clients' priorities, says Mark Rycraft, centre manager with JLL at Middleton Grange Shopping Centre in Hartlepool. This means delivering excellent customer service, being approachable and knowing a lot about the centre.

What  the sector needs, says Munish Datta, head of insight and membership at UK Green Buildings Council (UKGBC), who also has more than 20 years of experience in retail at Marks & Spencer, is a "greater fusion of skills".

Facilities have steadily become "multi-modal", he says, where boundaries blur between use and classification of building type.

This has put pressure on FMs. "You're seeing a bigger requirement to be appreciative of both hard and soft factors because they're blending in so much now compared with the past when you'd have a separate team looking at both."

Worryingly, Datta is uncertain whether current FM professionals are equipped to deliver soft and hard skills simultaneously, especially with customers demanding so much more in spaces being used differently.

"No longer is it a 9-5 society but a 24/7/365 society, which means the structure of the industry needs to respond in terms of how you resource that," says Datta. "It's no longer a day and night shift; it becomes a wholly different issue for FM operations."

But this always-on operation can cause a situation where energy consumption and waste generation is near constant. "We need to rely on better control and sensors to automate the way buildings are controlled, so you're not requiring your team to constantly monitor it and manually change it," says Datta.

Despite the pressures, there are opportunities for success. "If we get it right as a sector, we can serve the customer more efficiently and instantaneously, and with fewer SLAs," Datta adds.

The need for responsiveness

Providing efficient service requires FM teams be responsive. "The retail environment is very fluid and regimented site management is not the way to create a vibrant destination that enables customers to grow their business," Eden contends.

So FM teams have to be aware of retailers' fluctuating needs such as increased storage requirements or assistance with on-site or digital marketing initiatives, along with traffic management and resource planning during high-volume sales periods.

Rycraft says "trust is at the top of the tree" when it comes to building positive relationships between FM teams and retailers. He suggests a "daily dialogue" to understand retailers' issues and whether the FM team is meeting their expectations.

There's a lot of responsibility on the FM team as its successes, failures and responsiveness can result in retailers' profit or loss. Rycraft gives the example of a poorly maintained fire alarm system. Any unplanned evacuations as a result of a faulty system hits retailer profitability by driving out shoppers. "There's a financial impact on the business' profitability and it never gets recovered," he adds.

Ensuring that retailer profitability is the starting point for FMs and the best way to achieve this is by lowering operational costs. For example, Rycraft implemented smart meters for gas and electricity to monitor half-hour consumption patterns to determine how best to reduce use.

Rycraft contrasted the responsibilities of a centre manager and a traditional FM working in the retail sector. The latter tends to focus on delivery of hard and soft services while a centre manager will, among other tasks, assist retailers with merchandising. But he says the speed with which FMs' responsibilities are growing is likely to blur this distinction in future.

Retailers such as H&M and Primark have their own in-house merchandising experience, but others don't. So Rycraft mentors them in how best to merchandise their shop windows and also assists some of the stall traders in the market hall to build up their social media presence.

While Rycraft is responsible for providing FM services to multiple retailer clients, Roots' team is the retailer itself. This means that his team is built into the operations and planning of any branding exercises or new product launches. "We work with the visual merchandisers and design teams," he says. "They come to us with a concept, we put that concept into reality in respect of a new stand or area within the store and we will be responsible for designing, delivering and maintaining it moving forward."

Vacant units cost landlords money so FM teams can help to put this space to use.

"If you occupy vacant space for over six weeks and vacate that unit, you get a relief of three months in terms of rates payable," Rycraft explains, "so we look at ways to reduce those costs for landlords and our clients by utilising those spaces.

"We've built a hoarding across those units and retailers advertise on a 48-sheet-size hoarding billboard," Rycraft says. The cost to the landlord to install a billboard-size poster on a unit will be about £2,500 to £3,000. "If I can find a retailer to pay for that themselves and at the same time promote their own business then that makes sense and we have done that with about seven retailers so far," he adds.

When it comes to Christmas or other high-volume periods, stock requirements increase. This can lead to some retailers "double-stacking next to sprinkler systems" and blocking fire escapes with pallets of goods, so vacant units can also be used to store excess stock in preparation for these periods.

Seasonal demands will always place more pressure on facilities teams, but the general fluidity of the retail sector demands that they be quick to adapt. Far from being limited to delivering hard and soft services, FM professionals are increasingly needing to upskill to enhance a complete customer experience and guide retailers to maximise their space. They might even need to throw a few social media or merchandising tips into the mix.

Consumers have grown fierce about how waste should be reduced and managed by retailers and other organisations. Although facilities managers are bearing the brunt of this demand, they are reacting with speed and the net result can be positive for the profession. Bradford Keen speaks with Munish Datta about minimising waste and the untapped resource of landlords

Predictably, reducing plastic use dominates discussions about waste thanks, in part, to David Attenborough's Blue Planet and impending tighter legislation (March 2020) set to ban a number of single-use plastics.

Munish Datta, head of insight and membership at UK Green Buildings Council (UKGBC), who also has more than 20 years of experience in retail at Marks & Spencer, says FMs have been "on the frontline of the backlash" but the sector has already been "a champion of segregation and waste reduction for a long time". And it has responded "almost overnight" to "find new supply chains for non-plastic use".

"We should look at this development very positively and, firstly, applaud all those FM teams that have responded so quickly to a changing consumer mindset," says Datta, but also seize the opportunity to focus not only on ridding supply chains of single-use plastic but foster a zero-waste culture in organisations and be even better at segregation and selecting materials. The benefits will be environmental and commercial, he adds.

Datta points to the waste reduction achievements of big supermarket chains such as Waitrose with its store in Oxford that has elements of zero packaging or Morrison's getting rid of packaging in fruit and veg aisles.

Landlords could lead the way

Landlords of multi-tenanted retailers can also cut waste, says Datta. He notes from his time at Marks & Spencer that the organisation had clear zero-waste-to-landfill policies and discrete operations for waste streams. It appointed its own supply chain to deal with waste.

"We were doing that ourselves but it wasn't necessarily something that our neighbours in a retail park or others were doing to the same standards or to any standard and, actually, we didn't work a great deal with our landlords," he explains.

Tenants need to coordinate with other tenants through the landlord. "Whatever you may be saving from a waste point of view you are more than offsetting by the damage you're doing by the multiple vehicles coming in and out of retail parks,"

Landlords can set standards for all tenants to follow. This is happening, Datta explains, as landlords face greater scrutiny of waste generated in common areas but also of the total area footprint.

UKGBC works with Hamilton, Land Securities, British Land, Grosvenor and others to help to steer collective and coordinated energy and waste management among their tenants.

FM teams will be critical to the landlord's success. Their waste reduction initiatives matter, of course, but so too do the measurements and reports they produce, which will help to tailor the messages to all of the stakeholders.