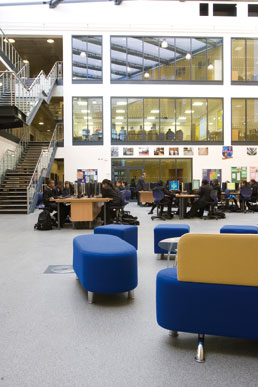 Hackney's award-winning Petchey Academy is attracting positive media coverage and bringing a sense of regeneration to a deprived borough. FM Alan Gilbert tells Louisa Roberts about the challenges involved in managing 1,200 students on site during the lunch hour and fitting furniture into triangular classrooms

The Petchey Academy in Hackney is just a few minutes walk from London's 'murder mile' - an area synonymous with gang warfare, gun crime and crack addiction. Until recently, the borough's education system suffered terribly from the effects of poor funding and a lack of commitment from teachers and management - many of whom spent just one or two years of their career dealing with the effects of poverty and crime on their students, before moving to live and teach in less challenging areas. Things are starting to turn around, albeit slowly. There is an increasing number of middle-class families moving into the area, attracted by the stock of large houses that are unaffordable in neighbouring Islington, as well as the improving transport infrastructure and education system.

The latter is a result of a raft of private investment in a series of new city academies that are slowly replacing the older, failing secondary schools. The Petchey Academy, partly-funded by east London entrepreneur Jack Petchey, is one of these. Since opening in September 2006 (its new building opened in September 2007), the school has created a media stir of a different kind, attracting coverage for its policy of keeping students on site during lunch and break times. The decision to keep students on site lies with the academy's specialism - health, care and medical sciences. This means that student wellbeing is of utmost importance, which means keeping them secure, safe on site, and well nourished.

So far, only years seven, eight and nine are at the school, as a new cohort joins each year until 2012 when 11-18 year olds will all be educated at the academy. "All students, except for sixth formers when they join, will be kept on site during break and lunch, because this is not a salubrious area with lots of green spaces. There are crackhouses and prostitutes nearby and besides that, there just isn't much to do around here," explains principal David Daniels.
"Keeping them on site means they aren't going to hang around outside chip shops, dropping litter and causing a nuisance. So this has encouraged a much better relationship between us and the local community."

Make a break for it

The benefits of such a policy for the students and community are clear. But from an operational perspective, it's hard to imagine how staff, including facilities manager Alan Gilbert, will cope with the challenges of 1,200 students on the 232,717 sq ft site during breaks - there are currently 540 students there. But for now, they are coping well, and students are responding positively to the boundaries placed around them; in turn, parents are reacting to the excellent academic results (current year nines are predicted 70 per cent A*- C GCSE results) by placing more than 1,100 applications for 2008's 180 student places.

Constant meetings between the senior management team, led by Daniels, and architects Aedas Partnership and construction firm Norwest Holst led to what appears to be a practical and intuitive design. A multi-storey atrium provides a light and airy entrance to the academy, while the circular walled space in the middle of the atrium coupled with raised walkways mean that just four adults can watch the whole school community at one time. "There is one corridor which isn't covered," explains Daniels, "but we are backed up by the CCTV system, so bullying is minimal."

"There is a swipe card system for children so we can track who has opened a door - who was in a certain corridor at a certain time. This might not be foolproof and we may not get the exact child if an incident has occurred, but we'll certainly get someone they know, which will narrow things down somewhat," Daniels says.

Gilbert, who oversees the academy's FM, including the building management system, maintenance, security and cleaning, works with one assistant FM - an ex-media locations manager and, coincidently, Gilbert's brother, six cleaners, including one daytime cleaner, and two security guards. As student levels are relatively low at the moment, staffing and funding levels are pitched accordingly, but Gilbert says he would like a porter and some extra admin help in the future. Having joined in November 2007, he is currently in the process of buying in and installing a new FM helpdesk.

In addition, the high glass atrium, onto which backs several classrooms, had to be rethought slightly, as anyone standing on ground level could look straight up the skirts of female teachers working in the higher classrooms. "We had to change the design slightly there," he admits.


Security is high, with swipe-card triggered doors and 35 cameras keeping intruders out, and students on site during school hours. But one design feature that is less than ideal in terms of security, says Gilbert, is the fact that the car park and therefore the outside world can be accessed from the playground.

This is one of a list of potential problems when viewed from an FM professional's perspective. Others include the large volume of glass walls and doors (Gilbert's cleaners are not fans of wiping off hundreds of finger marks on a regular basis); the odd shapes of some of the classrooms (the triangular classrooms can be difficult to fit furniture into); some windows can't be opened; and some of the original equipment specs are not the best value for money. All of which supports the argument of including a facilities manager at the design consultation and build stage, and Gilbert regrets not starting at the academy six months sooner than he did.

The job is a tough challenge, Gilbert says, with a lot to get used to in a short space of time, but he admits that the academy is a "brilliant" place to work. Despite the inevitable snagging problems, the building has for the most part been intelligently designed: concrete ceilings keep rooms cool or heated when appropriate, while the building management system is triggered by a weather station situated on the roof, along with all of the air handling units which are kept out of the way there.

When fire alarms go off (a regular hazard in any school), smoke vents open and windows close, while the car park gates open automatically. The technology, reiterates Gilbert, is state of the art and incredibly precise. The opaque roof over the atrium is made from ethylene tetrafluoroethylene, or ETFE, the fluorocarbon-based polymer best known for its use in the Eden Project's biodomes. The benefits include its high corrosive resistance and its strength over a wide temperature range.

The academy's outside space is something Gilbert is particularly proud of, as he oversaw the landscaping of the play area. "I wanted to get away from the look of a traditional playground, as there isn't much green space around here," he explains. "This isn't just a school, it must also contain beauty," he continues. "We also wanted to make the area 'girl-friendly', so there are lots of places to sit down - one thing we didn't want to scrimp on was the design and quality of the outside benches. There are areas where no running is allowed, although there are dedicated ball game areas, for those who need to run off energy."

The outside area is very low maintenance, a result of the academy's policy of disallowing any food on site, apart from water or fruit. There are no vending machines, so the students have no opportunity to eat junk food throughout the day. The students have one choice of meal a day (in addition to a vegetarian alternative, plus five religious and cultural variations). These are cooked by the two in-house chefs, one of whom is an acquaintance of Jamie Oliver's. Everyone sits together in mixed age groups on tables of six or eight, with one teacher, to eat. This way, Daniels explains, students are encouraged to develop social graces and the art of conversation.

The leadership team says it has high hopes for the academy's role within the community. And, as Daniels explains, it is situated just a mile or two from the City of London, and he wants his students vying for the best jobs there in the future.

As for Gilbert, his BIFM qualification coupled with his educational background, first teaching construction at, then managing the facilities of, Redbridge Further Education College in Essex, means that he is used to the lively atmosphere of a school. He says that he would like his future to include managing facilities for sports stadia.

In the meantime, Gilbert and his brother, dubbed The Krays at work (purely for the fact they are brothers, and not as a reflection of their facilities management style) continue to cope with the FM challenges of managing a building which houses hundreds of teenagers, while also being hired out for conferences, evening events and even weddings outside school hours. Wembley could be a breeze after this.