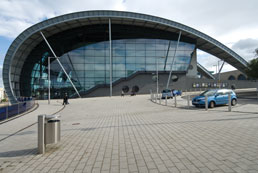 The Sage Gateshead is a spectacular addition to Tyneside's cultural landscape and, as building services director Stephen Little tells ?Cathy Hayward, the music venue's innovative design is in tune with the needs of staff and visitors alike

It's been likened to an armadillo, a giant slug, a shell and a wave. But building services director Stephen Little says that whatever people's view of the £70 million Sage Gateshead, which opened in December 2004, the silver curves of the music centre have played a major role in regenerating that part ?of Gateshead.

The Sage Gateshead which perches gracefully on the banks of the Tyne, next to the Baltic contemporary arts centre and the architecturally stunning Millennium Bridge, is Norman Foster's first building for the performing arts, but it echoes his other famous projects: London's Gherkin and the City Hall.

The circular theme is repeated, not just with the deco-style curving staircases, but in the sense of space and flow of people and air around the building. Wrapping around the front and sides is a spectacular glazed concourse, which includes a 200m coloured glass balustrade, allowing spectacular views across the Tyne. Like the Gherkin, the floor plates don't meet the edge of the glass, enabling air flow between the basement and concourse floors and allowing music to drift from the Music Education Centre in the basement to people sitting in the Sir Michael Straker café at ground level. "There's no piped music in the Sage Gateshead", insists Little. "We have enough of the genuine stuff going on."

The site holds weddings, conferences (it has held one for the Labour Party) and other events, but is primarily a music venue hosting everyone from Bryan Ferry and James Blunt to its own orchestra, Northern Sinfonia.

The 26-room Music Education Centre focuses on teaching, practice, workshops and recording, while the Gregg's Children's Room helps to introduce music to children up to seven years old. Unlike many of Foster's other famous buildings, it is open to the general public, with the concourse's bustling crowds reminiscent of a major railway station or airport terminal.


The building was designed from the inside out, with the three main halls - the 1,700-seater Hall One, the more intimate Hall Two, a decahedron which seats 400, and the Northern Rock Foundation Hall, used for rehearsals and some performances - built as separate structures which don't touch. The iconic canopy, which appears to be shrink-wrapped around the structure, doesn't actually touch the inner buildings. This, together with specially designed concrete with a high capacity of air, provides an acoustic gap between the halls - which visitors can see as an inch gap filled with rubber - allowing all three areas to hold events at the same time without vibrations disturbing other performances. And it means that visitors can stand outside the Northern Rock Foundation Hall and watch a full orchestra rehearse and not be able to hear a thing. ?"We are one of the top three buildings in the world acoustically", Little boasts.

Naturally such an unusual design presents practical challenges for the FM team led by Little. The roof, which reflects the sky and the Tyne and is never the same colour from one day to the next, is made of stainless steel and glass and is cleaned twice a year using deionised water. The windows are cleaned once a month, again using deionised water, and the internal windows every other month. Window cleaners are lowered from the top of the roof on ropes. "Window cleaning was one of the most difficult contracts to procure because of the nature of the building," says Little. Rain hits the roof and then drips through onto the plastic membrane (the real roof) which is a metre beneath what the public see. The water then pours down into holding tanks and into the Tyne.

The FM team initially had problems with the lack of humidity in the auditoriums which was causing artists to cough. Humidifiers were installed in 2006 which keep the areas at around 40 per cent humidity throughout the winter. Meanwhile, each seat in Hall One has its own Hvac system which pumps air from underneath.

The seven-man cleaning team, provided by Gateshead Council, which manages contracts with other public sector buildings in the area, works from 5am until 11pm supporting the events. "The cleaning contract was one of the most important for me," says Little. "You can put on an amazing event and people come out buzzing but if then they go to the loos and they're dirty or messy, then that can spoil the whole experience."

They have a tough task on their hands as the building's colour scheme - black, white and grey - is not the easiest to keep clean. When FM World visited there were plenty of 'wet paint' signs - evidence of the constant 'touching up'. Initially the plan was not to have a security team and simply "lock the building up at night".

But Little, who joined the organisation as head of building services a year before it opened in December 2004, argued that a building of that size and prominence would need a 24/7 security presence.

"We didn't know whether to expect vandalism or not, but in fact the local people have very much taken the building to their heart and the initial nine-man security team has been reduced to six. The security team performs a variety of roles including welcoming artists at the stage door, talking to visitors about the building and supervising crews out after sets have been taken down. They are also in charge of emergency evacuations (staged evacuations are used instead of a sprinkler system). It takes around seven minutes to evacuate the whole site.

Despite joining a year in advance of opening, Little had no input into the design process and had to book appointments "days in advance" to visit the building. "We sat in the Old Town Hall and watched it go up," he says.

A Sunderland fan working in a landmark Newcastle building and a former referee, Little is used to a bit of friendly rivalry. He took over the site the day the contractors moved out (about a week before it opened) and says that it would have been beneficial to have more input into the design process from a maintenance perspective and also to have more of a handover. "The builders left everything switched on and so it took us a while to get to know the building and the systems and to reduce our energy and water usage. It was a steep learning curve."

The five-man facilities team is still learning and looking at ways to become more energy efficient, especially as the building's electricity usage has gone from £15,000 a month last year to £22,000 a month this year, thanks to the hike in energy prices.

Two years ago, Little organised a free energy survey with the Carbon Trust, and more recently commissioned an energy management audit with Satchwells, which identified small changes, such as tweaking the plant and reducing temperature, that could improve efficiency and reduce costs. "The problem is that we can't benchmark as we're a unique building, not just a music venue but an educational establishment open 24/7".

Although there is underfloor heating, which warms the first 10ft of the concourse, it is rarely used because solar gain is so high.


Little's team typically works a 8am-5pm shift, with one team member doing 2pm-10pm to cover the shows and to be on call. They work closely with the technical services team which manages the shows and supervises the roadies.

What sets the Sage apart from Foster's other buildings is that it's completely open to the public: people can even view the auditorium for free and sit in on rehearsals. This has meant that the entire building is accessible to wheelchair users; and wheelchairs and accessibility scooters are available for use. There are ample spaces for wheelchair seats in all of the auditoriums and performing spaces, and there are four lifts giving flat level access to all spaces.

Raised bumps on the stair handrails help visually impaired people find their way round the building safely. A hearing loop system operates in the ticket offices, cloakroom, bars and café and an infra-red Sennheiser system in the three halls enables hearing-impaired people to listen to concerts via a special receiver. The site has won several awards for its accessibility, particularly for its disabled toilets, several of which have changing facilities for disabled adults. And the access-all-areas policy is good news for the artists as one level back stage makes access to all three performing spaces much easier.

Little is an electrician by training, who became a sales engineer for an FM firm before moving into full FM in the health sector. He then went to work for BP Energy before it was swallowed up by Elior. It's not just the scale of the building or it's landmark status that excites Little. "For a former engineer to be working in such a diverse building is just brilliant. I'm not sure you could top it."