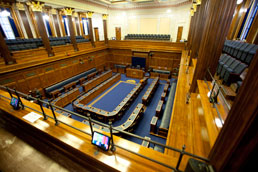 The Northern Ireland Assembly building is set for change and improvement - and that includes modernising FM operations at the historic Stormont Estate. Cathy Hayward talks to the site's director of properties Stephen Welch

Keeper of the house is rather an apt job title for an FM. So it's a shame that the Northern Ireland Assembly has abandoned formal designations and bestowed the title 'director of properties' on Stephen Welch who joined the organisation six months ago. The change in titular policy is indicative of a wider transformation taking place at the assembly which saw the restoration of devolved government in May 2007. "There is a real determination to make it work this time, and that includes taking a more professional and targeted approach to the estates function," says Welch, who previously spent five years as head of estates services at Queen's University, Belfast.

Welch, one of four directors recently recruited to the Secretariat Management Group, is conducting an audit to assess to what extent the FM function and Parliament Buildings support members in their parliamentary business.

The questions he wants answers to are: Is staff accommodation appropriate and sufficient? Are the committee rooms fit for purpose and do they adequately grant access to the public and media? And does the building engage with the public - is there sufficient accommodation to service their needs?


"The team might have had an expectation of me coming in with a massive broom and changing things", he says. "There was evolution here prior to my arrival but there is certainly room to take this to the next level. There's a whole change process happening here and modernising the FM is just part of that."

Welch has recruited space planners to assess how the assembly and its staff currently use the building. "Phase one is about pulling the data together on how we occupy the building. Who's occupying which rooms? Is there any space free? Phase two will look at optimising the space internally and maximising the use of the building to meet parliamentary objectives."

The audit is not just about looking at the space used, but about how the assembly conducts its business. There are opportunities to centralise business areas, says Welch. There are four directorates but staff for each of these areas are spread throughout the building and there is little centralisation. Centralising some functions could make more space available, he adds. "Nothing is sacrosanct," insists Welch. "The director general is moving into an area traditionally used by the secretaries which demonstrates that it's not about office size but about the best possible use of space."

Welch and his team will report progress from the initial stage of the audit in March. His gut feeling is that there is little spare space left in the building and that the accommodation availability and useage is not adequately meeting the needs of the 108 members of the legislative assembly (MLAs) - and particularly visitors' needs. But he is reluctant to talk about constructing a new building (something for which he would be responsible if it did happen) until the audit is completed and all the options have been explored.


Whatever happens in the long term, there is a need for additional accommodation during the  interim period. Welch is looking at rest of the Stormont Estate for potential solutions as well as spreading the net to a four-to-five mile radius of the assembly. The audit will also result in a change of staff. Many of the skeleton assembly staff, who managed the building while the province was under direct rule from London, were members of the civil service on long secondments. Over the next two years the separation between civil service and assembly staff will be made and Welch will recruit new FM specialists for his team.

Part of the challenge Welch faces is the nature of the building itself. A Grade B+ listed building, it is modular and many of the internal walls are load bearing making structural alterations difficult. There are few ceiling voids. It's immensely difficult and costly to maintain, explains Welch. "Introduce any new services and you're up against the problems of maintaining the fabric of the building."

Because of the demands of the modern assembly, the building's light wells have been eaten into by lifts, kitchen extensions to serve the catering facilities, and a plethora of building services.

But the business of the assembly also places great demands on the building and its FM function. The assembly is committed to encouraging the public to come and see their legislators at work. There are now 70,000 visitors a year, including 5,000 schoolchildren plus a host of events in the grounds including pop and classical concerts, sporting events such as the International Cross Country race and motor racing extravaganzas including the Northern Ireland Morris Minor Owners' Club and the World Bugatti Car Owners' Club.


"In the new assembly everyone is welcome but it's a balancing act. We can't have total security but we can aim for very good security," says head of security Billy Cassidy. The Police Service for Northern Ireland is a permanent part of the team at the assembly - their exact numbers depend on the daily business of the assembly (the house sits on Mondays and Tuesdays). They decide the threat level for the building based on intelligence.

Following the November 2006 incident when Michael Stone tried to gain access to the building (and two security staff were presented with awards in recognition of their courage and bravery), a review was conducted to look into security systems and physical security. Out of that came the layered approach where vehicles and people are searched in the grounds rather than the building.

The security team took over responsibility for the control room (previously in the hands of the Department for Finance and Personnel which runs the rest of the Stormont Estate) in March 2008 and is looking to upgrade the "antiquated security". The aim is to get the fire and security systems converged into one software package. Cassidy and Welch are also looking at security staffing - currently the majority of the 60 security personnel are agency staff doing a variety of jobs including staffed guarding, front of house, concierge, door keeping, chamber service, flag-raising, messengering and running a shuttle bus.


Catering is another high-profile and sensitive issue. There are numerous catering facilities at Parliament Buildings (all managed by Eurest since March 2007) ranging from the lavish and spectacular to the more relaxed. There is a members' dining room which provides fine dining opportunities for members during the day and holds events in the evening; a members' brasserie, a smaller area separate from, but adjoining, the main dining room where the menu is less expensive and exclusive and any member of staff with a permanent pass can entertain guests; a small private dining room for VIP lunches and dinners; a coffee lounge and members' bar; a press bar; and a basement restaurant, which is open to everyone and was refurbished over the summer. "There is more craic in the basement restaurant than in the dining room as it's used by press, staff and members," says Welch.

In addition, the Long Gallery is used for member-sponsored receptions, awards ceremonies, presentations and charity events, with around 250,000 people attending events at Parliament Buildings every year.

The first cleaning shift is from 5.15am until 8.15am and the cleaning manager will be in the building until 11.15am with an additional evening cleaning service. "This is a high maintenance building - high ceilings make for difficult cleaning but members expect the highest standards," says head of soft services Pat Neeson. Replacing bulbs and dusting the five chandeliers in the Great Hall was a major challenge. "It rarely happened and dust was a major problem," she says. Following the extensive restoration after the 1995 fire, the opportunity was taken to modernise the 1920s building  and the chandeliers were taken down, sent to London for checking and then reinstated attached to electrical hoists. They can now be regularly dusted and the bulbs replaced - usually every six months and before special visits. Deep cleaning is planned for recess periods, about six to 12 months in advance. Eurest direct delivers the cleaning following a problem with its sub-contractor.

Things can only get better


Last summer several enhancements were made to the chamber including changing the colour of the carpet to a darker blue, introducing digital a/v (which is future-proofed to allow for electronic voting should that be introduced), providing improved wheelchair accessibility to the public galleries and installing small desks for the backbenchers - at a cost of £285,000.

This project follows a £22 million restoration plan between 1995 and 1998 after a fire, allegedly caused by an electrical fault, completely destroyed the assembly chamber and smoke damage affected other parts of the building. The chamber was faithfully restored (and two extra viewing galleries, bringing the total to four, installed) and the decision was taken to upgrade the entire building. But again there is a balance to be met. "We see the positive spin-off for staff, members and the public, but the press just see us spending money on carpets," says Welch.

The press and public's attention is often directed to the FM function, with Welch and his team required to answer questions in the chamber about anything from the number of loo rolls used in the assembly to questions about recycling targets and security costs. It keeps us firmly focused on the bottom line, says Welch. "Parliament Buildings is set for change and improvement", he concludes. "That's not to say things are bad, but we can do things better."

A HISTORY OF PARLIAMENT BUILDINGS


Designed in the Greek classical tradition, the building is made from Portland stone mounted on a granite base. From the front, the four rows of windows suggest the building has four storeys. But it actually has six - the four visible floors plus a basement which is home to a restaurant and a media suite, while at the top is an office block. The fourth floor is set back on all four sides so is not visible from outside at ground level . The lime trees on the mile-long Prince of Wales Avenue taper outwards to make the building appear larger than it is; while the window sizes get smaller as they move upwards to make the building seem further away.

The internal layout of Parliament Buildings reflects that of Westminster with a grand central meeting area, the Great Hall, with the Assembly Chamber and the Senate Chamber opposite one another, leading off from the Great Hall.

The Great Hall is the most richly furbished part of the building with plain cream Italian Travertine marble walls that contrast with the blue, red and gold artwork on the ceiling. This paint has not been re-touched since 1932 thanks to a special - and secret - waxing process. The symmetrical patterns on the cream, golden and walnut Italian marble floor are replicated on the ceiling directly above and there is a great play on symmetry throughout the building and grounds, both horizontally  and vertically.

The assembly chamber was designed for 52 MPs, with the seating layout in adversarial format - opposition on one side and the government party on the other. Today, Members of the Legislative Assembly sit in a modern, European-influenced, U-shape format. In contrast, the Senate chamber is an architectural time capsule, virtually all of it in its original 1932 state. The Senate ceased to exist with prorogation of the Northern Ireland Assembly in 1972.