Power at the tower 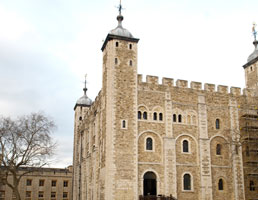 The Tower of London was prisoner to rising energy costs so the head of FM called in a qualified Hvac assessor. There followed a series of quick wins that sliced off a tidy amount from the king-sized bills

FM at the Tower of London has come a long way since William the Conqueror appointed the first constable in the 11th century. Geoffrey de Mandeville ran the Tower including building and moat maintenance and the payment of soldiers. He was also Keeper of the King's Animals because the Royal Menagerie was within the Tower. There was never a dull moment, seeing as the constable was also responsible for prisoners. It was serious stuff, as official records clearly show: "You are to guard them securely in the prison of our said Tower in such a way that you shall answer for them body for body ... Fail in no part of this on pain of forfeiture of life and limb and all property you hold in our realms."

Engagements are less fraught for de Mandeville's successors. Even so, Tony King, head of maintenance and facilities, has to keep his own head on his shoulders. The prisoners may be gone but there are still the crown jewels in King's care, not to mention the two million visitors annually who flood through the gates. King knows the Tower both intimately in its present configuration but also how it has changed over the years. On a walk through the grounds, he inevitably falls into his unofficial role as historian.

"The Duke of Wellington, who was also a constable, could be considered one of the first FM-minded managers of the Tower," explains King. "The Tower's moat has been dry since 1830 after he deemed it a health hazard and drained it."

As late as 1960 the Tower still housed Wellington's original barracks, Waterloo, with 1,500 residing or working within the Tower's walls. Today, across its numerous buildings, there remains only around 150 residents and 200 staff but in King's care are also countless treasures and antiquities.

Priceless exhibits including the Crown Jewels and regal costume require a constant temperature. Ensuring that plant keeps the building cool is of major importance and efficiency has a huge impact on energy bills. But King, who "arrived" at the Tower ten years ago, had a problem. "Plant was last refurbished just before I came here and it was probably installed 15 to 20 years before that. It would break down because there had been a certain neglect on the M&E side. If a chunk of the building falls off, I can cordon off the area. But if I have a heating or electrical failure, I usually have to shut the building down."

Attention to planned preventative maintenance led to an improvement but efficiency of plant was still an issue. As part of a package of initiatives to encourage and help commercial buildings to increase their energy efficiency, King determined to steal a march on incoming air conditioning legislation, bringing in an assessor in January 2008 - well ahead of the deadline. This gave plenty of time to put efficiency measures in place and even to reduce energy bills before a heavy tourist season.

"As a self-funding charity, we are affected by the rise in energy costs and we were aware that inspections of the air conditioning plant could make significant cost savings," said King.  "It's often thought that there is little to be done in terms of energy savings with older buildings, but we found that basic conservation measures can have a significant impact." The building gets its main heating from a range of boilers in the old hospital block basement. An underground constant temperature circuit leads to a header in a roof void where a constant temperature pump works for the air handling units (AHUs).

The roof void is a far cry from the darkened, respectful exhibit areas on the lower floors. Light filters in from several large windows to reveal AHU pipes and heating ducts, some only inches in diameter, others more than a foot across; all are now well lagged. King says that his M&E team had been operating what they thought was a well-proven preventative maintenance plan, so they would change the roof cavity air filters on a predetermined basis. "But we noticed that sometimes they were as black as they could get, and it was all because of recent building works nearby. So we should have changed the filters more frequently."

This is where the real value of an AC assessment comes in, he explains. Current assessment legislation is the minimum requirement. If you have a lot of plant under building management system control, then you would probably want equipment performance reviews more frequently. Also, have the assessor put the equipment under a more powerful microscope than legislation requires.

Darren Jones, the assessor from Efficient Air, did just that: "There is a requirement to look inside some of the air-handling units. But we went further and did pressure tests. We found that some of the filter medium coils were blocked, making the motor work harder, consume more energy and possibly in the short-term burn the engine out." It used to be a commonly held view that you would rewind motors in air handling units if you had an engine failure. Some research has suggested that a re-wound motor is around 6 to 8 per cent less efficient than when factory new. The newer energy efficient motors, rated Eff1, can typically save between 6 and 10 per cent energy over older types, says King. In effect, a rewound motor means you have a unit of up to 16 per cent less efficient that it's new replacement of similar specifications. Value for money for rewinding versus new has to be weighed up from this perspective, says King.

Waterloo's chilled water system was switched off for the winter so it was not possible for Efficient Air to assess efficiency. But the efficiency of the compressors, refrigeration units and cooling towers, around 25 to 30 years old, is not too bad, says King. New refrigeration systems using the latest inverter technologies generally have up to 15 per cent greater cooling capability and use only half the energy. But replacement rather than deep maintenance is being driven more by legislation on HCFCs.

The vast majority of quick wins in Efficient Air's report included cleaning or replacing filters and coils, mending broken door catches and the lagging of ductwork. One AHU needed a recalibration of a temperature sensor to stop the machine running at near full capacity. For the most part payback is set between two and eight months, certainly well within a year.

But estimates of savings are only that, says King. To turn the estimates into real cash, he urges FMs to improve their follow-up procedures. Check to make sure that staff complete their tasks, as his experience has told him that things can get left for another day. There is, however, not likely to be a pot of gold at the end of the assessment rainbow. "In a site like this there won't likely be something that will save you thousands of pounds. It will be the odd thing here and there that can save a couple thousand pounds each. But it all adds up. You won't become rich by changing only one item."

Nuts and bolts of Waterloo's Hvac

The Waterloo block's total electricity consumption in 2007 was just over 1 million kWh costing £75,750 based on a tariff of 7.5 pence/kWh. Gas consumed in 2007 was just under 950,000 kWh, costing £23,711, based on 2.5 pence/kWh. Of the total £99,000 electricity and gas expenditure, it took £60,000 to run the Hvac system. The Hvac survey from Efficient Air estimated that by following report recommendations, there could be a 22 per cent saving on kWh to run the Hvac system. This equates to around 37 per cent cost savings and also an annual reduction of carbon dioxide emissions of 236 tonnes.