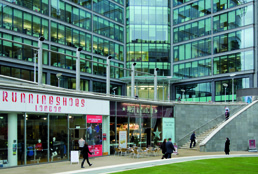 With so many functions to manage across an 80-acre site, the small but dedicated inhouse team at Paddington Central shows its versatility to meet the demands of the many people residing, working, shopping and dining at the west London development

Clustered around one grass-covered amphitheatre in west London you can find prime office space, residential flats, shops, restaurants, public sculptures, travel links as good as anywhere in the capital - there's even a four-star hotel.

Paddington Central is a 2 million sq ft mixed-use development which has been underway since 2000. ?Phase 1, completed in November 2002, saw the construction of Sheldon Square, a 630,000 sq ft development comprising 338,000 sq ft of office space, 219 flats, and 95,000 sq ft of retail space. Work rolled straight on to phase 2, the construction of office locations One and Two Kingdom Street. The first was completed in February 2008 and the second is due to be ready in early 2010. A third phase of development, which will see the creation of up to 340,000 sq ft of additional office space, is still unconfirmed and the timing is contingent upon an upturn in the commercial property market.

The triangular site, which at 80 acres is the size of Soho, abuts the Paddington Canal and sits alongside Paddington Station. The site, with its tree-lined boulevard, is open, attractive and glassy. Every building has its own distinctive architectural style from the imperious steel blue of One Kingdom Street's glass façade to the opulent bronze and mottled gold of the Novotel Hotel. A lot of money has clearly been spent on public art to foster a sense of shared space and visitors are often seen standing in front of the naked Japanese family or the standing man/walking man sculptures with their heads tilted quizzically to one side. The whole development funnels the visitor towards the grass-tiered amphitheatre which sits at the heart of Sheldon Square with its impressive environing multi-story buildings.

The development is managed by a small, dedicated company consisting of just four directly employed staff called Paddington Central Management Company set up by the owners of the development in its early days. Alison Shields, executive director of the company, was headhunted from her previous role at Chelsea Harbour and has been heading up the on-site management team since 2002. The owners told her what they wanted to achieve, but they left the means up to her. "It was exciting to be given a blank sheet of paper and told to come up with your own format for making it happen," she says.

Shields believes that the strength of Paddington Central's management is its bespoke quality. The model of service delivery, the standards, methods and procedures were designed specifically for the people that they serve. When you're only working with one client there's no need for a one-size-fits-all approach. "We're not constrained by formula from elsewhere: we do what we think is best for our people."

Shields' bespoke solution is based on a small onsite team of staff managing a number of specialist subcontractors. Part of the rationale behind this approach to FM delivery is to harness the expertise of specialist security, cleaning, maintenance and landscaping companies. Shields insists, though, that this expertise hasn't been bought at the expense of accountability or closeness. "It doesn't matter that someone else pays them. Our whole ethos was to build up a partnership with our contractors. They're part of our team and we know them all individually." The relationships have been managed through close day-to-day involvement and side-by-side work with the result that the security contractor, Ultimate Security Services, has been with them throughout. Other contractors which have failed to meet their standards have been ejected like original maintenance contractor Haden Building Maintenance.

Another reason behind this model of service delivery is that the people who know best how a thing works are those closest to it. Onsite management and the direct knowledge that comes from being involved in the functioning of the site is a means of quality assurance. "It helps us to understand the jobs we're asking the cleaners and the maintenance people to do. Because we know the site, we know what its reasonable to ask and what isn't." Linton Brander, estate manager for the last five years, emphasises the centrality of this sort of face-to-face contact. "Getting out of the office is the core of the job."

Managing a mixed-use site and trying to find a compromise between the competing claims of residents, retailers and office tenants has been made still more difficult in the first years of the site's existence by the presence of yet another group of stakeholders: construction workers. For as long as Paddington Central has been operational it has also been a building site, as One Kingdom Street and now Two Kingdom Street were constructed.

Shields admits that it has been "very challenging". As well as predictable problems with noise, the Paddington Central Management Company has had to deal with the logistical challenge of keeping service roads open to business traffic and construction vehicles simultaneously. Sustained engagement and openness has been Shields's strategy. Monthly briefing meetings have been held with tenants to keep them updated on site developments and hard-hat tours have been organised.

The greater challenge, though, has been managing a site that has changed so much between phase 1 and phase 2. "The challenge is to offer the same level of service - and a service that continues to be personal - as the site expands," says Shields. The number of people on site daily has increased considerably and the times when they use Paddington Central have changed as well. At first the development was something of a ghost town at the weekend, but as it has grown and become more integrated into the wider community it has blossomed into a seven-day site.

"It's more of a community now. The Chinese restaurant's busiest day is Sunday," says Brander. The message is reinforced again and again that Paddington Central isn't just somewhere where you work nine-to-five before escaping gratefully into the suburbs. It is a pleasant place to be, with its canal-side walks, its swanky gym and its many restaurants.

The tailored service with the personal touch sounds good, but it sounds expensive too. Shields insists, though, that their approach to FM doesn't come at a premium: "We're not expensive. I'm a mean Scot; I don't like spending my money and I don't like spending anyone else's either." The Paddington Central Management Company operates open-book accounting and holds monthly meetings with stakeholders to discuss expenditure. Also, although Shields's operation may be unique, it isn't isolated. The FM team engages in extensive benchmarking, with monthly schedules produced detailing their competitors pricing and service levels.

The business case for taking "a partnership approach" with their contractors is obvious, but even without an obvious bottom-line return Shields has pioneered a community partnership approach. "Another important part of what we do is the community aspect." Shields is adamant that Paddington Central is not a gated community, a rich and fenced-off enclave set amid a wider landscape of deprivation.

In the last year they have raised £40,000 for charity, held an art competition for local schoolchildren and hosted an event called Canal Cavalcade which attracted more than 200 narrow boats and 12,000 visitors.

And don't forget, this is Paddington - spiritual home of the world famous bear. Last summer, discovering to their horror that the management at Paddington Station weren't going to do anything to mark Paddington's 50th birthday, the FM team stepped into the breach and hosted a shindig for him.

The daughter of his creator Michael Bond was joined in Sheldon Square by almost 300 children from locals schools - and, of course, Paddington himself. When it turned out that Shields was about the same height as the Paddington costume she had to sweat her way through a few terrifying minutes before she was able to persuade someone else to dress up and entertain the children.

"I was absolutely panicking until I managed to get out of that one."

As a focus of charity work and inner city regeneration, Paddington Central can lay a strong claim to being a socially and economically sustainable development. But the third side of the sustainability triangle has not been neglected. In fact, the planning authorities ensured that it wasn't by tying the developers' hands in one very significant sense. You have to look very hard at Paddington Central to find a parking space. In Shields' words there is "very little, effectively none." This was a requirement of the planning consent and gave the FM team the push they needed to make Paddington Central virtually vehicle free. Driving to work just isn't an option here.

But even without the door-to-door option of the car, the transport links are enviable. The development sits almost directly on top of Paddington station and there is a footbridge connecting you directly with platform 8. Then there's the Heathrow Express which will get you to the airport in less time than it takes to get there from the long-stay car parks. The bus links are strong and there's also the London Underground with direct access to the Bakerloo, District, Circle and Hammersmith & City lines. The development is also cyclist-friendly. One Kingdom Street, for example, has 200 cycle parking spaces and on-site shower facilities.

The buildings themselves have also been constructed to a very high environmental specification. At 3 Sheldon Street, in spite of its completion date of November 2002, an "excellent" EPC rating was secured. Then One Kingdom Street was built to an even higher specification with geothermal ground source heat pumps and solar panels on the roof. Recycling is another priority alongside energy efficiency and at One Kingdom Street the FM team has benefited from a blank canvas to achieve an 80 per cent recycling rate.