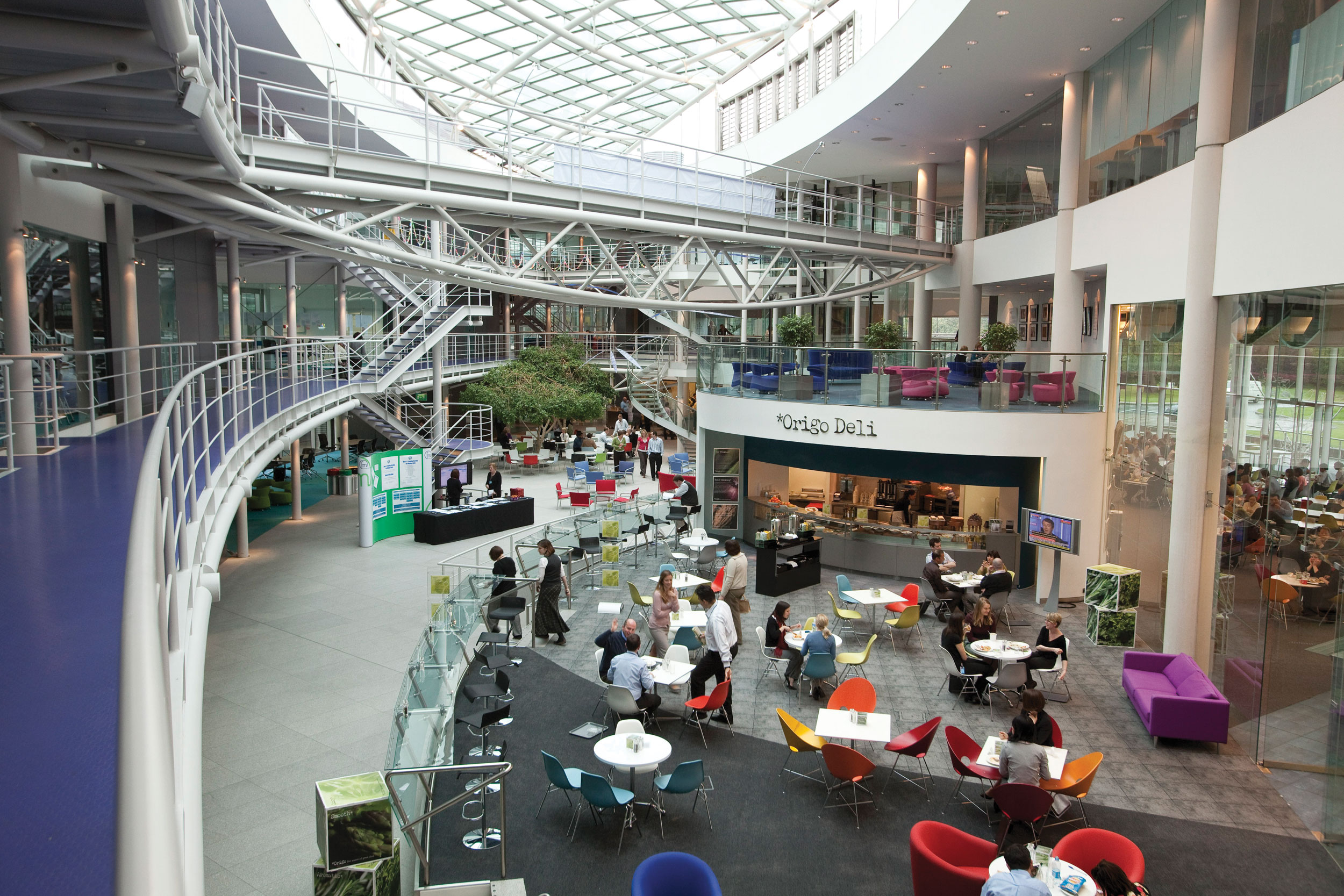 Not content with making products to keep end users free from ailments, pharmaceutical giant Pfizer is doing much to promote the wellbeing of its employees aided by a bright, modern headquarters and an imaginative working culture

Visitors to Pfizer's swish commercial HQ in Walton Oaks in Surrey could be forgiven for being a little impatient. Arriving at the security lodge - a good walk and largely out of sight of the Riba award-winning £75 million main building - it's clear that nobody without the required approvals gets anywhere fast.

As one of the world's largest pharmaceutical companies, the firm is a target for protestors, particularly animal rights activists, explains Aoife Greaney, Pfizer's facilities and real estate manager which means that security is a key element of the FM provision at the 320-acre site. "The security team liaises with other security teams from major pharmaceutical companies and similar organisations to discuss threats and ways of mitigating them."

Despite the obvious risks, Walton Oaks is anything but a fortress. The only chains that FM World saw were colourful paper chains on which were written annual targets for each member of staff, which are draped across the upper railings of the three-story entrance 'street' - often referred to as the palm of the hand around which are five 'fingers' of office space. The impression given is very much of a great place to work: where people are encouraged and supported to work hard but also given the opportunity to play hard.

The premises boasts a gym, run by Nuffield Health under the management of Sodexo, which organises running, cricket and football tournaments in the extensive grounds. The subsidised facility attracts 350 members from the 1,000 staff based at the site and is open from 7am to 7pm five days a week. And staff are encouraged to go outside traditional breaks, explains Greaney. There are numerous exercise classes together with a vast array of state-of-the art equipment and personal trainers. Running trails around the rural grounds are also mapped out for enthusiasts and a special event saw 14 people wade through mud and run 10km on a Sunday last winter. For comfort-seekers a hairdresser, beautician and masseuse are brought in regularly and an occupational therapist is on-site. Local vendors are also invited to sell their wares in the street.

And wellbeing doesn't just end at the changing room door. Nuffield works with Sodexo on healthy menu options for the restaurants - in a workplace where food is an emotive issue because employees are essentially trapped on site during lunchtime (although there is a shuttle bus into Reigate and Redhill at lunchtime on certain days of the week). The street is home to a Benugo sandwich bar, open from 7am to 5pm, and Origo - a generously subsidised deli bar and restaurant which provides a breakfast and lunch service. There has also been staff pressure to reduce food miles which led Sodexo to launch a programme in January revealing the origin of its produce allowing staff to choose more local options.

The restaurant sits 120, although staff can also use the numerous picnic benches outside in fine weather. Benugo is a new addition to the site - the site was previously occupied by Starbucks but the feedback Greaney received was that people didn't want pre-packaged food but bespoke produce. "And the Benugo brand, which is committed to reducing food miles, also sits well with Pfizer's own policy," she says.

In addition to the fitness drive when at work, staff are encouraged to cycle to work through the provision of 30 cycle racks and shower and locker facilities and even walk - although the most recent walk to work campaign unfortunately coincided with an extremely wet April day.

All this is not just window-dressing but a business requirement. The site was previously GlaxoSmithKline's animal health research centre, which Pfizer took over in the 1990s. As part of the 1999 planning permission to convert the site to a corporate HQ, Surrey County Council insisted that 60 per cent of the workforce would have to travel to the site via green methods. Last year Pfizer persuaded the council to change this to 50:50 as the targets were not near being met. The organisation is currently hitting 45 per cent of staff using green transport methods.

This is immensely challenging, says Greaney, as there are no buses to the site and, although there are several train stations in the vicinity, none are within easy walking distance. People live across Surrey and Kent. Pfizer's solution was to set up a shuttle bus service, similar to a school bus, whereby Pfizer employees can book to be picked up by the bus at a set time. This has been a major investment and a major challenge. "It's often difficult for people to predict when they're going to leave the office. If they miss the last bus at 6.30pm then the company funds a taxi for them and obviously that's not a green option," she says.

Service provider Buzzlines has 15 drivers operating shuttle services using eight and 16-seater vehicles to local areas and train stations. Journeys are coordinated, so that they can be back-filled wherever possible, especially for airport pick-ups. Pfizer also operates a car-sharing database and around 100 of the site's 720 car-parking spaces are prioritised for car-sharing.

In addition to focusing on travel, Greaney and her team have been working with the Carbon Trust to reduce the firm's energy consumption. Pfizer has had a Corporate Energy Conservation Guideline since 1996 and an internal energy and climate change programme since 2000. A 5-10 per cent energy saving has already been achieved by tackling what Greaney describes as the small things: installing energy efficient light bulbs and light sensors and a UV filter in the air-handling unit. There is duplex printing as standard and a mailbox system on the printers so unnecessary items aren't printed by employees.

Much of Greaney's work so far has been around education and awareness for staff about the impact they can make such as turning off monitors and unplugging phone chargers. The FM team has also set up a returns section, so staff can put in details of unwanted trade magazines and the post team contacts the organisations and asks them to remove staff from the mailing list. "Otherwise we see the same mail coming in and then being recycled all the time," says Beth Kiernan, Océ's on-site contract manager who also works with staff to encourage people to have online billing for mobile phones and American Express cards. "Up to 800 will arrive on one day and have to be distributed."  Forty per cent of staff have signed up to online billing and the aim is to increase that to 70 per cent.

Everywhere you go at Walton Oaks there are reminders about the ways staff can help to save the environment by reducing their carbon footprint from using the green transport options and non-print days to bank holidays weekends where everything is turned off and messages about a greener Walton Oaks on the back of the repro team's T-shirts.

Pfizer places great value on its FM provision says Greaney who worked for the firm in Dublin for three years setting up and then managing the shared financial services centre before coming to Walton Oaks in July 2006. FM is part of global operations (which includes FM, real estate, travel, leased cars and health and safety) and the director of global operations reports into Pfizer's CFO. The importance of FM is drilled into new recruits from day one as it is the FM department that inducts new staff into the company and building. "The best thing is that they get the shuttle bus from day one rather than trying to convert them when they've got used to driving to work," says Steven Carter, Pfizer's associate director, health, safety and environmental (pictured on previous page).

The pharmaceutical giant has adopted a heavily outsourced FM model; just Greaney, an admin assistant and an FM co-ordinator are directly employed by the firm while the remainder of the almost 100-strong FM team work for one of three contractors: Sodexo for catering, cleaning, waste management and maintenance; Océ for records and print management, post room and office services; and Buzzlines which deals with transport. Despite this FM is very much seen as one team and the FM message and logo is branded throughout the building.

In many ways Pfizer's FM provision is very advanced, but the workplace culture remains fairly traditional. Anyone who works at the site for three days a week or more is guaranteed a desk. There are hot desks on every floor for people who are not based on site all the time, and leading off the street are a range of breakout areas and meeting spaces that allow staff and visitors to work away from their desks: the firm has an R&D site in Sandwich, Kent, where 2,000 scientists are based, as well as operations in 180 countries.

The ratio of open plan to cellular offices is 80:20 (this is a decline in the 85:15 which was achieved when the firm moved into the building in 2001). Cellular offices are given to managers and directors and size depends on grading: managers' offices have two windows, while directors' offices are larger with three windows. Each staff member receives one linear metre of storage on site plus a pedestal which helps to support the clear desk policy. Records management is a highly critical part of Pfizer's business. By law they have to keep records of medicines for long after that medicine is no longer used. There are two off-site storage facilities - one in nearby Wallington where 70 per cent of material is archived and the other underground in a disused salt mine in Cheshire. If an item hasn't been recalled for three years from Wallington it is moved to Cheshire.

Greaney isn't alone in facing these challenges. She shares best practice and experiences with both the Kent premises and Pfizer sites across Europe through a 13-person conference call every three weeks. But Greaney feels that the UK very much leads the way in FM: "The outsourcing model is much leaner than it is in Paris or Brussels, for example, and we have come a long way in engendering a sustainable culture within the organisation - although there is still much to do."