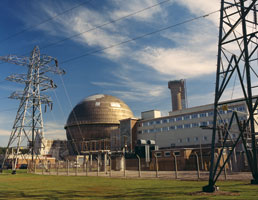 Servicing a site that includes nuclear processing plants, a hotel, and even a river with wildlife in abundance, the team based at the huge Sellafield facility in Cumbria find themselves encountering just about  every aspect of FM there is

Drive through the north-west corner of England, past rolling hills and picturesque lakes and the scenery takes a sudden and dramatic change. Rural turns industrial culminating in the 700-acre Sellafield nuclear power station perched on the edge of the Lake District, almost slipping into the Irish Sea. The contrast is harsh - huge towers stand awkwardly next to chocolate-box fields. But Sellafield remains at the heart of the local economy, and is one of the two largest, non-governmental employers in West Cumbria, with 11,500 staff including apprentices, graduates, doctors and support staff. It is also the centre of the nuclear industry with probably the largest concentration of nuclear expertise in Europe focused on decommissioning the UK's nuclear legacy, fuel recycling, manufacture and waste management. Sellafield, along with other nuclear sites in the UK, is owned by the Nuclear Decommissioning Authority but managed and operated on the NDA's behalf by Sellafield Limited.

Despite its industrial character, the 3km by 2km site is full of exceptional wildlife including protected natterjack toads, adders, rare birds, a colony of oystercatchers and falcons. A resident wildlife expert works on site observing and counting creatures to ensure the site's activities do not present a hazard for the protected species. A pair of winged plovers, for example, was breeding in one building which made it inviolate, explains Jim Lord, Sellafield's superintendent officer and contract manager.

Notwithstanding the abundance of wildlife, the river Calder running through the site and the picturesque location, there is nothing pretty about Sellafield itself. The site is a hotchpotch of architecture, with 1940s and 1950s buildings and portable cabins standing cheek by jowl with modern blocks and obvious industrial facilities such as Calder Hall. Unlike many facilities, it is a triumph of function over form with the Sellafield railway station adding to the industrial feel. Of the 1,500 buildings on the site, which include everything from bus and smoking shelters to plant rooms, office buildings and bridges, 400 are managed under two multimillion pound FM contracts with Dalkia and Mitie.

Under the five-year deals Mitie runs the northern part of the site and Dalkia the southern end with each service provider taking site-wide responsibility for specific areas. Mitie for example manages grounds maintenance across the site while Dalkia is in charge of waste management and street lighting. Catering is run by Rentokil Initial's subsidiary Autograph Catering. "When the contract was let in November 2006, the commercial department felt that it was important to maintain a competitive atmosphere," explains Lord.


The two organisations complement each other well - Mitie coming from a soft services background and moving into hard services; and Dalkia the opposite. But Lord believes when the current contract comes to an end - it is half way through - in November 2012 it may be let as one contract. "It has been competition for competition's sake with contractors tripping over themselves to help and it would work better as one team."

Dalkia employs 59 people at the site plus about 250 sub-contractors. Mitie has a similar number in total, but more are directly employed because of Mitie's self-delivery model. The client-side FM team is made up of 30 people who set strategy and manage the contractors. "FM is viewed highly within the organisation as health and safety and security are top priorities for all staff at Sellafield, in both radiological and conventional terms," says Lord. At Sellafield's sister site in Capenhurst, Cheshire shop floor workers, not managers, lead on safety through the Safety First programme. In addition the new head of FM at Sellafield reports into an infrastructure director, originally from the US who has been involved with FM in the US and understands its strategic value.

Prior to 2006, there were 40 contractors across the site and a team of superintendent officers managing them. It was, acknowledges Lord, inefficient and costly, which led to the rethink and the current arrangement.

The old system reflected the way Sellafield used to be run "as different empires", says Lord. But now there are standardised procedures and processes down to the type of furniture to be used across the site. Churn still remains immense with a Luton van and two people employed full-time to move people and furniture around the site.

Every building has a different design and different furniture but this is gradually becoming more standardised.

The FM contract is also evolving, together with the professionalism of FM on the site as the two FM service providers bring innovation to the support function at Sellafield. One key success has been the introduction of rapid response teams for fabric and M&E problems. The Dalkia team aims to get to a problem within 30 minutes of it being reported.


"Sellafield makes the traditional office contract look boring," says Nick Burchett, Dalkia's marketing and communications manager, who used to supply the site with specialised CCTV equipment for the active (nuclear) areas. "It covers just about everything in FM."

It's hard to disagree with his summary. For a start Sellafield is a 24-hour facility operating 365 days a year with three daily shifts. Some of the five restaurants, plus grab-and-go facilities and mess rooms, operate for 24 hours a day to support the shift patterns, although the FM help desk typically operates from 7.30am-4pm.

The site is divided into separate zones. In the centre is the decommissioning area, sectioned off with high fencing. The challenge for the decommissioning process is considerable as the buildings are so close together compared to facilities in the US where they are far apart.

Although parts of the site are being decommissioned, Sellafield is also a functioning nuclear facility - home to two nuclear fuel reprocessing plants. And there is plenty of new activity such as building construction to cope with Sellafield's commercial work which Dawn Senior, Dalkia's soft services and health and safety manager, describes as a typical construction project which involves FM.

Much of the work towards making Sellafield become more sustainable also mirrors a traditional FM's role. The site is changing from incandescent to LED bulbs for streetlights, it has redesigned heating and water supply systems to make them more efficient and removed individual bins to increase recycling of paper, plastic and cardboard. The company encourages people to cycle to work with money off cycle helmets for example. Other complaints echo those heard in corporate offices. "We have 11,500 FM experts on the site all of whom can do the job better than us," says Lord.


Unlike at the Scottish facility Dounreay, where FM service provider Johnson Controls gets involved in the active zones, Mitie and Dalkia look after the facility up to the change areas - they don't go into the active areas which have their own electricians and service personnel. But there remain aspects which are unique to managing a nuclear facility. The gates, for example, are manned by the Civil Nuclear Constabulary, which is separate from the FM security provision. Dalkia also manages a hotel, about 6km from the site, which is used to hold conferences and houses the Police Training School. It can also be transformed into the emergency control centre.

But similar to Dounreay, Sellafield is the focus for its local community with most of the workers coming from a 40km radius of the site. Some people have worked at their for all their careers explains Senior, who started at Sellafield as a security officer in 1993. "We employ cleaners who have been here for 15 years - which is rare in the transient cleaning industry. Staff retention and loyalty is very strong."

Much of that is because of the career development opportunities on site, says BIFM member Senior who has risen from her security officer post through to reprographics operator, document centre supervisor, account manager and document services manager/safety manager before starting her current role in January 2007.

"You can start in one role and end up in something completely different - Sellafield is a small town and there are huge opportunities available. And the various companies which work on the site are all very good and training and development."

Senior recently started a degree in business management through the University of Cumbria at Lakes College in Workington and encourages her team to sign up for training courses. So far 21 people are doing NVQs at Lakes College from customer care and business admin to team leading and stores with another two doing apprenticeships within the FM team.

And the case for good training and development was never better illustrated than the fatal outbreak of Legionnaires' Disease in 2002, just a few miles down the coast at Barrow-in-Furness.

"It was a real wake-up call about the importance of training and inspections, even though we were compliant," says Lord. "And it goes to show that even on a nuclear site, good FM is the key to good health and safety."


1941    Site acquired by the Ministry of Supply to produce TNT

1945    Site sold to Courtaulds to develop as a manufacturing  plant

1947    Ministry of Supply reoccupies site after persuading Courtaulds  to relinquish it so the government could establish an atomic materials production organisation.  Work begins     on two air cooled reactors

1952    The reactors, known as the Windscale Piles, are operational producing plutonium for military purposes

1957    Following a fire in Windscale Pile 1 both piles are shut down. They are now being decommissioned

2004/5    Nuclear Decommissioning Authority established to run nuclear decommissioning; it takes over ownership of Sellafield. British Nuclear Group acts as the contractor to manage     and operate the Sellafield  site; the government  reveals the NDA's intention is to contract out the operational management and decommissioning of the nuclear facilities

2005    More than 80,000 litres of radioactive waste is discovered to have leaked in the Thorp reprocessing plant from a  cracked pipe into a huge stainless steel-lined concrete     sump chamber built to contain leaks. No danger is posed to the public but the plant is shut down  pending repairs

2008     Sellafield is taken over by a US-led consortium which includes Amec, as part of an initial five-year £6.5 billion  contractx