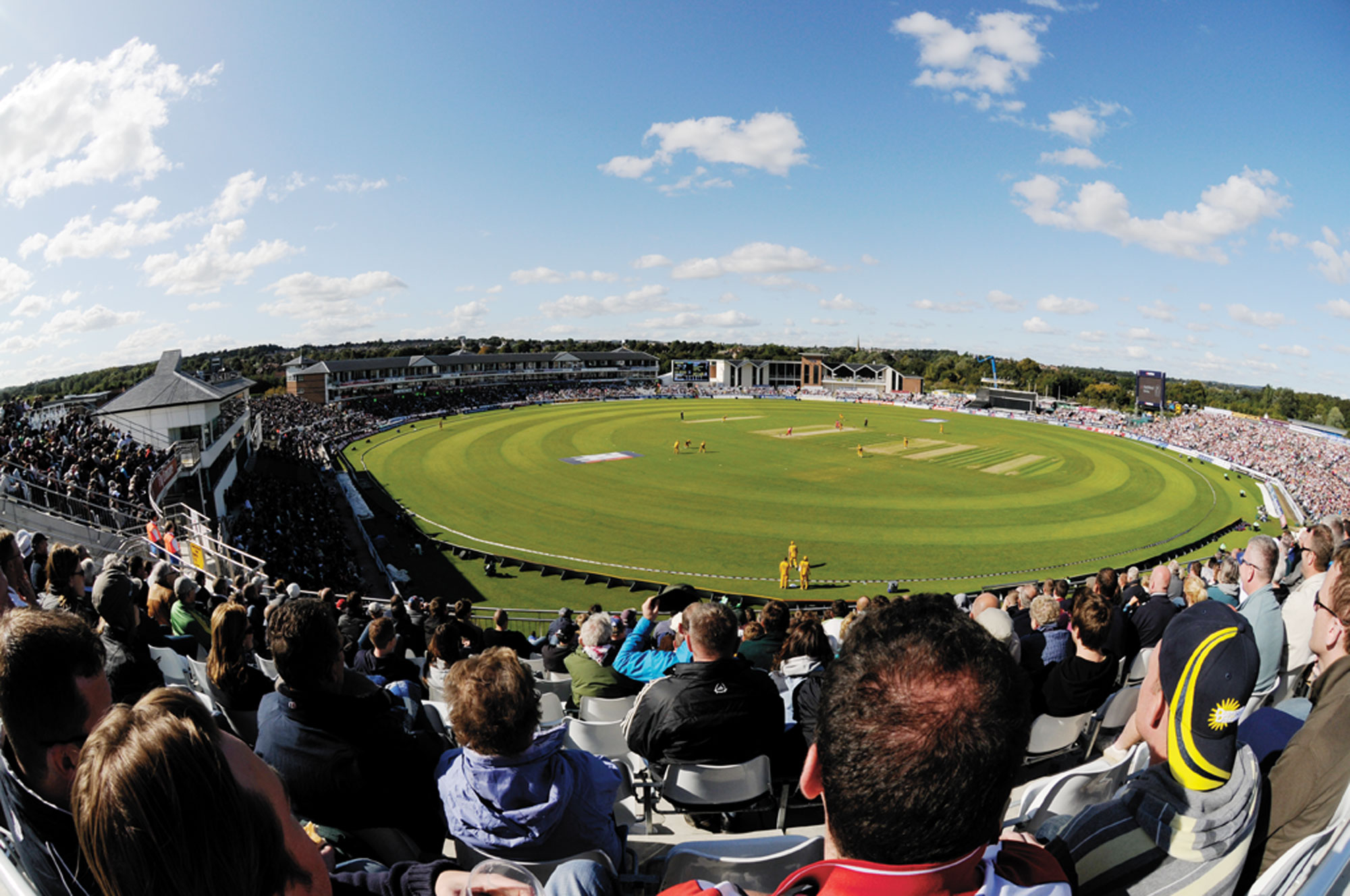 Maintaining Durham's status as an elite international cricket host is no walkover for operations and events manager Richard Dowson. Competition is fierce and standards exacting, but it is transport that stumps him the most

Maintaining Durham's status as an elite international cricket host is no walkover for operations and events manager Richard Dowson. Competition is fierce and standards exacting, but it is transport that stumps him the most

The backdrop for Durham County Cricket Club's Riverside Ground is picturesque. Where The Oval in London has the imposing metal frame of an old gasworks looming over the stands, this Chester-le-Street venue offers unobstructed views of Durham Castle, perched upon its hill, framed by a profusion of trees. But don't let the idyllic setting and the traditional image of cricket as a sleepy village-green affair fool you. However much the setting belies it, as soon as one starts asking questions it becomes apparent that, at least for the FMs involved, it is a case of cricket, red in tooth and claw.

In the world of cricket facilities, the operative principle is survival of the fittest. The acid test of success for the top-ranking grounds in Britain is whether they are able to host well-attended, crowd-pleasing international games. The problem is that the number of international standard grounds outnumbers the number of games in each set of fixtures.

This situation hasn't arisen accidentally - the England and Wales Cricket Board (ECB), the body with the international games within its gift to give, wanted it this way. Because if you create conditions of scarcity then the remarkable competitive spur created drives all of them to aim for perfection. The grounds change, they improve - they evolve. Because if they don't the international games dry up and they face financial extinction.

However, cricket facilities haven't always been organised along these lines. In fact, it isn't unfair to say that Durham County Cricket Club inaugurated the current era of fierce competition. In 1992 the ECB decided to award Durham first-class status, allowing them to play against the best sides in the country. But there was a catch. In exchange for granting this status, the ECB wanted Durham to build a ground that was capable of hosting international fixtures. No guarantee that Durham would be awarded England games was forthcoming; the requirement was simply imposed and the tantalising possibility laid out before them.

Richard Dowson, operations and events manager at the Riverside, talks in characteristically understated fashion about the part that Durham played in lighting the touch paper for the competitive era.

"There hadn't been a new test match ground in 80 years. We came along and ruffled the feathers a bit," he says. The ECB reacted by drawing up a set of facilities guidelines for clubs with international aspirations. They called it TSF2. Want to host international games? You must meet the minimum standards set out. Still want to be hosting internationals in five years? Find a way to hit the exacting "model" standards. The Riverside's arrival on the international scene and the demands placed on the clubs by TSF2 have given a huge impetus to redevelopment work. In London, Lord's has increased its capacity to 40,000; Nottingham's Trent Bridge has been heavily redeveloped; and The Oval has plans to construct a hotel. Even the relatively new-build Riverside is in the middle of a continuous programme of redevelopment work. In 2005 a new media centre was built, last year a new tier of seating was added to the stand next to the scoreboard and plans are afoot to install permanent floodlighting.

With only five Ashes tests played in England, and intervals of four years between the games, what can Durham do to convince the ECB that its facilities warrant the exclusion of one of the grounds with decades of history, such as Headingley in Leeds or Manchester's Old Trafford?

"Well, we're the new kids on the block," Dowson admits. "So we can't be the biggest or the most famous ground. But we can look to be the friendliest and the most welcoming."

The key to providing that experience, and perhaps the most crucial part of Dowson's role, is the massive match-day facilities workforce. On a rainy Tuesday afternoon in November, there are 30 members of staff at the Riverside - a real skeleton crew for such a big site. But on international match days, such as September's seventh one-day international game against Australia (which England won), staff numbers swell to more than 500.

"It's a real challenge and a real contrast," Dowson accepts. The worst-case scenario is that a spectator will walk up to a member of staff and ask them where the nearest toilet is, only to be met with an unhelpful shrug of the shoulders because the temporary worker doesn't know the ground. Durham's approach to the issue is twofold. One, source good suppliers and build long-term relationships with them. Two, identify the key temporary staff and use them to cascade the necessary information down the chain.

The other crucial thing is not to expect too much of agency staff, many of them inexperienced, some of them teenagers - such as making sure the supporters don't drink too much, for example. "It's difficult to expect an agency member of staff who came in on the bus in the morning to tell a big guy who's had too much to drink that they won't serve them." Trained supervisors are expected to intervene in such cases.

And Dowson accepts that it does happen. "Wherever you have lots of people and alcohol available you have the chance of some issues." But at Durham measures have been put in place in recent years to ensure that it maintains its family atmosphere, without turning it into a killjoy ground where a grown-up can't enjoy a beer on a sunny afternoon while watching the cricket.

Stringent search procedures are in place for anyone entering the ground. All alcohol is confiscated. Once inside no-one can buy more than four drinks at a time at the bars. Queuing tends to have a sobering effect on the more excited members of the crowd. The same effect is achieved through the use of scheduled "cooling off" periods when the shutters go down on the bars. Facilities staff can always make an unscheduled closure if they think the crowd is getting too rowdy.

Transport causes far more headaches at the Riverside than drink does. With 18,000 supporters, many of them coming from far afield, lots of them unfamiliar with the area, problems are unavoidable. With a look of genuine ruefulness, Dowson calls it "the most difficult and frustrating part of my role". This is another side of the ground's picturesqueness.

Unlike other international grounds, such as Lord's or the Oval, the Riverside is not located near the centre of a major city next to public transport terminals. In fact the ground is not even in Durham. Chester-le-Street is a relatively small town with a population of 24,000. Perhaps somewhat short-sightedly, the ground's transport strategy was originally devised around its accessibility by road. Just minutes from the A1, if the parking were adequate and the traffic bearable, it would be an easy drive - even for people travelling long distances.

But the environmental agenda has scuppered any thoughts of a number of mega car parks round the ground. So Dowson spends his time pleading with obtuse railway companies to add extra carriages to trains and making the case for more trains to stop nearby rather than just rolling through. To supplement this he has set up a park and ride scheme with capacity for 1,000 cars. There is also a second scheme that allows you to park relatively close to the ground before completing the journey on foot - they call it "park and stride".

It's not just a case of finding one plan that works and sticking with it, either. "With the Riverside there is no such thing as one travel plan fits all," says Dowson. If the game is on a Sunday, the trains will be bad. If it is a day-night or a 20/20 match, the evening traffic has to be factored in. If, as with this year's one-day international against Australia, it is also the day of the Great North Run then, difficult though it is, you have to try and find a way to allow for that.

Very quickly one starts to understand why Dowson works on such issues with a specialist travel planning company.

Conference supremo, transport coordinator, music promoter, alcohol-rationer, cricket-protector, general-in-the-fight for Test matches: it sounds like a very taxing role, particularly for a five-year stretch, but think about it like this: the cricket season runs from May to September - every year Dowson has about seven months to recover ("strategic planning" he calls it) before the rush of summer fixtures starts again.

More than a cricket venue

It's easy to forget sometimes but sports clubs are businesses. Maybe not in the sense of having a single-minded focus on maximising investor returns but they are always going concerns in that they need to make money. Turning a profit is a precondition for everything else that a club wants to achieve in sport. However well loved it is by its fans, and however much coverage a club gets in newspapers and sporting almanacs, if it can't make money then it's a goner.

Durham County Cricket Club is no different. It wants to make money. It needs to make money. But it does that so that it can promote the game of cricket. In Dowson's words: "Cricket comes first. It is the priority, the be all and end all."

In order to do that the club has to be more than a cricket venue. An increasing focus for the club is on providing conference facilities. It has four lounges and 15 boxes, all of which can be booked for meetings and conferences. The club also boasts a 400-seater conference theatre. This provision goes a long way towards subsidising the cricket.

Revenue has also been raised by taking on Austin's Bar and a Bannatyne's gym as tenants. The revenue that this brought in was used to fund the additional tier of seating.

More ambitious, however, is the attempt to turn the club into a top-class music venue. A number of big names have already played at the venue, including the Sugababes and Elton John.

Two weeks before a one-day international between England and Sri Lanka 10,000 music fans were dancing on the pitch - something that presumably didn't go down too well with the ground's staff. "These are the gambles that you've got to take to make the most of the pitch," says Dowson. Like any other business out to make money, a cricket club has to take some risks.