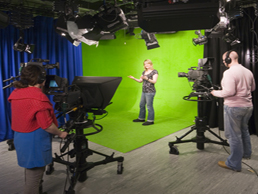 When plans surfaced to turn one corner of an office at the Coventry, Solihull and Warwickshire Partnership into a state-of-the-art television studio, FM Clare Hillier readied herself for a fit-out project of a very special kind.

When plans surfaced to turn one corner of an office at the Coventry, Solihull and Warwickshire Partnership into a state-of-the-art television studio, FM Clare Hillier readied herself for a fit-out project of a very special kind.

Economic development for central England has experienced a TV makeover. An internet based television station run as part of the Coventry, Solihull and Warwickshire Partnership is the region's business community giving an ultramodern platform. Central Vision, available 24 hours a day, broadcasts programmes covering business, education, health, leisure and local government. It has a regular programme of scheduled broadcasts and a series of additional on-demand channels dedicated to special interests. But rather than hiring studio facilities from established broadcasters, CSWP secured a level of EU regional development funding that meant they were running the show.

CSWP's Clare Hillier, facilities and environment manager, first learned of the project that was to take her along a steep learning curve in 2007: "I knew the bid was being made towards the end of that year. We heard that we'd won at the beginning of 2008, and that we had to deliver by December."

It's not everyday that an FM is taken aside and asked to create a TV studio in an open plan office on the outskirts of Coventry - what sort of experience did Hillier have in establishing a facility such as this? "None. It was a seat-of-the-pants stuff. Luckily, we were partnered with Sony who had a wealth of experience in building studios and so had heaps of advice. The head of production at the time (Matthew Taylor) also had heaps of experience."

It was a really good working partnership even though plans were constantly changing through the process - the final drawings were only completed two weeks before the project was delivered. The partners, contractors, specialist sub-contractors (who came from all corners of the globe) were well used to working with people from whom this was new territory. But was Hillier there to provide a reality check to these partners who were used to bespoke facilities?

"Most TV studios are like warehouses - this is an office. We had to work around that. For example, we are on the first floor so getting some of the big stuff up here was interesting..."

Special insurance cover was required for the unloading process for the equipment arriving from Sony: "Sony's own insurance applied to the loading and the transit company had the journey covered. But we need a policy separate to our own usual arrangements because of the cost of the equipment being moved."

With a state of the art high definition television camera being priced at £50,000 (and that's not including a lens or stand) such caution is understandable. The camera is typical of the high-end specification that Hillier was working to: "The production values had to equal or even surpass the industry best. For example, with acoustics we took the BBC standard but that was the thinking we applied all the way through. We weren't going to cut corners - which was lovely for me."

The investment from the EU - £3 million - was intended to kickstart operations at Central Vision, but there were stipulations. The brief was to start up a community channel which would serve the e-marketing purposes of local business as well the voluntary sector and education. But as head of production Nicola Roper explains, the eventual aim was for Central Vision to be self-sufficient with revenues from equipment hire and production commissions: "The funding deal meant that our first obligation once the studio was up and running was to produce 370 ads for local SMEs. We completed that in September last year and now our clientele are local businesses looking to expand their e-marketing output."

As well as production, Central Vision also runs training courses on lighting techniques, sound, and presenting. "We recently did some with Yell.com - and we work with web design teams looking to become more familiar with video."

Roper believes the facilities now housed at Central Vision are unique in standard and accessibility to the business community: "I don't think anything else like this exists."

While Hillier - a BIFM member since 2004 - welcomed the thorough approach, it was perhaps the only way to achieving national broadcaster requirements in a setting that is, after all, a typical open plan office floor. Where the BBC have the luxury of purpose-built isolated, spacious studio facilities, Hillier's starting point was a first floor office with regular corporate occupiers across the remainder of the floor. There were also tenants above and below with ordinary hollow ceilings and floors between. As Hillier puts it: "Taxing".

At least, for the editing suites and the control room the target was for "quiet office" but for the studio room broadcast industry sound proofing and acoustic panelling was sourced. "The walls are this thick," emphasises Hillier, with the pose usually taken by boasting anglers.

Even so, soundproofing is always compromised by the need for access. Two sets of double doors separate the sensitive studio area from the office corridor. So the while command for "quiet on set" brings every member the production team present to silence it cannot extend to the passers-by, the staff of the other CSWP projects which share the floor with Central Vision. The common workplace sounds of footsteps, chatter and slamming doors couldn't be allowed to breach the controlled environment. A large red "On Air" sign illuminates the corridor whenever the cameras are rolling beyond the double-doors of the studio and that's a signal to all occupants to take a different route (barring emergencies).

An intermittent no-go area is difficult to manage and enforce, but this house rule relies on the goodwill and cooperation of all and Hillier is pleased to say that it has been readily accepted: "It may be a standard cultural expectation in the broadcast industry but in an office it takes us out of our comfort zone."

Central Vision occupies a quarter of a single floor in Tower Court, an otherwise regular, modern office block close to Coventry city centre. Central Vision's stablemates in CSWP realise it's importance to the project as a whole and take satisfaction from the quality of facility it provides.

But one part of the transformation was to provide a new staff kitchen for the CSWP staff after one of the existing ones was commandeered into the studio area. Hillier took the decision to involve staff in the design of the new kitchen, an important step in fostering a feeling of unity and to avoid marginalising anyone as such a high profile project takes shape around them. And there are many people to keep contented. Hillier's remit covers 332 staff, across 90 sites. The spread is due to CSWP's role in providing advisory services to young people in Coventry and Warwickshire under the Connexions project.

"For FM within CSWP, I am it. I run every aspect of it. As we are a not-for-profit organisation, government-funded, we try our utmost to spend as much money as possible on the delivery of services to the community. So support costs (and staff) are kept to a minimum."

With such a comprehensive job to perform, was it a burden to be approached to create a TV studio, from a zero base, with no experience in such an environment? "If CSWP hadn't asked me to do it they would have had to commission an outside organisation, and I would have been quite hurt," says Hillier, with a smile.

"I've done offices for years and the thing I like best is that I have new challenges all the time. For Connexions, the city centre one-stop-shops or the space provided in colleges are similarly challenging, which is great. I've also just taken on the IT support contract management with BT Engage. As an FM you are used to contract management even though the subject areas may be disparate."

Hillier's other commitments includes managing the cleaning contract, mobile phones, telephony and stationery - "But I don't manage any catering... which is a shame," Hillier says, playfully.

"But for someone to come to me and say - here's enough money, go and build a top quality TV studio - fantastic. It's the most exciting thing I've done."

The Green Room gave Hillier the opportunity to take a break from sourcing furniture from office suppliers and fit-out a comfortable waiting area for guests preparing to appear on screen. Buying acoustic panelling, and a sound booth for voiceover recording was all new territory.

Even the air-conditioning set up had to be broadcast standard to cope with the inordinate heat of the studio equipment and yet remain inaudible. And there can be no fire detection in the studio as special effects could activate the system at a no doubt crucial point of broadcast.

"It was all different, new, and a steep learning curve - the challenge was similar to what I used to, creating a workspace - only off at a tangent. But we had tight timescale, which we met, and we created it from nothing.It's the thing I am most proud of."

THE POWER OF TELEVISION

Central Vision's studio has its own power supply, separate from that serving the rest of the CSWP's operations at the five-storey Tower Court building: "It's pulling three times the rest of it put together," says FM Clare Hillier. The office had two supplies but once the calculation had been made as to the studio's usage arrangements were made to serve and meter it independently. Meanwhile the studio itself also appears on screen, by virtue of the CCTV system at CSWP. The internal walkways of the office as well as corridors are fitted with fixed domes as part of the security arrangements to protect equipment purchased at a cost of £2.5 million. Hillier explains: "We had to approach a specialist insurers - our normal company didn't know what to make of it all."