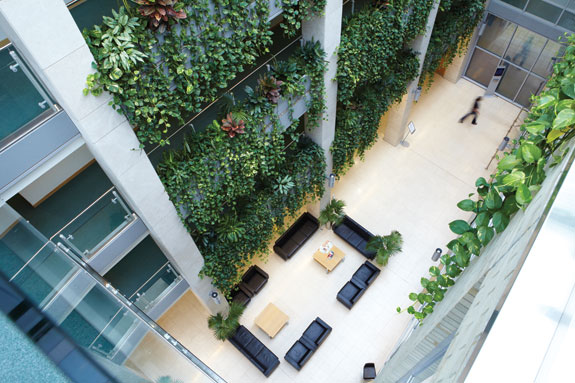 Bringing government agencies under one roof has been the challenge at the London HQ of the Food Standards Agency, finds Martin Read.

The public sector has faced a tough couple of years. The government's 2010 spending review has had ramifications for every area of expenditure, with consolidation of property requirements a particular focus - and one felt keenly at Aviation House, London headquarters of the Food Standards Agency (FSA).


Aviation House lies just south of the busy junction between High Holborn and Kingsway. It's almost lost behind the imposing Sainsbury's development that sits on the corner of the junction.

The building's classical façade is all that remains of the former Holy Trinity Church that once stood here. That church was itself a replacement for the Little Queen Street chapel, built in 1831 and only demolished when its foundations were undermined during construction of the tube network's Piccadilly Line. Holy Trinity was damaged by fire in 1985 and closed, with the site eventually converted into offices. At this point in its history the building's name makes sense - it opened as the headquarters of the Civil Aviation Agency (CAA).

When the CAA moved out in 2001, the FSA took over as sole tenants, taking all eight floors of the building. Since then, facilities management has always been outsourced by the FSA; the current incumbent supplier G4S was awarded a five-year contract following a 12- month long re-tendering exercise in 2008. That contract runs until 1 September 2013, with the potential for a two-year extension.

Much of the work in recent years has been concerned with the introduction of other government agencies into the building. In 2007, during the FM re-tendering exercise, negotiations brokered by the Government Property Unit (GPU) were about to result in the first such re-homing; the Office for Standards in Education, Children's Services and Skills (Ofsted) joined the FSA in Aviation House from its previous offices just down the road on Kingsway.

The FSA's estates management team carried out its first major re-stack exercise to facilitate Ofsted's introduction, consolidating the FSA operations from eight floors down to six. "We achieved that by going open-plan," says FSA estates manager Louis Loizou. "All directors and staff at a certain grade level were moved out of their own offices. We wanted to make better use of the space and could see that, across government, more flexible ways of working were being introduced such as hot-desking and open-plan designs."

The re-stack exercises were driven more by a reduction in headcount - the FSA has been far from immune to the changes brought about by cost reduction pressures across government.
Indeed, examples abound of the change that the facilities team has had to get used to. The Meat Hygiene Service was dissolved in 2010, with its staff and functions moved across to a new FSA Operations Group. More recently, nutrition policy was taken out of the FSA and moved to the Department of Health.

These are just two examples of the changes in government policy that have led to changes in the number of occupants in Aviation House and thus new facilities management requirements. Today, the building is home to a further two government agency tenants the Government Digital Service (GDS, better known as Directgov) and the Medical Research Council's Clinical Trials Unit.
At the beginning of the current FM contract in 2008, Aviation House hosted 650 staff from the FSA and Ofsted, a figure that dropped to around 450 between 2010 and 2011 as government austerity measures hit home. The figure has since risen to an unprecedented 850 following the introduction of the GDS and Medical Research Council.

That's a lot of churn to deal with, says Moira Hedley, regional director for G4S, who says that the value derived from the FM contract has been upped as a result of the increase in the number of tenants on site (each of which takes its FM via the existing FSA contract). Says Hedley: "We've reduced the cost base of the service and yet deliver it to a larger number of people for same price."

Hedley is referring to her team on the ground, run since 2009 until recently by contract manager Bill Cumber. Cumber's three years on the FSA contract have been marked by the constant change alluded to above, but through a solid day-to-day working relationship with Loizou, problems have been pre-empted.

Monthly meetings and a formal quarterly contract review take place between the two  but it's ad-hoc communication that keeps things moving smoothly. The contract manager's office is close to the estates team's office ("as soon as they know something, they talk to Bill as the contract manager and get him involved early on," says Hedley. "You get to know what's happening on the help-desk.")

If this is now a smooth-running contract that has adapted well to constant change, it's probably because it all started with a bang. The first test for G4S as the new contractor came on day one when security guards due to be TUPEd from the previous contractor decided to take up alternative offers of employment. 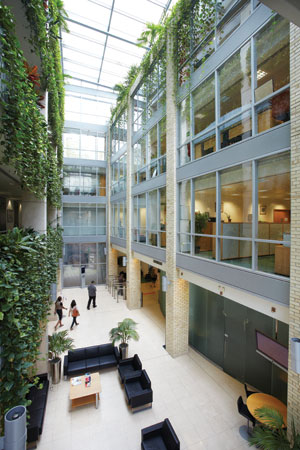 Guard of honour
What could have been a disaster was averted when G4S deployed guards from its G4S Gurkha Services division - and despite initially being deployed as a stop gap, the guards have remained in post ever since.

"I think after that we found that there was never going to be anything we couldn't tackle," says Kathy Holley, the FSA's head of accommodation and departmental security officer. "Our relationship is based on honesty. If everything is out on the table, it doesn't matter if it's good or bad."

Hedley explains that the nature of the building and the type of high-level visitors it gets has always meant security is vital. "It's the nature of the beast," she says. "And it's also situated in High Holborn next to the tube station - that in itself presents issues of integrity and building security."

Loizou says that the FM delivered through the contract is close to TFM in its breadth of scope, although planned hard maintenance is contracted directly (to JFA) by the landlord. Service has also been affected by the need to integrate new tenants, with the issues that arise during that process not necessarily obvious.

However, channelling FM requirements through a centralised helpdesk has helped, as does representation from each of the tenants via a designated office manager, although Loizou emphasises the benefits of ad-hoc communication throughout the working month.

"I meet with [the designated contacts] monthly to talk through any issues they may have with the service," says Loizou, "but we have so much informal discussion anyway; no one leaves it for four weeks until the next meeting. We encourage them to use the helpdesk as the first port of call. If they feel their issue isn't being resolved, they can go to Bill or myself."

Most recently, these have covered the London Olympics and the upsurge in enthusiasm for cycling to the office.

Says Cumber: "More people had started coming in on bicycles. One of the facilities issues was that we were limited in the number of people who could use the available shower rooms. Also, we'd been looking into changing some of the cycle racks and that issue came up, as did a few comments passed to us by security that cyclists weren't swiping in properly in the morning, for example. There were a lot of issues, but having a meeting about them was appreciated."

Olympic ambitions
For the Olympics, meetings were focused on business continuity and security issues. Tabletop exercises were conducted, incidents simulated and backup plans generated. Each floor has designated floor wardens and the availability of each during the Olympic period had to be ascertained.

Catering requirements were amended after an audit of the tenants' flexible working plans for the period; guarding shifts were extended earlier and later to cater for temporary night-time deliveries. "We had to mirror whatever our clients are doing by ensuring our people are here," explains Headley.

The working hours of cleaning staff had to change temporarily and waste pick-ups from Camden Council were rescheduled to between 10pm at night and 6am. The local authority relaxed its normally rigid time limits on deliveries and that meant rescheduling of staff hours to provide cover as well as the introduction of an extra guard.

Liaison with local business groups took place while the facilities team had to deal with the FSA's own sustainability team to ensure these temporary changes in process were conducted in as sustainable a way as possible. (The FSA sustainability team sends data back to the Cabinet Office on a quarterly basis for evaluation.)

The IT network's capacity was increased to cater for both the temporary and likely more permanent shift to flexible working amongst clients.

From April 2010, all waste generated in Aviation House has gone to incineration or recycling, with nothing to landfill. At the time of our visit, the big initiative was to drive behavioural change with a view to ensuring proper waste segregation and more awareness of energy use. Much of this is simple use of signage - a notice above a thermostat suggesting it may be turned down, for instance, or another showing recent energy consumption figures to help connect building users to the wider energy saving agenda.

For the future, Loizou would like to introduce more break-out areas and quiet rooms at the expense of meeting rooms, but only after a series of usage workshops with tenants and their employees ("we want their buy-in," he says).

Both client and contractor believe that in terms of occupant levels, the building is now close to capacity. But who knows what changes the next shift in government policy might bring.


All-in-one FM
In August 2010, acting in response to the government spending review, G4S was asked to save £250,000 on the FSA contract over the four years from 2010 to 2014. To achieve this, the contractor examined its staffing and decided that certain specific job functions would no longer be carried out by dedicated personnel. After all, says Moira Hedley, "segregating people off for specific tasks, wasn't necessarily the best thing for them as individuals or us as a business."

Instead, a policy of multi-skilling facilities operatives has been introduced. From reception to reprographics, health and safety to sustainability, staff have been re-trained to offer expertise in all of these functions, not just one. This has allowed for a reduction in hours on the contract, but also the introduction of a deputy contract manager position - a crucial extra role that means those in the facilities team can now see a career path that they could follow.
The contractor was able to deliver all of the required £250,000 saving in the first year, most as a result of the multi-skilling project.

Hedley confirms that this was much more than an exercise in cutting hours: "We talked an awful lot with the FSA. From the contract manager position down, we looked at the staffing structure when considering multi-skilling and the deputy position. We're creating a career path boost, and in fact, the next step is that we're hoping to get a couple of FM apprentices.
"The key is the selection of individuals. It's all about involving people. Of course you come across issues such as some peoples' fear of change. A few people are simply reluctant, but the vast majority recognise the value in it."
Also filed in:
Topics
Features
Content
Case Studies
Sustainability