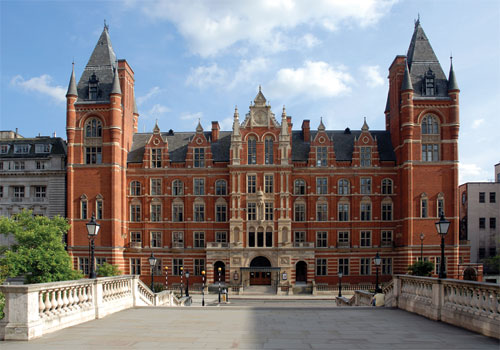 Three rooms at the Royal College of Music posed unusual challenges during a lighting refit. James Harris finds how LEDs solved the problem at the Grade-II listed building.

The Royal College of Music (RCM) is situated opposite the Royal Albert Hall and is host to some of the most talented musicians in the country.


Gustav Holst, Andrew Lloyd-Webber and John Williams are among the college's illustrious alumni whose playing has been heard in the college practice rooms throughout the institution's 118-year existence.

Designed by Sir Arthur Blomfield in the gothic revival style, the current college site was opened in 1894. The red brick building is squeezed into a small area on Prince Consort Road in Kensington, within the confines of the Imperial College buildings.

Visitors are greeted by the iconic Blomfield façade, which leads on to the college library, a museum - situated in the basement - and the Parry Room, used by the college for gala receptions and other special performances.

The Grade-II listed building, underwent a £5 million refurbishment project in 2009, and has been working with the Carbon Trust to lower its emissions. The goal was to reduce the site's carbon footprint by 34 per cent by the year 2020, with 2006 levels as a baseline. Lighting efficiency was identified as a key area for improvement.

"In 2009 and 2010 we started to look at ways to reduce our energy costs, 60 per cent of which was in lighting", says Matthew Nicholl, the RCM's building manager.

With a capacity of 120, the Parry Room has ceilings that are 6.5 metres tall, meaning scaffolding must be deployed for even a single lightbulb failure. Understandably, the longer life span of LED is particularly welcome here from a maintenance perspective. And so it's proved. Says Nicholl, "we haven't yet had to change a bulb since they were installed here, saving a fortune on maintenance."

The wood panelling inside the room meant that it was important the lighting used was not too 'harsh'. The LEDs used provide an ambient setting to complement the dark panelling.
Other rooms posed problems, too. It was vital that the shadows cast over sheet music and instruments were minimised.

Also, the antique instruments and delicate sheet music in the museum are very fragile, needing to be lit safely, since too much heat projected onto them could cause damage.
The reduced heat emitted from the LED bulbs has enabled the museum to be lit more efficiently and allowed light to be projected by uplighters directly onto hanging portraits.

Payback time
Financially, Nicholls believes that the payback on the RCM's investment will take just two years in the Parry Room, and five in the museum and library.

Replacing old corridor lamps has saved 5,000 kW per hour. Around 26kg of carbon emissions have been saved per annum through the lighting project. In fact, RCM installed fewer LED lamps than there were original bulbs, and has reported a £6,000 per annum reduction in energy cost savings. The success of the RCM installation poses the question: why isn't LED light flooding the market?

The trade-off is a classic one: a high initial financial investment reaping long-term benefits. In this case, low-energy bulbs with a longer lifespan leading to lower maintenance and replacement costs. But spending big on lighting, particularly one as new as LED, is seen as a risk. A charge of £20 per LED lamp is likely to dissuade budget holders from the purchase in exchange for the relatively small unit costs associated with traditional incandescent and fluorescent lamps.

RCM certainly thought the benefits outweighed the risks involved, investing over £15,000 into the project.

In April, IMS Research's report on the lighting market concluded that it will be a few years yet before LEDs become the country's most popular lighting source. Defining the standard for an entire industry is what LED lighting needs to do, according to the report. IMS also noted that while the retail price of an LED lamp is falling, it is not showing a decrease significant enough to propel LEDs into widespread commercial and domestic use.

Two sides of the story In the July 1, 2010 edition of FM World, a roundtable debate focused on the energy costs attributed to lighting. Back then, just two years ago, the event highlighted that within five years (2015) entire buildings could be completely lit by LED.

A major concern in 2010 was the quality of such technology and a lack of serious investment in new lighting from the industry itself. Martin Preston, sales manager at Lutron, suggested that "the flat-screen people like Samsung, Sharp, LG and Toshiba" would prove to be the major developers of LED in the years ahead.

Since then, there has been a marked improvement in the situation and a much wider awareness of LED's potential. David Clements, managing director of Future Designs, says that the technology is now ready, but that "they [LED lamps] are just too dear right now to offer the end-user a viable payback time." 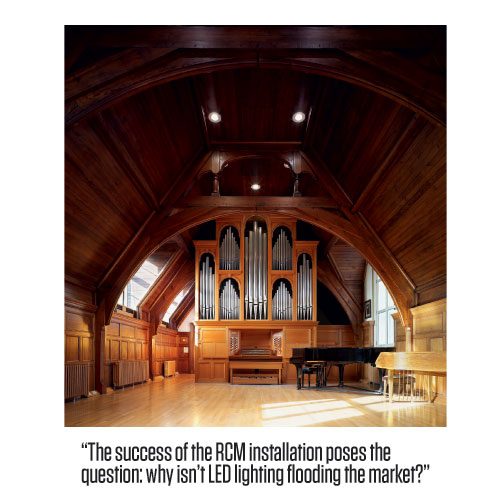 The right application?
The Royal College of Music is a unique case. Here, applying LED lighting to the problem at hand has proved to be a sensible solution for which the time has come. But for other environments, most notably the general office, concerns over brightness tend to overshadow the potential for energy savings in an office, particularly in Britain where many rooms lack enough natural sunlight in the dim winter.

In the retail sector however, it's a different story. Retailer Next recently invested in the installation of more than 100,000 LED lamps in a multi-million pound project, while 2012 also saw Capital Shopping Centres replacing original incandescent bulbs with LEDs.

Clements highlights the "predominant use of directional downlights" as the main reason why LEDs are starting to succeed in this kind of space.

'When' not 'if'
The debate has progressed over the last few years, centring not on the 'if' but rather the 'when' of mass LED adoption. The discussion has ebbed and flowed.

In FM World's 30 June 2011 edition, Jeanine Chrobak-Kando, business development manager at LED Verbatim, pinpointed "poor quality LED lamps" as the main threat to LED growth. With such products diluting the market, FMs are unlikely to be convinced enough of the case for LED to squeeze more from their already-constrained budgets.

In fact, from a manufacturer's point of view, the higher price is one of the few ways to prove that your LED lamp is better than the cheaper products on offer. Manufacturers are now including longer guarantees or warranties with their products in an attempt to build trust in the product.

"The old saying goes 'you get what you pay for' - there is still some real rubbish being offered," states Clements. "But LED technology is still moving at a fast pace."

IMS sees growth in the deployment of LED continuing, with the next four or five years predicted as a 'boom' period as project pay-back can be calculated in less than a year. Until then, it seems that the LED solution is being overshadowed by its initial outlay. We are just waiting to flick the switch.
Also filed in:
Topics
Features
Content
Case Studies
Sustainability