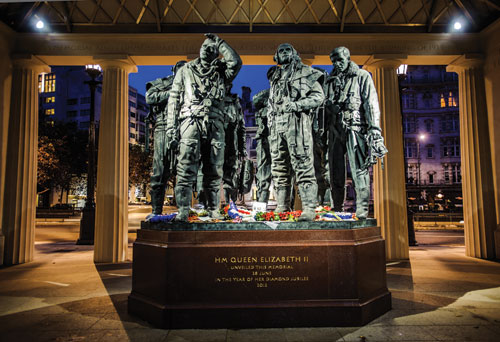 A memorial in London's Green Park commemorates the wartime actions of the crews of Bomber Command. Lucy Jeynes finds out what it takes to maintain it.

In June 2012, the Queen was in Green Park in London as part of her Diamond Jubilee year celebrations.


Sixty-seven years after the end of World War II (when the British monarch was still a teenager) the men of Bomber Command finally saw the dedication and unveiling of a memorial to their wartime services.

Many of the airmen who flew with Bomber Command during the war were little more than teenagers themselves: the average age was 22.

They were not all from the UK, but came from across the Commonwealth and from occupied countries including Czechoslovakia, Poland and France.

Life expectancy of aircrew during active service was two weeks, and 55,573 of those young men never came home. That's more than the total number of people that serve in the entire Royal Air Force today.

One man who lived to tell the tale was my father-in-law, although he, like many of his friends from those days, couldn't hang on quite long enough to see the unveiling of the memorial. A fly-past of a formation of modern Tornado jets and a wartime Lancaster bomber that rained a shower of poppies honoured the attending veterans and their families.

The memorial was designed by Liam O'Connor and is constructed to a classical design from Portland stone. Inside on a raised pediment is a magnificent, larger-than-life bronze statue group of seven Lancaster crewmen returning from a mission, by sculptor Philip Jackson. The scale of the sculpture and its position means that visitors look up to see these figures against the open sky.

Aluminium from a Handley Page Halifax that crashed in Belgium in May 1944 was used to build the roof, which evokes the geodetic structure of the Vickers Wellington. It is surrounded by an immaculately landscaped setting at the top of Green Park just by Hyde Park Corner opposite the Royal Air Force Club on Piccadilly.

The memorial has been visited by thousands of people since it was unveiled in the summer and was recently the most rated London attraction on Trip Advisor. With people travelling from as far as New Zealand and Canada to visit the Memorial, hundreds of people have left tributes, photos and memorabilia.

Serco, the international services company, has been tasked by the RAF Benevolent Fund, the guardians of the memorial, with maintaining it and keeping it in peak condition for the numerous visitors and veterans.

With Serco's track record of providing support services and its special connection to the Armed Forces, the RAF Benevolent Fund is confident this memorial to the many men who lost their lives will be maintained with great care, providing a place of comfort and solace for relatives.

Brian Newby, contract director, defence, at Serco, explains: "Getting involved with caring for the memorial was a priority for us. We really wanted to demonstrate our commitment to the RAF Benevolent Fund and to the veterans and their families by providing a service to those whom we owe so much, in the past, now and in the future - in doing so we truly reflect the ethos of our company." 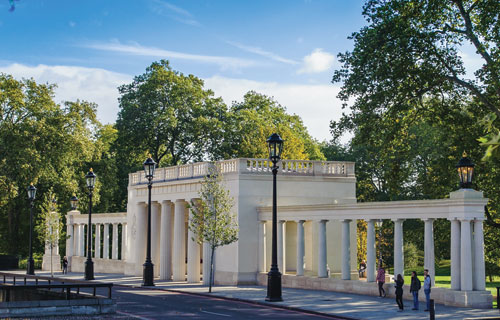 To fulfil the requirements of this five-year contract, Serco has employed the services of a number of sub-contractors (Barwins, Deloitte and Greenmantle) to carry out scheduled work. Also, as the memorial is situated within the heart of Green Park, Serco works in close liaison with the management and staff of the Royal Parks to ensure all maintenance and works are both sympathetic to and considerate of its privileged location.

Regular work includes removal of litter and sweeping the paved areas every day; grass cutting, weeding and garden-waste removal each week; a monthly regime of pavement, tree and lighting inspections; and annual washing down of stonework, sanitisation and waxing of statues, together with lightning protection and CCTV system checks.

Every five years; the memorial will require a drainage system jet-through, re-application of anti-graffiti coatings and repairs to paved areas and lights.

The main challenge to date was gaining access during the Olympic period when security in the Green Park area prevented vehicle access or, on some days, short-term parking.

Remedial and reactive work so far has included removal of dead and dying floral tributes, which if removed too soon would be disrespectful to the relatives, but leaving them too long will stain the stonework and present a poor standard of cleanliness.

Serco also provides a 24-hour graffiti removal service, should it ever be needed, through Barwins, which is also tasked with keeping the memorial swept and free from litter every day.

Deloitte provides the hard-FM elements of the contract, including power supplies, lighting, the CCTV surveillance system and drainage. The monument is lit externally by six lanterns, not including the four column lights on Piccadilly; internals lighting is provided by four LED floodlights to highlight the bronzes and two tall LED up-lighters, fitted in niches, providing background lighting.

External power for maintenance is provided through a Moser retractable supply post, concealed in the pathway. The memorial is monitored 24/7 through eight CCTV cameras: four watch the interior and four cover the external aspects. Live or recorded images can be viewed on the digital video recorder by means of a wireless link to the RAF Club, where monitors have been set up in reception.

The landscaping surrounding the memorial is carried out by Serco's third sub-contractor, Greenmantle, which has been engaged in the project from the outset.

Creating the setting within the park included the planting of an additional 25 mature specimen trees; remodelling 2,000 square metres (21,527 square feet) of Green Park, which included importing 1,200 tons of topsoil; re-turfing of 3,800 square metres (40,903 square feet), and installing hard-wearing ornamental lawns to either side of the monument.

Mature Taxus and Illex hedging and large, specimen topiary pieces were planted in the vicinity of the memorial to enhance the overall aspect of the feature.

Every week, Greenmantle manicures the lawns and topiary trees, together with weeding and mulching.

Mike Neville, chief of staff of the RAF Benevolent Fund, says: "As the proud guardian of the Bomber Command Memorial, the RAF Benevolent Fund is committed to preserving the memorial for future generations so that the story of Bomber Command and the noble sacrifice of 55,573 young aircrew will always be remembered. We're delighted that Serco has come on board as our contractor to help us keep the new memorial in peak condition for anyone wishing to visit it."

The memorial includes an inscription that reads: "We remember those of all countries who died in the bombing campaigns of 39-45". Germany donated a yew tree that takes pride of place in a garden of remembrance next to the monument in Green Park, as a symbol of reconciliation. 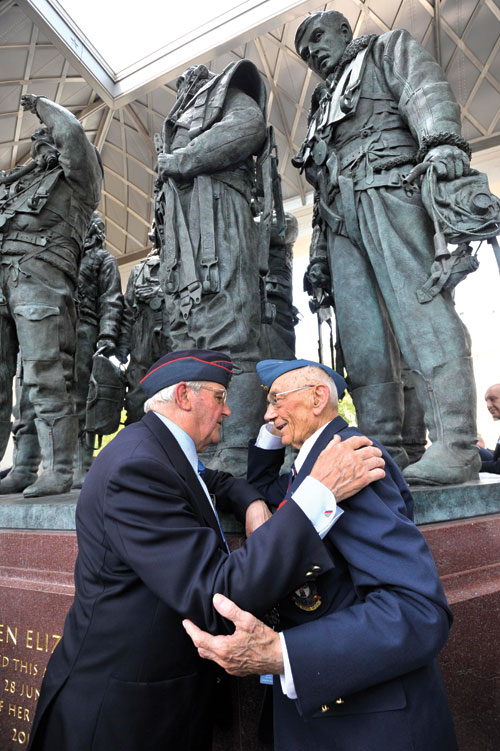 In response to the high level of interest, the RAF Benevolent Fund recently launched
an app for iPhone and iPad that lets users tour London's Bomber Command Memorial - either in person, or virtually.

The app contains an audio guide for visiting the memorial and exclusive interviews with veterans of Bomber Command, as well as the daughter of an aircrewman who never returned. To get the app, please go to the iTunes store or www.rafbf.org/app. All proceeds raised from the app, which costs 69p, will help the RAF Benevolent Fund to fund the upkeep of the memorial.

This website provides a detailed photo-documentary of the construction of the memorial, showing how the project come to life, from planning through to the unveiling ceremony. There are hundreds of photographs of the work at every stage.

This blog bit.ly/Wve4wN contains interviews and stories from the veterans of Bomber Command and is fascinating reading.
Also filed in:
Topics
Features
Content
Case Studies
Sustainability