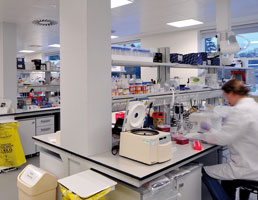 With influences from California and Cambridge, biotech firm Illumina's stylish new build and fit-out has brought an edge to its surroundings comparable with its scientific achievements.

The Gonville Building at Chesterford Research Park, near Saffron Walden, is the new European headquarters of the biotech research company Illumina. While the firm's move didn't amount to much in terms of distance, the new surroundings are light years away from the ramshackle home the staff had occupied since the late 1990s.


The new 42,000 sq ft development - two wings linked by a central reception block - consolidates Illumina's activities from four separate buildings sited a few yards away from the development on the research park set in the rural border of Cambridgeshire and Essex.

From that cluttered collection of cubby holes, the company now enjoys a comfortable, modern working environment flooded with natural light from all sides. It's one that is far more in keeping with the cutting edge nature of the firm's stock-in trade - developing solutions for DNA and protein analysis and sequencing the human genome. The Chesterford-based operation had started life in 1998 as Solexa, a commercial research project established by Cambridge University-based bioscientists. Solexa was acquired by a firm from California, Illumina, in 2007. Its customers now comprise academic, pharmaceutical, biotechnical and governmental institutions around the world. Graham Hirst is the senior manager for Illumina's facilities operations across Europe.

Hirst came on board last June, part way through the build project: "I came in for the last six months [of the 18 month project] so I was involved in seeing the project through to completion."
Hirst managed the move across from the original units so had seen for himself how the company had  outgrown its built surroundings. "Literally, we had laboratories in corridors," Hirst recalls, "It wasn't a place you'd want to bring clients to".

Yet Hirst had seen a glimpse of what was to come - the shell of the new building had taken shape when he attended his the initial job interview. So as far as he was concerned the size of the challenge and the anticipation of the move were equally clear.


But before the move from the old to the new could take place, a fit-out had to be taken to completion. HKS had picked up this brief to provide laboratories, office spaces, presentation suites and common areas, but to specification in keeping with Illumina's brand values - the drive for this came from the firm's San Diego headquarters.

Mark Simpson, HKS's director of interior design, says: "Illumina are very strong on brand and design - even down to the look of the product, the sequencers, they are beautifully designed and the branding is very strong."


And the US parent has big plans for Illumina in Europe so issues such as future proofing were crucial; notwithstanding the forward-thinking nature of scientific research the need to upscale and repurpose parts of the facility remains a key focus. The Chesterford site is very much seen as a backbone to support the company's anticipated further growth.
That's why, Simpson explains, adaptability was at the heart of his company's approach to the move: "It had to be as flexible as we could make it. So the office is not heavily cellularised, people can be moved around - people rather than desks."


The office wing is open plan, with linear footprint desking. And there are a lot of bookable meeting rooms, most are located adjacent to the central walkways, away from the windows. This leaves the brighter areas to accommodate staff desks. Yet any meeting room walls that are set parallel to the exterior walls are glass, meaning the occupants still benefit from a good deal of natural light. One nice touch, each desk pedestal has an upholstered top, so the unit can be wheeled out as a guest chair when the need arises.


Around 150 people were relocated from the original buildings and one of the problems the staff sought to leave behind was the splintering of collaborative groups. Simpson says: "A lot of planning went into who sits where. People had previously been placed in inherited space, two here, three there. Now teams are all together."


Hirst adds: "We had a lab team set up where each area of the business - R&D, chemistry, manufacturing, optics - were all represented. We made the labs multifunctional, so they weren't specific. They would meet the requirements of that department but also had flexibility."
Simpson continues: "These labs have a lot of fundamentals, air-conditioning, benching, fume cupboards, but they have the capability to upspec if they need to."


The project called in the assistance of a specialist consultant, Brian Jenkins: "He's someone who's built a lot of labs," Simpson explains. Jenkins' involvement provided what Hirst saw as an overlap across the project time before and after he himself came on board.


The working practices on the site mean scientific staff, who make up around 80 per cent of the headcount, stay mobile. Their time is split between the laboratory wing  where the research and testing is carried out and the corporate wing where the write-ups are composed, meetings are staged and international communications are made.


The relationship with Illumina's other sites has an interesting bearing on the working week. Hirst explains how booking a meeting room in the building before noon is easy. However, once California wakes up the demand on meeting space increases as the interaction with counterparts in San Diego comes into effect.

Across other borders, though closer to home, the next challenge for Hirst is the expansion of Illumina's distribution centre in Eindhoven. But it's not something that daunts him. The scale of operations at Chesterford is quite different to what he has been used to in previous roles in aerospace and pharma manufacturing. There he was more used to dealing with operational areas and headcounts ten times the size, as things stand, of Illumina at Chesterford.

Upgrading FM
Yet the rate of growth at Illumina in the past two years has been "incredible" according to Hirst. So importantly, the move has allowed the growth of administration and support functions and provided the opportunity to bring outsourced activities inhouse. Before Hirst joined, the FM function had been bolted onto the duties of a member of the scientific staff. But one of the features of Illumina's takeover was the more serious approach to facilities management as a discipline. It's a statement of intent.

As Hirst explains: "Jeff Hughson [facilities director for Illumina worldwide] was involved in the specifications and selection of the property management team, he appointed me. He was keen to see an FM appointed to see the project to completion and taking things on into Europe."
Simpson, adds: "Jeff has got a hold on the global real estate and facilities structure that Illumina has."


For the fit-out HKS were presented with a palette developed for San Diego headquarters but the intention wasn't to create a carbon copy, Simpson says: "We didn't play around with it too much. They came up with five different veneers but we went with two, for desktops and panelling. We tried to coordinate carpets - that was tricky as they used a specific manufacturer in the States and it didn't work for us economically. So we got something close."


Hirst adds, "One element Jeff was looking for is 'an Illumina building' - people walk in, they know it's Illumina. It's not as hard and fast exact same carpets or veneers but the same sense, feeling, impression you get is that you are in an Illumina building."


The vision is a reality, according to Hirst, as a recent visit trip to the San Diego left him with a sense of deja vu and he's received comments from visitors to Chesterford alluding to the essence of the Illumina brand being evident in this new building.

The family resemblance is clear to see. After all, as Simpson puts it, "it's in the DNA."

Scientific approach
The work undertaken at Illumina delves into the world of DNA and the human genome - the hereditary information stored within our chemical make up. As the firm's senior manager for facilities operations in Europe, Graham Hirst is keen to find time to learn more about what actually goes on within the labs.


"I intend to sit down with each of the teams and try to understand what more can be done. We designed this space for them and we've had positive feedback that everything's working. But I'd like to understand from a facilities perspective how they use it, what we can improve and what should we consider going forward." Hirst now takes his seat at regular management meetings alongside the senior directors across each group in the company, representing facilities and health and safety. And his involvement is proving effective: "It's surprising how keen they are to understand what it is that FM can do as a function, what improvements we are looking at and the partnerships we can offer."